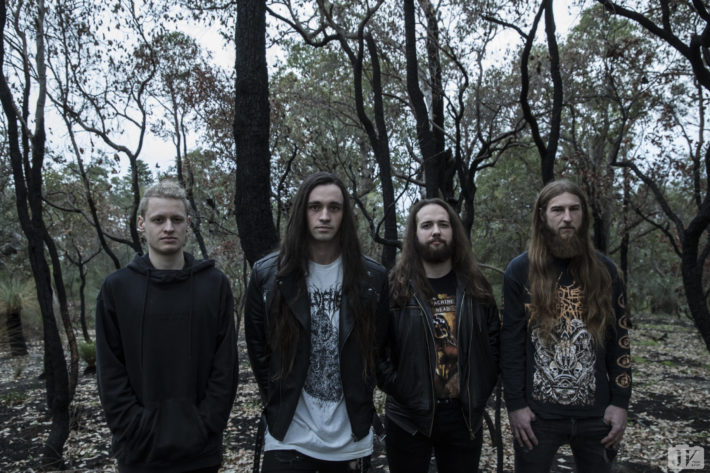 Australian death metal quartet Remission has taken the underground world by the storm with its debut album; here are some Q&A with the band.

Hello, this is Rick! Who am I talking to?

Hi Rick! You are talking to Jacson, I play lead guitars and do vocals for the band Remission.

About the album, “The Tether’s End”: what are its themes? What were your thoughts while writing it?

“The Tether’s End” covers a lot thematically.
It covers things mostly stemming from personal demons; depression, loss, grievance and personal growth. Also covered are themes of government corruption, global warming, and the general degradation of decency in human life that has been more evident the older I have become. Most of the themes and emotions present in the album are reflections of times that I have thought and felt strongly about the aforementioned subjects.

This album has received lots of appreciation and great reviews. How does it feel? Do you feel under more pressure now, thinking about its sequel?

It feels absolutely amazing. As the first album with my first band ever, it’s incredible to know that people are enjoying the music that we worked really hard on getting out there. If anything, it has made me more motivated to outperform ourselves with album 2. We are currently in the writing sessions for our sophomore, and the riffs are sounding savage as ever.

While this is your debut album, you actually already had an EP (“Genocide”, released in 2016) out, published in 2016: so you have been around for a few years, although after this album, things are bound to get serious.
What were some valuable lessons learned over the course of those years? Any advices you would give to artists starting out right now?

Many valuable lessons were learnt during those years. Nobody was there telling us the “right way” of doing things, we cut our teeth by figuring things out for ourselves and having our friends there to support us. So, if I had any advice for artists starting out right now – go out, get involved in your scene, meet all the people, make new friends, support your peers.
It all comes back to you one day, so set yourself up well within your community, and like-minded people and support will come naturally.

You are fresh off a(nother) Japanese tour: tell us about it, how was it? Was the audience different from the one you’re used to?

Japan this time around was nothing short of an incredible experience. Touring with bands that influence us as heavily as Revocation (and Cattle Decapitation for me, personally) is an opportunity I will cherish forever!
The crowds were great too. It seems as though the death metal fans in Japan are quite a lot more rowdy than the black metal crowd I’ve been used to seeing out there.

Right now, touring-wise there’s a bit of a situation because many tours are getting cancelled etc.; however do you have any festivals or shows you’d like to play?

There are many I’d love to play. Wacken, Summerbreeze, Metaldays, Resurrection fest, Hellfest…. The list goes on. I’d love for Remission to make it out to the European festival circuit in the next couple of years.

Remission started as a duo, with a drummer and a vocalist/guitarist; two years ago, in 2018, a bassist and another guitarist were added. How did the band manage before? When was it realized there was the need for more members?

Initially the band started with myself and our old guitarist, and Lewis joined on drums very shortly after we got together. We had an old bassist too, that lineup was the basis for forming the sound we have today and writing those older songs. Leading up to our first Japan tour, Lewis and I quickly realised that if we were to really take the band to the next level, we would need band members who were as committed and as motivated to “make it” as we were. Having Josh (Bass) and Curt (Guitars) come into the fold has been an absolute blessing. I feel that this is the lineup Remission was always meant to have.
We have never been more hungry to take on the world, and I believe that this is the lineup we are going to do it with.

You are currently unsigned. Are you looking for a record deal right now, or do you want to “walk on your own path”, continue as independent for a few more years?

Personally, I like the idea of choosing one’s own path, and doing things “your own way”. However, the benefits that come with being on a label are totally undeniable. To be frank, I’m happy to go down either path as long as I get to write music and play metal for crowds around the world.
We are currently working on our sophomore release, and we are in talks with some pretty reputable names to help bring it to the world’s attention when the time comes. Watch this space!

The future is looking bright for Remission. Released in 2019, “The Tether’s End” is out now. Click here to find the band’s Bandcamp, its Instagram profile and Facebook page.