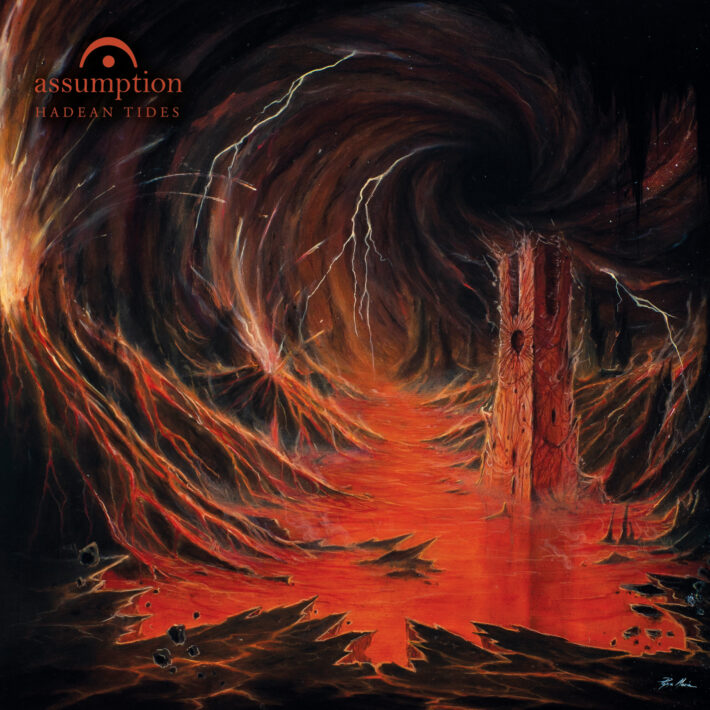 I really like death doom. You often have to be extra precise when describing the genre, because like many things, death doom is a spectrum. Taking elements from both death metal and doom, there are a wide range of sounds depending on how much you inherit from one or the other. There is the Peaceville Three sound that falls closer in line with doom, and is often intertwined with gothic elements. Inversely, some bands take more after death metal, striving to be as crushing as possible. Assumption are one of those bands.

Hadean Tides describes the first geological era of primordial Earth, according to the promo material, “of continual accretion, liquefaction, destruction and dissolution of a barely formed planet”. The record begins with an incredibly promising start, on a mid-tempo death doom track akin to Mortiferum. “Submerged in Hadean Tides” has a fantastic riff that recalls the best of Hooded Menace, before transitioning into a crushing crawl. The middle track “Breath of the Dedalus” takes a turn, as the track is fully ambient aside from some creepy choir singing. “Liquescent Hours” brings back the awesome riff-driven style from the first two tracks, but it’s quickly undermined by what may be the most baffling stylistic choice I’ve encountered this year on the subsequent track “Triptych”.

The sixth track on this album begins with spoken word poetry over a repetitive little bass rhythm, and this goes on for about five minutes. The promo material says that Assumption were influenced by the poetry of William Butler Yeats, T.S. Eliot, and Rainer Marie Rilke, all modernist poets from the early 20th century. The poetry isn’t bad, it’s just the delivery that is just… not working for me. It’s uncomfortably close to your ear and at one point he just hisses into the mic for like ten seconds. It’s creative, sure, but it just doesn’t sit well with me, and I end up wanting to skip it every time I listened through. There’s even actual music on the track, and it’s even pretty good, but it comes in the last 90 seconds of the track, almost as a reward for those tortured souls that endured Assumption’s best attempt at a death doom Lulu.

The outro is a fourteen-minute-long monolith of funeral doom riffing that works well stylistically but in practice just doesn’t offer enough to keep my attention. The placement of “Triptych” leading into “Black Trees Waving” is ultimately a poor decision, because the failures of these two tracks (the former being absurd and the latter simply being boring) make the album crawl to its end, and it leaves a major blemish on the whole experience. It’s a real shame, too, because the first four or five tracks are awesome, but they’re seriously weighed down by inconsistency and questionable decision-making towards the back half. I really wanted to like this, I really wanted to give it a good score, but it ends up being an inconsistent experience with moments of greatness.