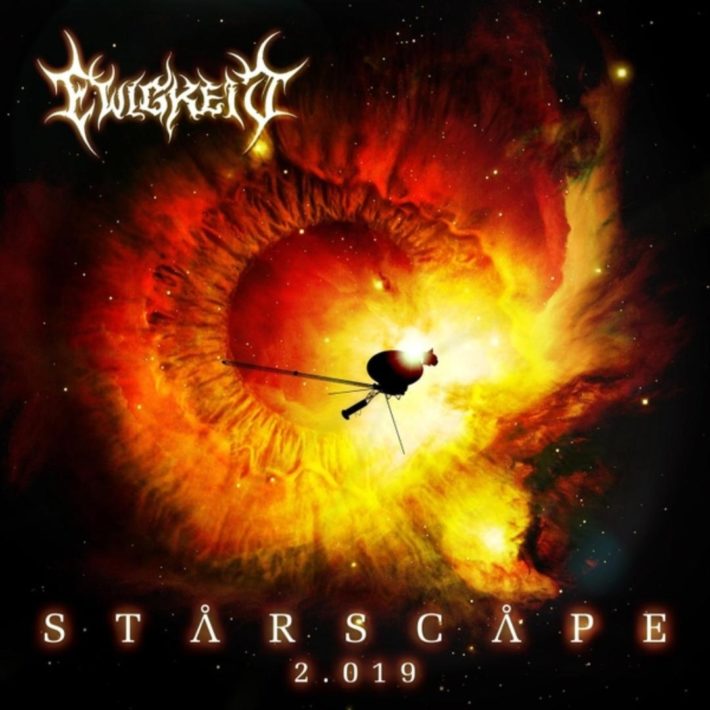 Ewigkeit’s second full length album Starscape was originally released in 1999. Various sources have placed it under many different subgenres, usually some combination of progressive experimental symphonic melodic black metal. For those of you who are not entirely sure what all of those terms mean, progressive means that it was pretentious, symphonic means it was cheesy, black metal means that the production quality was terrible, melodic means that a good number of metal communities didn’t take it seriously, and experimental means that nobody bought the album. With a 20th anniversary remake of that album, Starscape 2.019, Ewigkeit hopes to be a little less black metal that in the original recording, and with that, a little less experimental as well.

Normally with a remake I would want to compare the new version to the original. However, sole Ewigkeit member James Fogarty (Not to be confused with John Fogerty of Credence Clearwater Revival, or Jim Fogarty of the Philadelphia Athletics) created a similar 20th anniversary remake of the first Ewigkeit album Battle Furies in 2017. On that album’s notes he stated “it is designed to replace [the original album]…Please destroy/delete all remaining copies of the original.” Assuming his intentions are the same on this one (he called the original Starscape album “unlistenable” in the promotional material, and further claimed that this album is a “part of his personal crusade to rescue his legacy before ‘I start getting too fucking old,’”), this album is going to have to float or sink on its own merits per the artist’s wishes.

Luckily, it’s merits are plentiful. There are two aspects of Starscape 2.019 (definitely a progressive title) that would bring down an album in the hands of a lesser artist, but which actually improve the experience in the hands of Fogarty. We will return to those later. First, a more broad overview.

Despite all of the labels that can be given to Starscape 2.019, at its core this is a symphonic black metal album. The symphonic elements are used to create melodies that can be downright beautiful. These melodies do seem to be the focus of the Starscape 2.019, and they are used to explore the spaces that the background and electronic noises provide. This is a black metal release and no one will confuse it for anything else; however, Starscape 2.019 feels a lot gentler and kinder than most melodic black metal. Everything is mellower and more toned-down than the genre tends to be.

The production on Starscape 2.019 ends up being acceptable, which is a bit lower than ideal for an album that is essentially a second chance. The guitar tone isn’t always the best, and some of the ambient sounds get lost in the hectic moments. Sometimes the electronic, artificial that is created by the ambient sounds and electronic parts feel permeates places it’s not supposed to, such as the vocals. This seems to be intentional sometimes, but it still ends up being distracting at best.

As mentioned, there are two aspects of Starscape 2.019 that shine. The first is the atmospheric or ambient elements of the album. On most albums, ambience is used instead of melody. If the artist isn’t careful, this can go from creating a musical mood or backdrop to simply being boring. Here, however, the ambient elements are used to support the melody. This is to the great benefit of both. The songs are simultaneously catchy, weighty, and progressive.

Mr. Fog has made a great attempt at preserving his legacy. This album is a joy to listen to. However, it will probably appeal more to progressive music fans than black metal fans, partially due to the varying musical influences and sounds expressed in Starscape 2.019, but also due to Fogarty’s less than kind words towards the metal scene when he originally retired Ewigkeit in 2007 before bringing the project back in 2012. Regardless of his, er, progressive and melodic past, however, Fogarty has created an interesting experience that always keeps the listener’s attention, even when taking risks that albums by a less talented creator couldn’t afford to take. It may have taken twenty years, but we have an enjoyable album here.