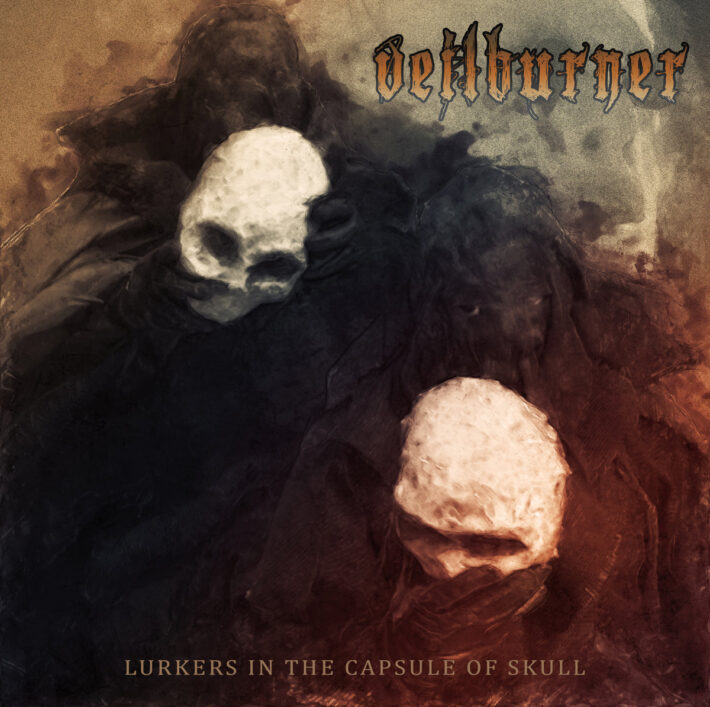 Pennsylvanian black/death metal band Veilburner have been around the block a few times. They’ve released an impressive five albums since their inception in 2014, with the most recent, 2018’s A Sire To The Ghouls Of Insanity, being a welcome delve into the odder styles of metal. That’s continued with their new Transcending Obscurity release, Lurkers In The Capsule Of Skull. However, a consistent and relatively prolific release schedule in this genre can be a point of concern. Have Veilburner continued to light off-color flames in the dark, or are they treading in the same space so often that they wear the ground thin?

Fans of more dissonant styles of black and death metal will flock to Veilburner. The band has usually revelled in weirdness, and Lurkers In The Capsule Of Skull does not change this. The album slithers through genre-appropriate atmosphere, giving listeners who hope for the weird stuff exactly what they need. This record pummels when it needs to, writhes when it wants to, and dances like it has four broken hooves but in a good way.

Veilburner sometimes let their sound take them into jazzy, catchy places. These moments, along their more rambunctious blackened death shenanigans, created my best memories of Veilburner. When this band remains focused, they create delightfully alien melodies that you can believe sound typical in an alien alternate universe where everyone has five arms and the Jacksonville Jaguars regularly make the playoffs. In these times, Veilburner reminds me a lot of Ad Nauseam: Uncompromisingly weird, but with a sense of purpose and vision. Ugly and distorted, but only due to the lens through which the listener observes the band.

All of those amazing moments put together don’t add up to enough of the record. In other words, Lurkers In The Capsule Of Skull lasts way too long. Unlike other too-long experiences, Veilburner doesn’t tire or wear down the listener. Instead, the sound settles into normalcy. The unusual guitar tones become run-of-the-the-mill, leaf subsides to leaf, weird and murky mysticism becomes commonplace, and eden sinks to grief.

The quieter Veilburner sound just doesn’t interest me. This isn’t something like The Work That Transforms God, where the bleak absence of melody creates something interesting and unsettling. These passages are also unlike Ad Nauseam, who continued to instill an otherworldly angle to their sound. Instead Veilburner just play the expected noises. When the band plays loud, aggressive riffs, or has enough movement in their melodic lines, the dogmatic approach to dissonant metal works really, really well. When the band starts venturing into other zones and loses all of their strengths, I wish for better times.

Lurkers In The Capsule Of Skull simply does not deliver on its promise enough. This album needs to be a revelatory journey through unknown space, or at least through space where the weird and freaky stuff maintains effectiveness after it stops being weird and freaky. Many, many dissonant bands have come before this. Veilburner sounds like most of them. Nothing wrong with that, it just means that they need something beyond said dissonance to separate themselves from the pack, and that something never arrives. Instead, the dissonance becomes normal and routine, and the record becomes merely fine when it could have been a breakthrough release.

Lurkers In The Capsule Of Skull falls into a comfortable groove. The odd moments sound like welcome old friends, but with that the bit and soul of the album disappears. Despite that, I enjoyed Lurkers In The Capsule Of Skull, and would recommend it to anyone looking for dissonant bands. I’ve heard it said that this type of music, and non-traditional music in general, simply speaks a different language than more traditional-sounding bands. If so, Veilburner’s words are recognizable anyways.