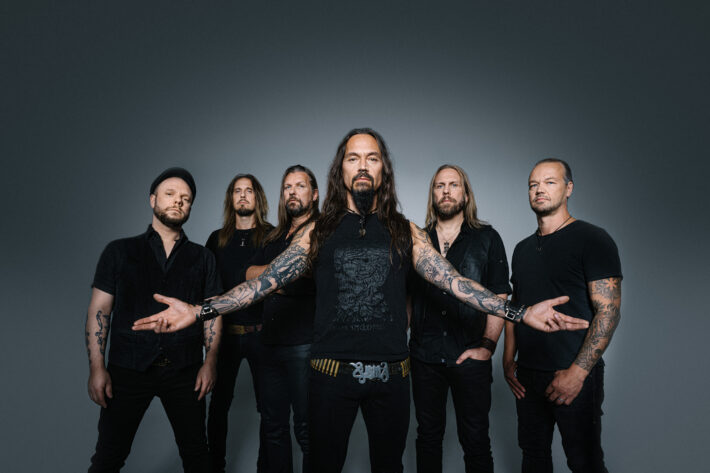 Amorphis, the Finnish titans of Melodic Death Metal need no introduction. They released their fourteenth album Halo in February and it was met with great reviews. I had the pleasure of having a chat with founding memeber drummer Jan Rechberger.

How has been the reception for Halo?

I’m actually a bit surprised. The previous albums did really well too, but I was a little bit worried on how this album would do. It is more challenging, more different. It doesn’t “peak straight away”.

Halo is like the third album in a sort of trilogy after Under The Red Cloud and Queen Of Time. Yet it reminded me of the previous bits of Amorphis’s history.

Some of our albums, like Eclipse, Silent Waters, Skyforger… that that era feels like a trilogy for me.
The Beginning Of Times is the lonely one and Circle too; those albums are to me two different phases of the band, in the middle of those like trilogies.

These are strange times to record a new album: you did some production remotely.

It was different; for the previous two records Jens [Bogren] came with us in Finland and every little detail was practiced before we went to a studio.

This time there wasn’t the immediate reaction of when you are recording with the producers around, and the ideas are flying. A lot of ideas were tried and a lot of ideas were abandoned: there were a lot of short-terms, quick ideas.
Producing with Jens made it easier because from the experience of the past two records we already knew that we could trust him.

Your albums are total work of art, from the cover art to the lyrics.

There’s a lot of effort behind it, lyrically, and we have a lot of composers in our band. That’s mainly the reason behind it that the material stays somewhat on the strong side: you can make a great album with a lot of great songs coming from different minds.

How does the drum work together with with all the other instruments?

It’s mostly about the composition.
When somebody composes your demo, they just put some beats in the background and make their riffs on top of it to present the song. So you may want to pick the best ideas and then add to that, or take something out.

It depends on what sort of mood is needed for that song… in some songs there is more room for drums, sometimes not.
There are the key moments in some songs where it is way more effective to go simpler than to try to play too much.