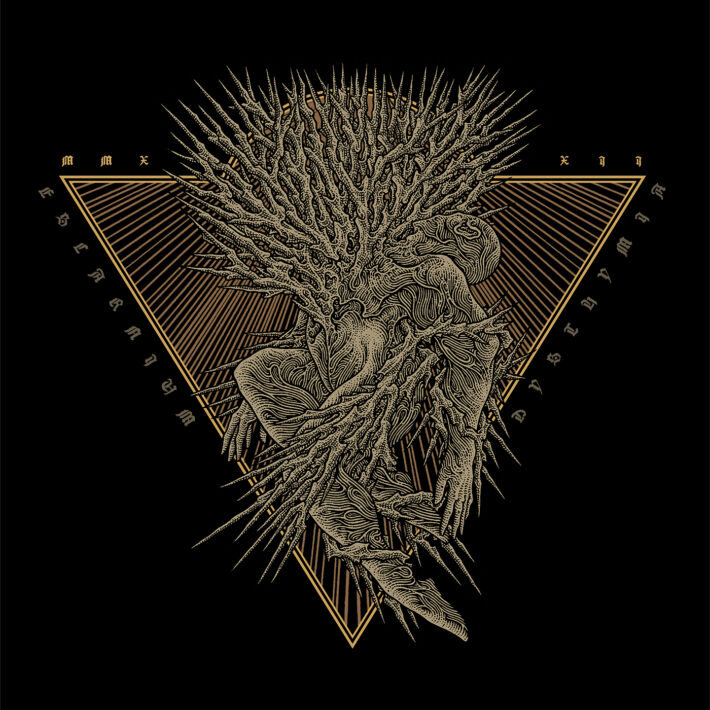 Escarnium are an old Brazilian death metal band with a solid track record and something to say. Their brand of death metal is straightforward, but with all of the anger and urgency necessary to extract potential out of their genre. This isn’t cavernous, and it isn’t technical. Instead, Escarnium rely on their emotional push to get their music to its peak.

Let’s start at the end. Dysthymia finishes with a cover of Grave’s “Into The Grave,” shifted into Escarnium’s style. This cover works very well. While it is more or less a straightforward rendering of the original, Escarnium apply their own tone to it. The result is a blending of the two band’s styles that showcases Escarnium’s versatility in their playing style. This band has the ability to make something quite different than the norm, but that still bears their mark.

This cover track also reveals Escarnium’s focused approach to songwriting. They could have a wild variety of showcases on Dysthymia, but the group simply chose not to. Dysthymia does not last long, the band has written a precise, drilling sound instead of exploring what they can do. The result is an album with a strongly rooted identity.

The band gives effective, if standard, performances. The guitars buzz along and play their riffs well, never overtaking the sound when other instruments are more important. Vocals are standard death metal growls and don’t hinder the performance. Drums pound away under everything, not quite breaking through and wowwing me, but still creating a blanket of sound and keeping the pressure up. The bass allows the band to achieve their full atmosphere and create a filled-in sound, but this isn’t some bass guitar showcase.

Dysthymia has a dark and dense sound. The riffs are solid enough, but the atmosphere and overwhelming feeling of completeness matters more. This aligns well with the album’s subject matter. Escarnium did not create a happy record, and they take on everything from covid to “murderers disguised as messiahs” here. At times, Dysthymia feels less like music and more like a primal scream.

Unfortunately, that doesn’t always translate to an effective experience. This record has a lot of soul, and the band obviously cares about their product, which makes it more painful to make this next point. Dysthymia is just forgettable. Nothing on this record is something that I haven’t heard done better elsewhere, and nothing stands out as excellent. That Grave cover ends up hurting this record. If the band has that level of flexibility, why don’t they showcase it? Their topical and emotional output are great, but their songwriting comes off as stunted.

I couldn’t help but wonder if this is really it whenever I listened to Dysthymia. The album is quite short, even with the cover song, but it still seems like the band didn’t have enough ideas, leading to further suspicion about the songwriting process. Escarnium obviously can play more memorable music than they do here, I’m not entirely sure why they feel so restrained on this release. The disconnect between the topical fury and power and the musical approach that borders on unimaginative at times is larger than on any other album I’ve reviewed.

Escarnium have a lot to offer, so I’m not sure why the record didn’t land better. While Dysthymia ends up being a solid release, everything other than the subject matter seems like a diminished version of what the band is capable of. I recommend this to people looking for dark death metal or people who complain about soulless technical death metal at every opportunity. While Dysthymia has been a fascinating record to look at, that won’t keep me coming back to enjoy it in the future.