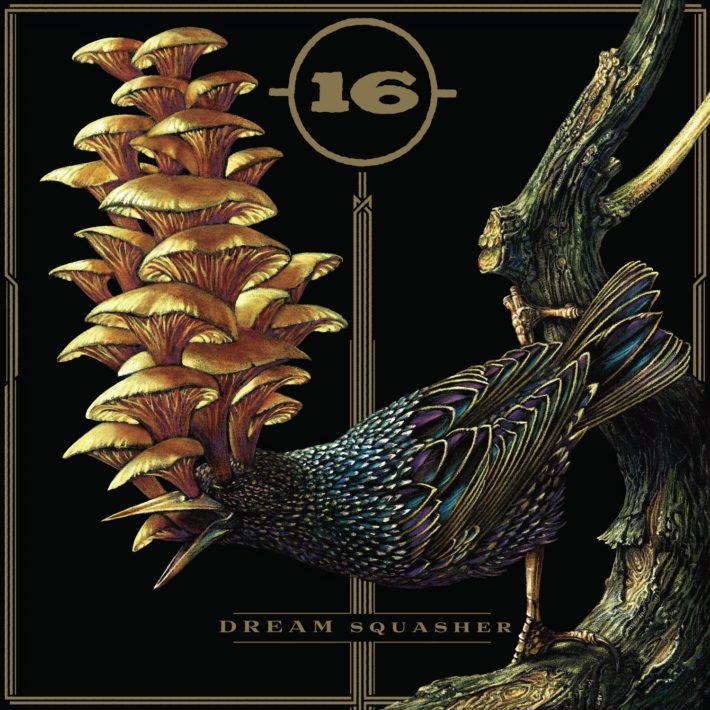 Sludge/hardcore band -(16)- has been around for quite some time. The band was founded in 1991 in Santa Ana, California, and has since built quite the repertoire. Over the years, they have released seven full-length records, and a respectable amount of splits, each with a different band in the genre. The band has had quite a number of lineup changes and has even been on hold for a few years, but that didn’t stop them from making music. In fact, all the struggles the band has been through, they’ve been able to express in the music, giving it such an aggressive and crushing sound, both musically as well as lyrically.

This Friday, -(16)- releases their eighth studio album, Dream Squasher. The album is a testament to the power of loss, and is yet another piece of evidence that -(16)- isn’t afraid to delve into the negative aspects of life. However, there is an interesting story regarding one of the singles that have already been released, called Me & the Dog Die Together. Guitarist and vocalist Bobby Ferry explains that “a conscious effort was made to inject positivity into the lyrical themes. The best thing we could come up with is loving your dog so much, you’d end up killing yourself if the dog dies.” At first glance, that might not be too positive, but if you think about it, you would have greatly enjoyed the last decade or so of your life. In any case, I think it’s the perfect form of positivity for a band like -(16)-.

Dream Squasher starts off with Candy In Spanish. The rhythm of the guitar riffs, in combination with the drum beat, creates an interesting groove, with which the band immediately showcases that their music isn’t as straightforward as one might expect. Meanwhile, the chorus does have a more simple rhythm, giving the song some variety already. The next song, Me & The Dog Die Together, is a good headbanger, with both the drums as well as the guitar having a faster rhythm. Ferry’s vocals sound angry, deep and raw, only increasing the energy level of the music. Sadlands is one of the songs that stand out on the album. With its slower tempo, it tends more towards doom than hardcore. The vocal melodies remind me of Ozzy Osbourne’s solo career (except they aren’t as high as Ozzy’s). About halfway through, there’s a guitar solo that plays over the rest of the band, showing that the band can compose more than just heavy riffs. Another track that’s out of the ordinary is Acid Tongue. The verses consist of some very energetic drumming and guitars that keep pounding chords over which, instead of regular singing, you can hear what seems to be a dad ranting at his son that he should get a regular job. This once again adds to the negativity of the record and the impact that the music has on the listener. Upon listening to Agora (Killed By A Mountain Lion), I couldn’t help but think about the whole COVID-19 thing. In the chorus, Bobby Ferry sings “I won’t have any trouble living in a fucking bubble, I don’t like going outside.” Now, whether or not the band actually wrote this during lockdown is unclear, but it’s definitely applicable to our current situation. Although the second half of the record is also groovy and entertaining, its essence and strength definitely lies in its first half, for the last four songs don’t really have many interesting aspects.

In general, Dream Squasher is a good headbanger, with a little extra. There’s diverse rhythms, songs that vary in tempo and groove, and some passages with spoken word. It’s got a few interesting songs, but other than that, there isn’t a lot that invites you to put it on again. It’s a fun album to listen to a few times, after which you’ll probably forget about it.