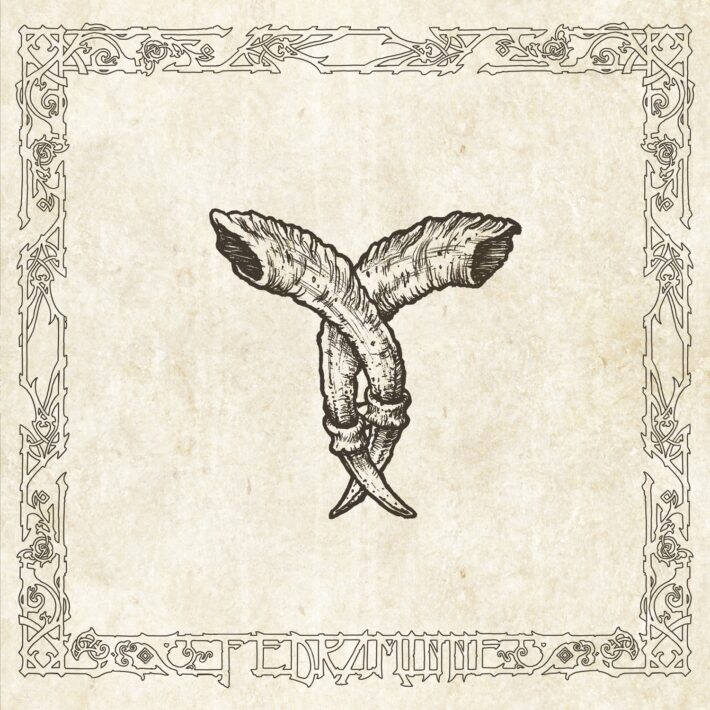 Just to get this out of the way immediately, Fedraminne, the debut full-length from Varde, features “immense primordial forces,” and involves the “channeling of ancestral memories” and “memories from their forefathers.” Hearing a black/folk metal band talk about their music this way, or hearing any band talk about themselves this way when their lyrics are about “national romanticism” according to encyclopedia metallum, raises certain red flags about the band. Doing some quick research into the band and the label lowered those flags again, or at least did not substantiate my potential issues with this group. It would be nice to not have to worry about said issues, but given the world we’re in I’ll take accepting a band that seems not to have them and go from there.

As mentioned, Varde are a black/folk metal band from Norway, and Fedraminne are their first release. The music stays mostly slow-paced and expansive. I am no expert on 19th century Norwegian poetry, or the music of that time and place, but it sounds as if Varde have done their best to play up to their promo blurb. There is a nice mixture of distorted and clean guitar, and of their black metal and folk music influences. Music of this style will hinge on how well they blend those influences.

Varde nails the feeling of ancestral visions. Again, I don’t know the specific traditions that they call back to, but they do have an ancient sound to their music. This is helped by their simplistic-enough riffs and the somewhat spacious and repetitive pulse that keeps the music driving forward. The music feels less like a metered excursion, and more like a solitary figure wandering on a dirt path.

The riffs at the core of Fedraminne form both the best and worst parts of the release. They are on the simple side, and as a result they are quite memorable and catchy. This furthers their connection to the folk music of days long dead, but it also allows the listener to keep their grip on the songs as they keep on going. These songs get quite long, and the simple riffing allows the listener to keep a continuous thread from beginning to end. Unfortunately, the riffs don’t quite work as well as they should. If your riffs are going to be simplistic, catchy, and the backbone of your sound, then they need to be good enough to hold that weight. To Varde’s credit, some are. But some aren’t. When the riffs fail their tasks, the music tends to sink into the mud.

I may be presenting the music as more monotonous than it actually is. Sure, the riffs are important, but they aren’t the only thing going on here. They aren’t always the backbone of the music, it just sounds like it at times. Unfortunately, the album gets worse when other aspects of the sound take over. Mixing two disparate times is difficult. On Fedraminne, the mix does not work. The folk influence relies too much on the contrast with the black metal to remain interesting, and vice versa. The truly great hybrid-genre albums (hybrid of any sort, not just black metal) would maintain their interest as either one of their parent influences. Varde isn’t exactly making hybrid music, but with their varying influences the principle remains the same. It feels as if both the black metal and folk influences are leaning on each other and trying to gain support from the other, while neither really has the strength to hold the other one up.

Nothing on Fedraminne fails spectacularly, these flaws feel more like they’re only a step out from where the band needs them to be. Varde remains young. Some of their members have decades of experience, but as a group they still fight to find their footing in an ever-changing musical world. For a debut album, Fedraminne exceeds my expectations. I look forward to Varde’s future albums, but this one doesn’t quite click the way it feels it should at times.