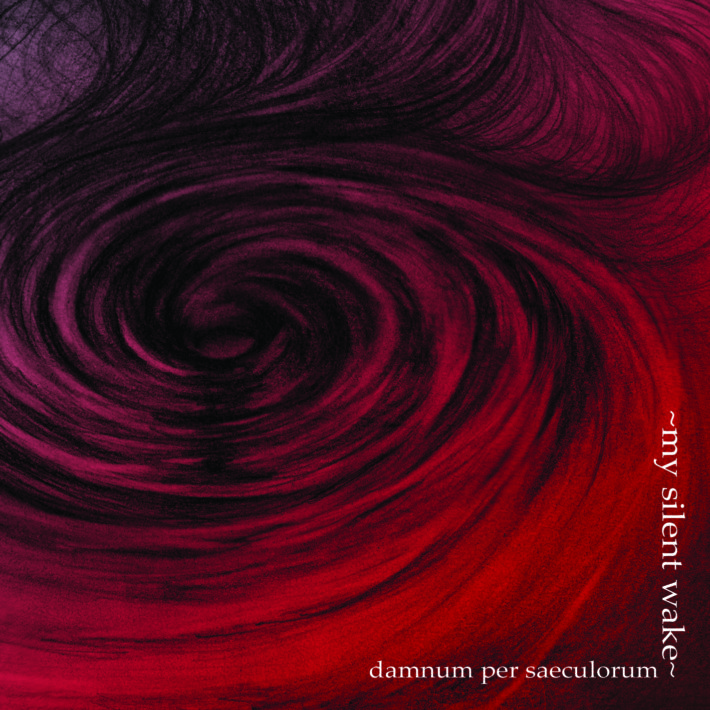 We live in difficult times. Between the Coronavirus epidemic, mandatory quarantines, riots, and economic downturns, 2020 has been an unforgettable year for all the wrong reasons. Any kind of respite from the daily drudgery is more than welcome, which is why My Silent Wake’s new acoustic/ambient album Damnum Per Saeculorum arrives at the right moment. The album provides a moment of peace amidst the turmoil of the world, a breath of fresh air to purify the lungs and to remind us that beauty and suffering are often two sides of the same coin.

My Silent Wake is a death/doom band from the UK that has been releasing quality music since 2005. With front man Ian Arkley (Seventh Angel, Paramaecium) at the helm, My Silent Wake has released 11 LPs, several EPs, 4 compilations, and 2 split albums. Personally, I’ve been a fan of the band since I first heard A Garland of Tears in 2008. While most of their material has been death/doom in the vein of My Dying Bride and Paradise Lost, they have also released acoustic albums in the past. Most notable are the albums Preservation Restoration Reconstruction (2013) and Invitation to Imperfection (2017). However, the band has been experimenting with the concept since The Anatomy of Melancholy (2007), which featured two discs; one was a death/doom album and the other side was acoustic.

Generally, I prefer to write about every track on an album, but Damnum Per Saeculorum contains 15 songs of varying lengths.  Therefore, it makes more sense to discuss the album’s merits in general and then to focus on some of the highlights of the album. Damnum Per Saeculorum is one of the most experimental My Silent Wake albums to date. It has acoustic, medieval, classical, ambient, choral and drone influences. Most of these were previously present on Invitation to Imperfection, but the band melds them together more seamlessly on this release. One notable improvement is the inclusion of multiple guest vocalists. Now, I will be the first to admit that the album is not kind to casual listeners. Some of the songs finally started to click for me on the third or fourth spin. There are multiple layers, underlying textures that defy easy listening. But if you’re willing to put in a little time, and truly immerse yourself into the music, then Damnum Per Saeculorum is a rewarding listen.

So, let’s talk about some of the songs individually. “Warhawks” is one of the more standard songs on the album. It’s familiar territory for the band and sounds like previous material on Preservation Restoration Reconstruction. The multiple layers of vocals lend a strong performance to this track.  The drumming and acoustic elements combine to form a medieval vibe, and it’s also the only song on the album to feature Arkley’s death growls. “Bacchanal” is a vibrant song that refers to Bacchus, the god of wine, and the drunken revelries of his followers. The melody, along with the percussion, evokes the image of a Roman court with twirling, sprightly dancers providing entertainment for intoxicated Roman patricians.

“All Our Fears Are Over” is an experimental track. It begins with atmospheric drumming that segues into heavy bass guitar. Whispered vocals enter like wisps of fog from the sea and lend an unsettling vibe to the song. More instruments and sounds are added as the song continues, increasing its complexity. This is a formula that My Silent Wake uses multiple times on the album, and for the most part, the added layers provide depth and intricacy to what begin as simplistic songs. The track “Of Loss and Regret” is another example. It begins with a singular droning noise, and then adds acoustic guitar. Percussion is up next, and then distorted spoken vocals. Later, some elements are taken away, and an ethereal chorus dominates the song, but the droning tone never dissipates.  The nuanced touches are artistic and symbolic – “Of Loss and Regret” is one of the highlights of the record.

I enjoy songs like “Fall in the Sea” for their simplicity. Entwining acoustic lines, coupled with Ian’s haunting singing, are classic My Silent Wake material and are enchanting. It also lets the listener breathe, as it is nestled in-between more experimental pieces. “To Feel the Caress of Long Dead Lovers” is an ambient track that reminds me some of the softer material on Seventh Angel’s The Dust of Years. British accents are mysterious and alluring; this American enjoyed the rich timbre that the guest vocals added to the song.

“The Rhyme of Winter’s Children” is a lament that does not try to hide its viewpoint on suffering. The operatic performance in the background is a startling contrast to the beautiful singing by the female vocalist. My Silent Wake published some of the lyrics to the song on their Facebook page. The lines “Walk the writhing trail of weeping / Now to where doth thy hand lead? Hear the rhyme of winters’ children, / Watch the shallow spirit bleed” resonate with pain and sorrow. It’s not often that lyrics are as haunting as the music, but “The Rhyme of Winters’ Children” achieves that feeling. The final highlight of Damnum Per Saeculorm is the epic track “Berceuse,” which is the French word for lullaby. The beginning of the song is beautiful and poignant. It’s easy to imagine that the vocalist is singing to lull her baby to sleep as she rocks him back and forth. Perhaps she stops for a moment to kiss his brow. After this interlude, she cradles him to her breast as the violin and keyboards create a rich sonic palette. The fortissimo operatic vocals that burst forth suddenly in the middle of the song, like floodwaters from a dam, add a complexity in dynamics that was unexpected. “Berceuse” is a masterpiece and a fitting way to end the album.

Damnum Per Saeculum is a haunting, beautiful soundscape that provides comfort in these dark times. It may not be for everyone, and it takes time to fully grasp its complexity.  However, once you get past these minor hurdles, the acoustic/ambient album takes on a life of its own. I’ll be returning frequently to its mysterious and ethereal sounds, if only to see if there is something new to discover. It’s not often that a band can produce different kinds of music so effortlessly, but My Silent Wake has a proven track record of doing just that. I’ll be looking forward to their next metal production, and I hope that they decide to intertwine it with some of the sounds present on Damnum Per Saeculum.