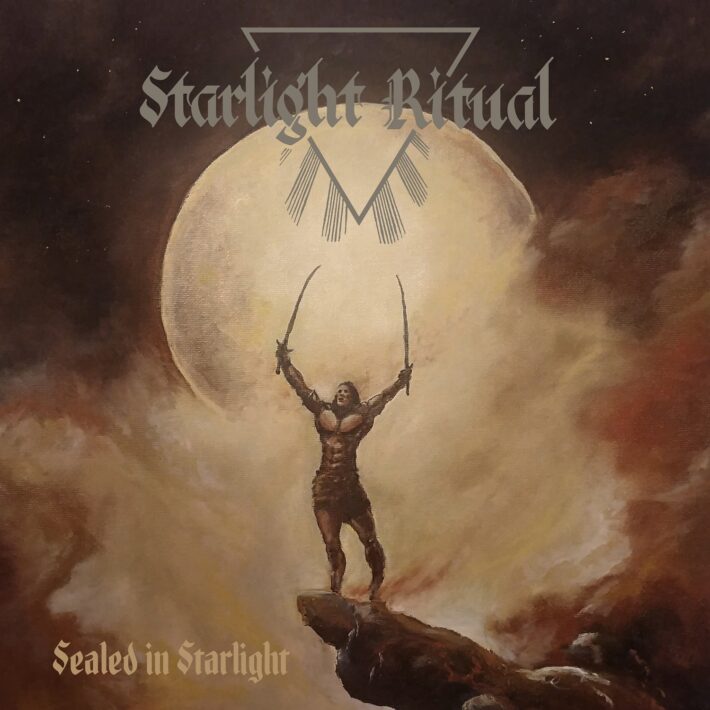 Sealed in Starlight is the debut album by Starlight Ritual, a Canadian band formed in 2014 who already had two EP published: a full length was just what they needed to really get things going!

The album cover, which I quite like, has strong classic metal vibes to it – and that’s exactly where this album leads to, towards that mix of hard rock and heavy metal typical of Dio-era Black Sabbath and pretty much anything Ronnie James Dio sang in (keep this in mind, it’ll serve us later).

The Bell is the one-minute-long intro that opens the album; personally, intro songs have never been really my thing, especially if they aren’t mini-masterpieces (looking at you, The Hellion) and even then, why not merge them into the next song? I do have to say, this one is not too bad because it does sound extremely epic and has a “be prepared” feeling, so it’s not just ambient noises.

The first actual song, Marauders, has a no-compromising, crushing heavy sound; very classicistic and energetic, there’s almost a hint of Grim Reaper in that crispy guitar sound and belt-out vocals.
This is probably my favorite song on the album, which highlights both a positive quality and a problem. In a positive light, the best song on this album is an actual great song; not just the less mediocre one but a true good one. However, the fact that no song after the opener can match its greatness inevitably means that the album is a, albeit gradual, decline in terms of quality.
And sadly this is the case, meaning that all the other songs, even if they do sound good and they are nice to listen to, gradually fades into the back of the mind, not managing to be as memorable as this one.

The next song, One For The Road, is one I do like, but it has an embarrassing problem: it’s really, really like Long Live Rock N Roll by Rainbow (I did say to keep RJD in mind!). By all means I don’t want to scream plagiarism here, and all the resemblance might be in good faith, but it just can’t unhear it. The verse especially. Other than that, the sound is just as I like it, but it’s difficult to go past that.

Skipping directly to the title track Sealed in Starlight, here’s a funny story: the covid vaccine knocked me out for about two days, during which I didn’t listen to music basically at all. The chorus of this song, however, made sure never to leave my head. In bed with a high fever, my mind was still going “sealed in starlight / cry out to the sky”: that’s kinda impressive!
Contrary to what the title might say, the music and the vocals here are less shiny and fuzzier, creating a contrast that I appreciated very much; the song keeps the general homogeneity of sound that this album has. Sealed in Starlight is slower than the others – if it had less guitar it might have even been a ballad. Sadly, after listening to the album a couple of times it becomes clear that the chorus does get stuck in your head, but the song lacks the energy of its companions and the epic effect it strives to achieve is only partially obtained.

Two songs from the rest of the album, Lunar Rotation ad Civilization Lost, had already appeared on the band’s previous EPs (Age of the Universe and Starlight Ritual respectively) and they are featured here in re-recorded and definitively improved version.
Righteous Ones closes the album. I liked the riff and the vocal line, but this song left me baffled as it ends quite abruptly so one second you’re headbanging along and the next the song is finished – which wouldn’t be odd if this wasn’t the final song!

Reflecting upon this album, my idea is that what Sealed in Starlight would need is moment of pause; something halfway thought the album maybe, so that one could stop, breathe, and start again. The lack of said moment, combined with the fact that the album is a slow descent from the height of the first song, result in something that is hard to pay constant attention to, but this album is not at all a record to be listened as a background; on the opposite, it needs your full attention and emotion. The problem is that said attention is gradually let go of, and there’s no time to rest then start paying attention again; the decline is almost inevitable (though not catastrophic), and the listening experience might even become exhausting.

At the end of the day, it’s hard for me to rate this album. Usually, even if there’s nothing new under the sun, I find the songs catchy or the riffs great, even if the sound is pretty standard. This time is kind of the other way around – the songs are, for the most part, fun to listen to but hard to remember, but the sound, oh the sound is totally on point. The muddy, greasy guitars are mixed to perfection and the voice shines above them, with a solid drum underneath.

Since this is only a start, and a nice one at that, I have faith in the guys and without a shadow of doubt, future albums will be better. As long as this wonderful sound remains!