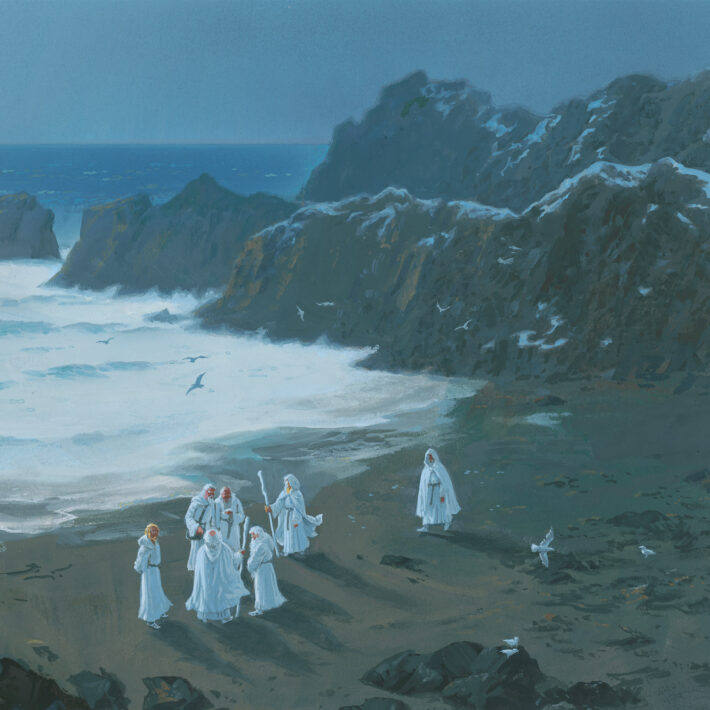 The differences between liking music and appreciating music are vast and varied. I can appreciate, say early Napalm Death records and the influence they had without actually liking them or enjoying to listen to them. On the other hand, I can like sections of Wagner’s ring cycle without having the slightest appreciation for what is actually happening in the music, or for its place in opera’s canon. Obviously when a good album comes along, I want to both like and appreciate the music as it deserves. And along comes Dawnwalker.

Ages is the fourth full-length release from the English band Dawnwalker. The album starts with a post-metal base, and then stretches that sound out, varies it in the manner of progressive metal, softens it in the manner of folk metal, and puts a layer of death metal on top of everything like a blanket on a cold night. This band takes their time exploring all of the nooks and crannies of those sounds, of which there are a lot. Although variety sits forefront when listening to Ages, the post-metal skeleton of Dawnwalker’s music always influences their sound.

Despite the impressive array of genres lined up throughout Ages, the album’s biggest strength lies in its emoting. The emotions in Ages feel raw in all of the best ways, regardless of which influence Dawnwalker is invoking the most in any particular moment. Both the subdued and grand moments feel honest in a way that a lot of music fails to capture. There is no substitute for that honesty, and it patches over a lot of other moments that would have been boring. Earnest feeling remains quite underrated in music compared to good hooks or technical prowess, and it refreshes me to see it leaned on here. The emotions can take the weight.

That does not mean that Ages only offers earnest emotions. Instead, the album sounds marvelous. The harsher moments ooze power that doesn’t feel possible given the soft foundation that they rest on. The riffs are quite interesting. The songs take forever to finish, but that doesn’t cause problems. The songs progress well and use the time to their advantage. Additionally, the production is great. Every song sounds full, the quiet moments sound great, the loud moments sound great.

So there you have it. Ages seems like a great album. The emotion is raw, honest, and engaging, the riffs and production live up to the album’s promise, and this is a progressive album that actually progresses. The only real downside to Ages is that I don’t actually like the music at all.

Ok, that statement may take some explaining after multiple paragraphs of glowing praise. First, despite all of the albums positives, I did not want to listen to this at all. Some albums, when reviewing, I grow tired of, and some I don’t. Ages was neither. Instead,I approached it begrudgingly after just the first listen. Sometimes that feeling goes away. With Ages it didn’t. Instead, while listening to it I felt resigned to my task. It still impressed me, the words in the first few paragraph of this review are all my honest thoughts, yet I still felt relieved when the task of listening to Ages was over. In between listens, the album melted from my brain, leaving no memories at all of the music other than my vague sense of discontentment.

Despite all of the impressive elements that Dawnwalker assembled here, Ages did not click with me at all. Don’t let that deter you if this sounds interesting. Ages will absolutely be the album of the year for some people. This album will do quite well with anyone into prog or post-metal, or with people who usually find themselves disagreeing with my tastes. I really wanted to like Ages, and I’m disappointed it didn’t fit with me. Maybe in a year I’ll come back to this album and it will fulfill its potential. For now, though, I appreciate what Dawnwalker did.