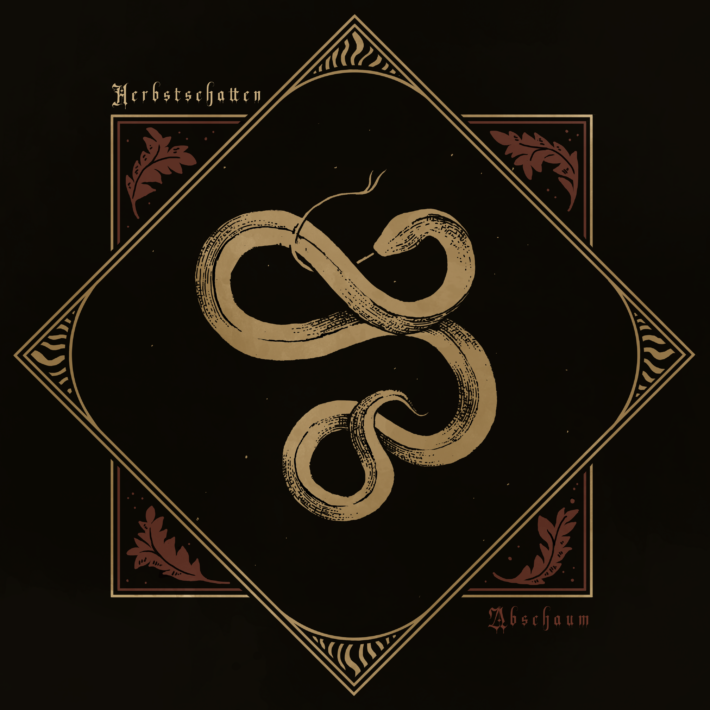 Sometimes, when looking for an album to listen to, I make my decision based on the band’s name. So was the case with Herbstschatten, which is German for ‘Autumn Shadow’. Of course, an interesting name doesn’t guarantee that the music itself is interesting as well, which is why I’m extra happy when it turns out to be so. Luckily, Herbstschatten’s music is just as intriguing as the name. Seven years after their successful debut, Liv og død, they release their sophomore full-length, Abschaum, this Friday, October 2nd. It’s especially narrative, as it’s based on the concept “Mensch als Abschaum”: man as scum. This focus on the story, both vocally as well as instrumentally, reminds of Carach Angren (especially their earlier albums).

The album starts with a three-minute intro. Spoken word, symphonic elements, and ominous guitar melodies set the mood for what’s to follow, as they slowly build up to the first full song, Seelenschrei. It starts with some raw guitar riffs, supported by drums that are inspired by the classic Norwegian black metal bands (though there’s more dynamics in the mix than in the 90’s). The guitar riffs are especially melodic, making the music somewhat accessible to people who might just be getting into the genre. Throughout the song, there’s numerous changes in rhythm, which is characteristic for the rest of the album as well. Vocally, there’s an interesting interplay between the main singer with his raw grunts, and a male choir that’s shouting, creating a sort of call-and-response between the two. Towards the end, there’s even a synth that backs up the music, giving the band a unique, modern sound.

Next up is Der Kutscher, one of the singles that was released already. Once again, the vocals are focussed on conveying the story, carefully articulating the lyrics (obviously, for those understanding German, the record will have an extra dimension). About halfway through the track, there’s an opera-like tenor voice, accompanied by a relatively slow drum rhythm and strings, giving the passage a dramatic feel. Following that, is a clean guitar passage with spoken word, building up to a chord progression that sounds almost euphoric, partly because of the female backing choir. This is a good example of the diversity in compositions that the band exhibits on their record.

In Flammen der Schuld, halfway through the record, there’s another clean interlude in which two guitars play an interesting ensemble, and are even accompanied by a flute. Soon after, the music builds up steadily into a melancholic song finale. The band fits a lot of sounds into the music; like synths and backing choirs, on top of the regular instruments, without overdoing it. This proves the band’s great musical insight. The second last track, Gabe, functions as an interlude with clean guitars and spoken word, leading into the album’s finale, Hingabe. Being just over ten minutes long, it’s the longest song on the record, and the band makes good use of its duration. After a compelling first passage, there’s brass instruments played over the foundation of drums and guitars, something we haven’t heard up to now. Herbstschatten alternates between introducing new motives and returning to the main theme, building up the song’s structure really well. Finally, the interplay between guitars, brass instruments and strings make it the bombastic finale this album deserves.

In short, Abschaum is a well-written black metal record, with a lot of intriguing symphonic and narrative elements. There’s a lot of diversity in playing styles, with which they keep the listener hooked until the very end. For anyone who likes a little melody and variety in their black metal, be sure to check this out.