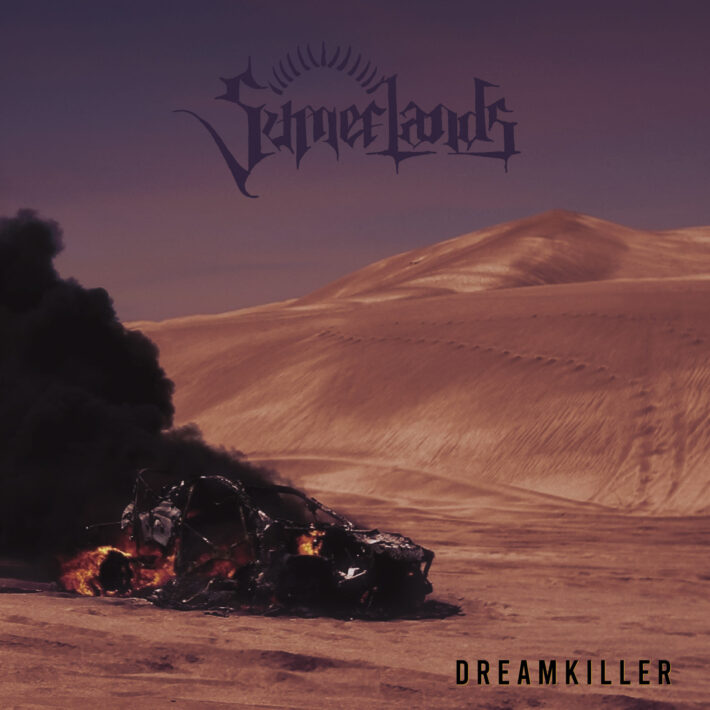 Sumerlands are a Philadelphia-based trad metal band who have great expectations to meet. Their 2016 self-titled release was excellent, and proved that this group has limitless potential. They also share multiple members with Eternal Champion, so this band is not a one-hit wonder. But past success doesn’t mean that their follow-up record, Dreamkiller, will be any good, and the six-year gap is plenty long enough for cobwebs to form.

Just like on their 2016 self-titled debut, Sumerlands start off Dreamkiller with the best riff on the album. The beginning of “Twilight Points The Way” begins this journey in a fantastic manner. The rest of the song lives up to the opening moments: The chorus is fantastic, the new vocals fit Sumerlands’ style, and the unholy levels of reverb present on this song flood my ears with nostalgic memories of giant arenas.  Add a guitar solo that combines fiery shredding with a rare sense of musicality, and you have one of my favorite songs of the year so far.

The drums on Dreamkiller sound crisp and aggressive. It’s easy for drums in these retro-style records to fade into the background or become nothing more than beat machines there to provide ambience, but drummer Justin DeTore provides life and emotion from the foundation of Dreamkiller.

Sumerlands’ new vocalist Brendan Radigan reminds me of Eternal Champion’s in that his tone sounds just a little too nasally. This is more of a preference than a problem, and it didn’t end up lessening my enjoyment of the record. He ends up sounding powerful and appropriately grandiose for the style of Sumerlands. Rounding out the group, Brad Raub’s bass sounds driven and provides a clear opposition to the guitars at points. Said guitars, played by John Powers and Arthur Rizk, are simply the best part of Dreamkiller. I don’t usually like the keyboards when they show up because the tone they use doesn’t fit what I want out of this style of band, but that’s not the end of the world.

What could have been the end of the world is some of the songwriting decisions on Dreamkiller. First, several moments feel like Sumerlands ended up being too clever for themselves. The prime example of this is the end of “Heavens Above.” The song starts slowing down, but instead of crashing into a big sleazy ending or concluding with a quiet interlude or something like that, the band instead just pauses for a moment, the vocals repeat the title, and then the song stumbles to the end. This ending comes off as odd.

Worse, Sumerlands has an awful songwriting habit of abandoning everything other than their focus. The first offender is “Night Ride,” a slower ballad that works fine as a filler track. For too long in Dreamkiller’s middle tracks, every aspect of the drums and guitars that I enjoy takes a breather while the focus shifts entirely to the vocals. Radigan is a good enough singer to carry the band, but what makes Sumerland great is that they have everything all at once. Powerful singing over great riffs over interesting bass lines over passionate drumming. Sometimes Sumerlands just choose not to do this.

Upon first listen this songwriting issue cratered the album for me, as it turned Sumerlands from an excellent heavy metal band to just another group with good foundations. After subsequent listens, the problem doesn’t last for as long as it first seemed to. Sometimes the riffs are still there, just buried. The drumming falls off a bit, but still contained plenty of fine moments. I just wish Sumerlands would do a better job of shifting the focus of their music without abandoning other aspects of their sound. The sustained downshift in tempo hurts a bit here as well. Sumerlands can play a good slow burner, but these tracks can drag at times.

Dreamkiller is not a perfect record, but the enjoyment I’ve had from listening to new Sumerlands material eclipses any songwriting irritations I have. Dreamkiller works. It works as a talent showcase, it works as a collection of massive riffs and choruses, and it works as a complete, focused, and cohesive album. Dreamkiller isn’t as good as the band’s self-titled record, but that’s an unreasonably high bar. I recommend this to any fan of trad or heavy metal that can tolerate music slower than Iron Maiden, and will eagerly await their next release in 2028.