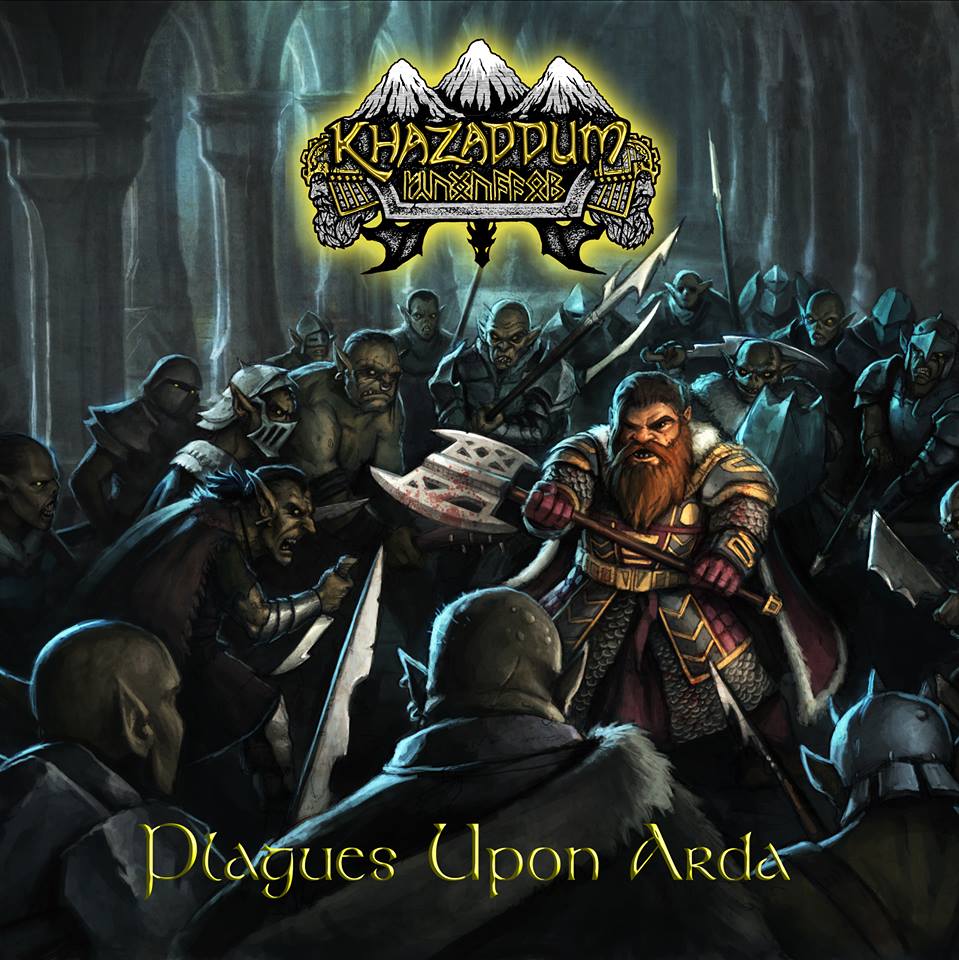 Beneath the splendid halls of Moria, the Dwarves delved too deep and unleashed an ancient evil upon the world.  In their lust for gold and jewels, they awoke fire and brimstone that culled their ranks like a white-hot scythe.  This unrelenting fury is meted out through the death metal band Khazaddum, whose name is a paean to the ancient lore of Middle Earth and the Undying Lands.  Khazaddum reenters the fray after having released an EP with their debut album Plagues Upon Arda.

Tolkien metal bands are few, for whatever reason – one would think that the expansive world of trolls, orcs, and dragons would inspire more than a few music projects.  It’s refreshing to see a band embracing this fantasy realm, but lyrics aside, does Plagues Upon Arda deliver?  Khazaddum plays unrelenting death metal in the form of metal greats such as Nile and Bolt Thrower.  While the fury and the passion is present in Plagues Upon Arda, the band fails to set itself far enough apart from the masses.

Orchestration slowly fades in to begin the album in the opener “The Halls of Khazad-Dum,” and it’s here that this tactic is most effective on the record.  “The Deathless Crown” is a furious assault on the ears, a mishmash of churning guitars and gurgling bellows.  There’s some unique fretwork two-thirds of the way through the song.  “Lords of Isengard” begins with orcish bellowing, but quickly lapses into a generic death metal tune.  The orchestration that accompanies the song is drowned out by the other instruments, a problem that is repeated throughout Plagues Upon Arda.

“Legion of the White Hand” steers the band back on track for a moment as the lead guitarist strums arpeggios.  The drumming is proficient on this song and the change in tempo mid-song is artfully executed.  “The Fell Rider’s Scourge” begins with a crunchy guitar riff that has the orcs of Mordor dancing atop the battlements of Barad-dûr with glee.  The bass guitar thumps along underneath like the pulsing footsteps of a cave troll.  Unfortunately, the orchestration that accompanies it is reedy and tentative.

The main riff in “The Black Hand of Gorthaur” sounds great until the listener realizes that it’s incredibly similar to the one that was previously presented in “The Deathless Crown.”   “Master of the Plains” boasts a few measures of innovative guitar soloing, but there isn’t much variation in vocal delivery or on the rhythmic end.

“Shelob the Great” is an homage to the great spider who built her lair at the base of Sauron’s mighty fortress, luring her prey into her dark webs.  The symphonic elements work well at the beginning of this track, and the relentless fury of the spider can be felt in the churning guitars and drums.  It’s almost as if she has been awakened from her slumber to pursue a fleeing quarry.  The album finisher, “Oathbreaker’s Curse,” begins with atmospheric riffing that helps set the tone of the song.  It’s a relaxing of pace that works well.  “Oathbreaker’s Curse” is a confident clincher that helps buoy an otherwise mediocre album.

It’s tempting to elevate this album on a pedestal simply because of the Tolkien elements, but that would be an egregious error.  There is promise shown on Plagues Upon Arda, but it is overshadowed by repetition, poor mixing, and lack of atmosphere.  There isn’t enough variation to set apart Plagues Upon Arda apart from the crowd.  Khazaddum, while talented, plays it a bit too safe on their debut record.  Still, Plagues Upon Arda is an album that deserves a spin or two from death metal and Tolkien fans.

Tracklist:
1. The Halls of Khazad-Dum
2. The Deathless Crown
3. Lord of Isengard
4. Legion of the White Hand
5. The Fell Rider’s Scourge
6. The Black Hand of Gorthaur
7. Masters of the Plains
8. Shelob the Great
9. Oathbreaker’s Curse