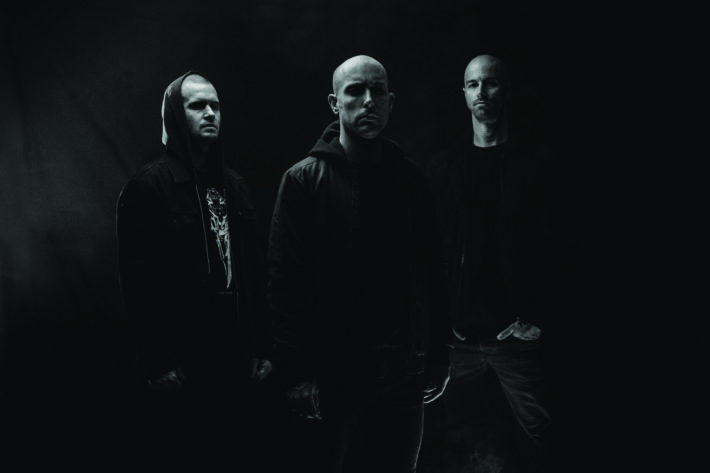 New Zeland’s death metal masters Ulcerate released their latest album, “Stare Into Death And Be Still” about two weeks ago, but you probably already know that, since everyone has been talking about it; rightfully so, since it’s set to be one of best metal releases of the year. After our review, here´s our Q&A with Ulcerate.

“Stare Into Death And Be Still” has been out for a few days, receiving nothing but praise; were you expecting such a good response?

I think we knew the record was strong, but the response is far beyond what we ever anticipated. Overwhelming if I’m being honest, as there’s always a sense of trepidation releasing new music to the world – particularly when only a handful of an inner circle have heard it.

As it was also stated on your official Facebook page, the album was leaked before its official release. Were you bothered by it? How disrupting that is for a band, especially in an age where streaming is the most popular way to listen to music?

Not bothered at all from our side. At this point albums leaking is an inevitability. The album had already been released as an exclusive stream, so it is neither here nor there in terms of people hearing the album. In principle though, it’s a fucking low thing to do when it comes to underground music.

Your musical style is highly technical and precise, filled with dissonances and odd time signatures; that produces very unique sounds. How do you balance technique and atmosphere? Does the complexity make the composing process harder?

Our composition process is completely instinctual. The complexity, or lack thereof at times is purely by proxy of us developing skills over the last 25 years through methodical practise regimes. So developing enough of a skill-set so that you’re much freer when it comes to composition. Hasn’t always been the case, our early material was definitely an example of writing material that was slightly above our collective abilities, but over time the motor skills have caught up. I’d say for us the hardest part of the process is arrangements, making everything mesh together fluidly with a sense of
direction and narrative.

In “Stare Into Death And Be Still”, the lyrics go hand-in-hand with the music, creating a particular atmosphere. What do you think is the relationship that bounds music and lyrics? What comes first when writing a song?

Music always comes first, but lyrics and vocal arrangements provide an unmatched ‘glue’ that suspends momentum throughout a song. A strong vocal performance adds a layer of humanity that is missing from instrumentation alone, even when we’re dealing with harsh, non-melodic vocals. And lyrics have to serve the music intrinsically, which then develop into enunciation and an attitude of delivery. With this album in particular
we agonised over the small enunciation and phrasing details to get the right attitude at all times – there’s a level of vitriol that needs to be conveyed with our material and the slightest adjustments can really make or break parts.

Grief, alienation, anxiety yet hopelessness; those were all emotions felt by myself while listening to the record. What is the message that you wish to convey through the music? What inspired you in the making of the album?

I think it’s over analyzing things to read into some sort of overarching ‘message’.
Ultimately this is the sonic space we’ve found ourselves in, it’s still intoxicating to compose albums like this, and nothing adrenalises me more still to this day than great death and black metal. But some of the most negative music, cinema and art can have a very deep and profound effect on your psyche – it touches an untapped part of your being that is elusive and compelling. I find a lot of art / music that explores ‘happiness’ to be incredibly shallow – I think conflating the emotion of happiness with ‘happy’ art or music is just not reality. And it’s these kinds of feelings that propel us forward in making albums like these.

This album was released during an unusual, to say the least, period of time, but this album sounds like an appropriate soundtrack.
Having written lyrics reflecting on such somber themes similar to the ones we are dealing everyday with, has your attitude towards death, and other themes changed now? Or did you feel more “emotionally prepared” – even if of course no one was expecting a situation like this?

The album releasing at this time is a complete coincidence though. And while it’s perhaps seemingly apt, we’re coming from a completely different place thematically. As I said before, indulging in dark thematics doesn’t necessarily affect your psyche, it’s incredibly easy to compartmentalise. We take our music deadly seriously, but it doesn’t infiltrate day to day life per se.

I usually end my interviews asking the artists about future projects and tours, but this isn’t really the right time for that, so… how is your lockdown going? Have you thought about livestreams? Or are you straight-up focusing on writing and playing music?

No we’re planning tours – we’ve rescheduled our Australasian dates for later in the year, cancelled all North American dates we had planned for November, and are currently looking to Europe early 2021. And a livestream will never happen, absolutely not of any interest to us.

I’m very grateful to the guys from Ulcerate for this interview, and I wish them good luck for their tours next year. Here at MetalUtopia we all loved “Stare Into Death And Be Still”, so much that it was twice nominated in our April’s “Album of the Month” article .
Follow the band on Facebook, and visit its Bandcamp’s page and its official website.