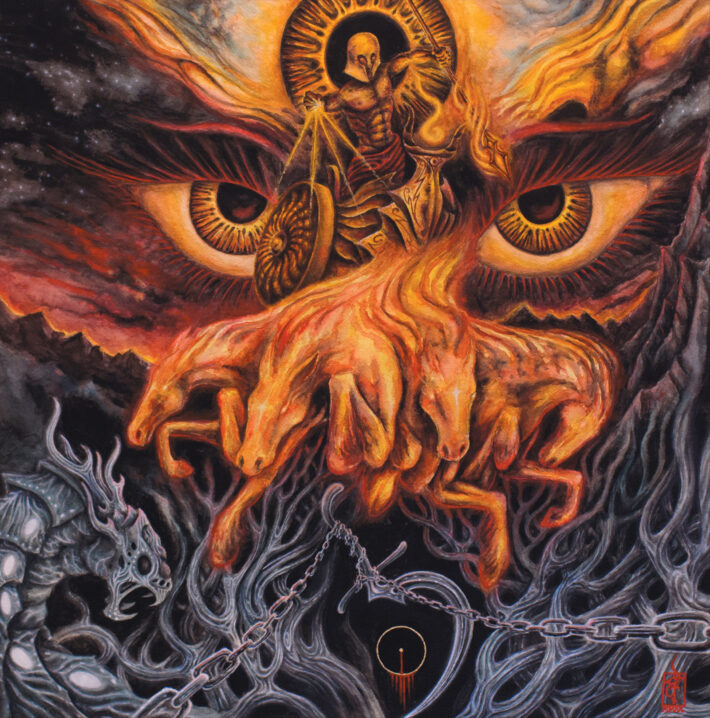 Long-time fans of ambient black metal act Midnight Odyssey may have some worries about its newest release. Although this is the second part of a trilogy of records, sole member Dis Pater has stated that his big influences this time around include epic doom metal bands like Scald and Solstice, as well as the viking metal of Bathory. This is something of a shift from the band’s typical sound, including from the first album of this trilogy. Apparently The Golden Orb “is about feeling the ultimate wrath of the sun god, and ultimately the complete insignificance of human existence in the entire terms of universe, galaxy, space and time. We are at the mercy of the sun, life-giver and life-taker.” If anyone can pull that concept off while at the same time drastically changing their style in the middle of a series of concept albums and maintain their intensity over almost two hours, it needs to be Midnight Odyssey.

The Golden Orb starts with a stunning sunrise. Opening track “Dawn-Bringer” immediately dismisses any concern that fans may have had about the stylistic shift to epic doom that the promotional material foretold. This twenty-minute epic contains plenty of highs, maintains interest through its entire length, and most importantly, has memorable and amazing riffs. The subdued sections of the track burn away the gathered emotional residue and allows the epic doom influence to come charging back in. “Dawn-Bringer” also reveals Midnight Odyssey’s approach to the album in more detail. Although the epic doom influence immediately rises to take its prominent place, this doesn’t block the light from reaching the other elements of the music. This is still Midnight Odyssey. Synth heavy ambient black metal remains the foundation of the album.

Of course, The Golden Orb isn’t done after “Dawn-Bringer.” That twenty minutes passes briefly compared to the size of the album. And the rest of the release sometimes feels less like a blazing beacon in the sky, and more like a solar eclipse: Unavoidable and potentially painful. “Aurora Burning” is over five minutes of nothing impactful and didn’t need to be on the album. “The Unconquered Star” and “The Saffron Flame,” although not bad tracks, could have been half of their length and nothing would have been lost. Midnight Odyssey has always been a band of excesses, and if you know them, that is why you either adore them or find them boring. Their recent musical shift does nothing to change this. The entire, almost 2-hour runtime of this monster is emotionally and acoustically all-in. Because the album is so charged, by the time the final tracks come around I have no capacity to engage with the music anymore. Instead of praising the earnest and fanatic temerity of The Golden Orb, I’m relieved I can finally move onto something else. It’s a shame, the closing track provides an excellent and calm release from the experience.

Yet, after I move onto something else, The Golden Orb stays with me. Midnight Odyssey don’t just cross the line into the absurd, they go so far beyond the line that it gets lost past the horizon as The Golden Orb soars through the sky. No one else could have made this record. No where else will you experience this record. Even when I’m an hour deep into this record with no end in sight, going through ambient passages that have long since sputtered out and stopped accomplishing their original purpose, my respect for this record doesn’t go down. You listen to Midnight Odyssey on its creator’s terms and absolutely nowhere else. If you do find the music, though, you find as much heart and soul as anywhere. The Golden Orb feels like it gets dragged down and collapses under its own weight for over half of its run-time, but it never stops fighting to ascend again.

Listening to The Golden Orb feels a lot like watching Cirque du Soleil, only if the circus act replaced half of their performers with bears that juggled flaming sticks and burned down the venue before the act was over. Not all good, but definitely spectacular. If you liked Midnight Odyssey’s previous works, the added epic doom metal influence will only make them reach new heights. If you found them to be a little too much, they will now be a lot too much. If you haven’t heard them before, let this music shine on you. Even if you don’t like it, it will be one hell of an experience.