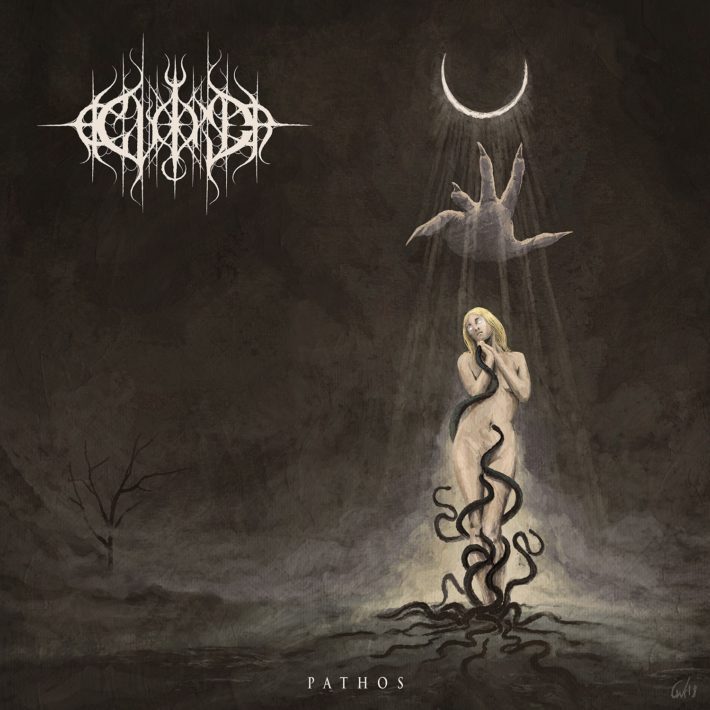 Innovation is overrated. In the search for new sounds, musicians can forsake what made them passionate in the first place and create worse sounds than they otherwise would. However, musical innovation does provide a simple way for one’s sound to stand out from the crowd; there are dozens of albums being released each week, and being unique can be the difference between an album sticking in the listener’s mind for years and an otherwise competent band being forgotten by the time the next album has arrived. And that’s where Canadian blackened death metallers Eclipser fight their battle on their debut album Pathos.

According to the promotional material, Eclipser “spews forth a foreboding polarity of soaring melodies and nightmarish dissonance, coiled together to create a dreadful malaise of blackened death metal promised to starve the light of everything it touches.” I am thankful that this was mentioned in words, because otherwise I would have had no idea that this was the musical intent behind the album. They claim an “emotionally disturbing sonic landscape,” but the only atmosphere present is one of comfort, bordering on safety. Sure, in comparison to, say, Rod Stewart, this is a dissonant and dark work, but compared to the last twenty years of black metal there’s nothing particularly disturbing about this at all. It actually feels catchy, by the numbers, and familiar.

Although the music on Pathos isn’t particularly unique, and the atmosphere presented is nothing special at best, that’s not to say that there is nothing to like here. The songwriting in particular is top-notch. The riffs are all interesting, and the songs all feel like they last exactly the right length: They end when the musical ideas expressed are done, but they never overstay their welcome. The first track, “On Mournful Waves Of Eternal Dusk,” threatens to become boring and repetitive at times, but just as that line is about to be crossed Eclipser switches up the sound and finds a different motif to work with. The band’s ability to run right to the cliff of boredom without ever falling over is very, very impressive, especially for a debut album. This requires lots of compositional talent to pull off, but it also requires confidence. This band oozes confidence from top to bottom.

This confidence is most apparently expresses in the vocals of Francesco Falsetto and Ryan Menard. These set the tone for the album. Loud, bold, and aggressive rasps can be heard on every song, with no real moments of weakness or hesitation. It can hard to convey emotion through distorted screaming, but they manage beautifully and fill out the sound of the songs in a way that would be absent if this album was in the hands of a lesser band.

It can also be hard to convey emotion through sub-optimal production, and unfortunately this is not managed well. The entire album is slightly muddy. This is not actually the problem; after all, this is a black metal album. Lo-fi sounds are a part of the genre’s history, and can be extremely helpful in creating the atmosphere that one wants (not that this was successful, but still). The muddiness is also normalized halfway through the first song and isn’t truly noticeable after that point. However, there is a specific problem with the mastering that is jarring and takes the listener out of the music: The instruments don’t always mesh well together. Occasionally when the guitars enter the sound is so jarring that it splits the songs in two and removes me from the listening experience. This would be fine if it was intentional, but it doesn’t sound like it is.

Lyrically, Pathos can hold its own. There are biblical references, quotes from Dante, and black metal tropes throughout. Yes, some of this is just what you expect from a black metal album. No one will be surprised or impressed by people dying or references to satan and gods in this context. However, the album as a whole feels very cohesive. There is a sense of searching for god and for the erasure of sin and pain throughout the album. This doesn’t seem to be a concept album, but there are definitely threads from song to song. Although the topics presented may not be unique, this is a band that has something to say, and if you are at all interested I highly urge you to look up the lyrics while you are listening to Pathos. You will not be disappointed.

On Pathos, Eclipser doesn’t do a whole lot wrong. However, they also don’t do a whole lot that hasn’t been done better by a lot of other bands. If you are a huge black metal or blackened death metal fan, check these guys out. There is a lot to love with this album. But if you usually lean away from black metal, this will do nothing to entice you or make you feel any differently than normal. You probably already know what the album sounds like, for better and for worse. I mostly enjoyed listening to Pathos while writing this review. But in a year? I can’t promise I’ll remember that this album even existed. Maybe that’s too high of a bar to set, but Eclipser definitely has the talent to meet it.