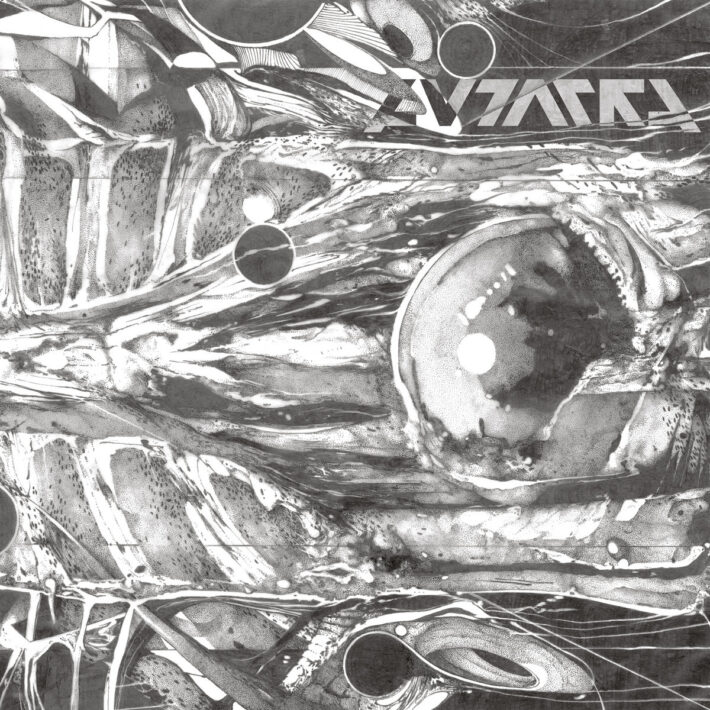 Many people who listen to extreme metal will have heard of the band Dodecahedron. With two impressive albums, from 2011 and 2017 respectively, they’ve become a household name in the scene. Michel Nienhuis, founding member and composer of Dodecahedron, felt the band had to evolve into something new, in order to progress. Thus arose Autarkh, which can be considered an evolution in both sound and lyrical content from Dodecahedron. Autarkh is labeled as contemporary extreme metal, which is actually a really fitting term. What stands out immediately is the fact that there’s no drummer in the band. All drums are synthesized. With drum beats that are inspired by IDM, in combination with synthesized soundscapes and glitch effects, Autarkh has elaborated a modern and innovative sound. This Friday, they release their debut record, called Form In Motion.

The album starts off with Primitive Constructs, a menacing intro that lifts a corner of the veil of the full record. It perfectly builds up to Turbulence, which is the first single that the band released. With blast beats, raw and dissonant guitars, and a powerful scream, Autarkh immediately captivates you with their enthralling music. The beat consists of a great number of sounds, surrounding you in such a way that you feel like you’re inside a machine. Rhythm is an important aspect of Autarkh’s music, for also the lyrics are delivered very rhythmically. The buildup to the chorus works as a compelling breakdown, and when the chorus comes in, you won’t be able to sit still. What’s interesting is that the vocals actually aren’t grunts anymore: they have a unique melodic, yet raw sound. Near the end of the song, the music becomes even more intense and at one moment the drums actually seem to be glitching, an intriguing effect that’s used on various occasions throughout the album.

Turbulence seamlessly flows into the next track, Cyclic Terror. There’s complex rhythms, both in the percussion as well as in the dissonant guitar riffs. The vocals once again prove to be very versatile: there’s high-pitched, agonized grunts, deep menacing growls, and even haunting whispers. As complex as the rhythms may be in the verse, there’s still a relatively clear base rhythm in the chorus, giving you something to hold onto in the overwhelming amount of layers that make up the full instrumentation.

Just like on Dodecahedron’s albums, there’s interludes that appear every few tracks. Apart from giving the listener some auditory relaxation, they can also be seen as steps in the progression of the record. Impasse is almost completely percussive, really showcasing the depth in the synthesis of the drums, and even evoking a slight feeling of paranoia or distress. After the next two songs, that are as intense and impressive as the ones that preceded them, there’s another interlude, Metacognition. As opposed to Impasse, however, this interlude completely consists of ambient sounds. It’s easier on the ears, but still holds on to the unsettling atmosphere of the record.

Next, it’s time for Clouded Aura. The melody on this song is more prominent than on some of the others, having the motif of the chorus shine through in the other parts of the track as well. The melodic vocals can even be sung along to. About halfway, there’s a quiet interlude with the main theme and some soft rhythmic effects, after which the tension is built up gradually until the full instrumentation is back and plays explosively in the second half of the track. Alignment works really well as the last full track. About halfway through, the two main chords are repeated over and over again, evoking the feeling that you’re stuck in a kind of vicious circle. However, the synthesized effects and dissonant riffs slowly let the song disintegrate into the outro, Zeit Ist Nur Eine Illusion (Time Is But An Illusion). It sounds like the album ends in a sonic error, but finally it resolves into an ambient soundscape, revealing a shimmer of hope, and thus ending on a positive note.

In conclusion, with Form In Motion, Autarkh have successfully pushed the boundaries of extreme metal conventions. By integrating synthesized percussion, they’ve created a sound that is as modern as it is unique. The vocals are exceptionally versatile, and their [distressful] melodies stay in your head even after you finished the album. Especially in the guitars and in the general atmosphere of the record, you can hear it has evolved from Dodecahedron, while still having created su propio identidad.