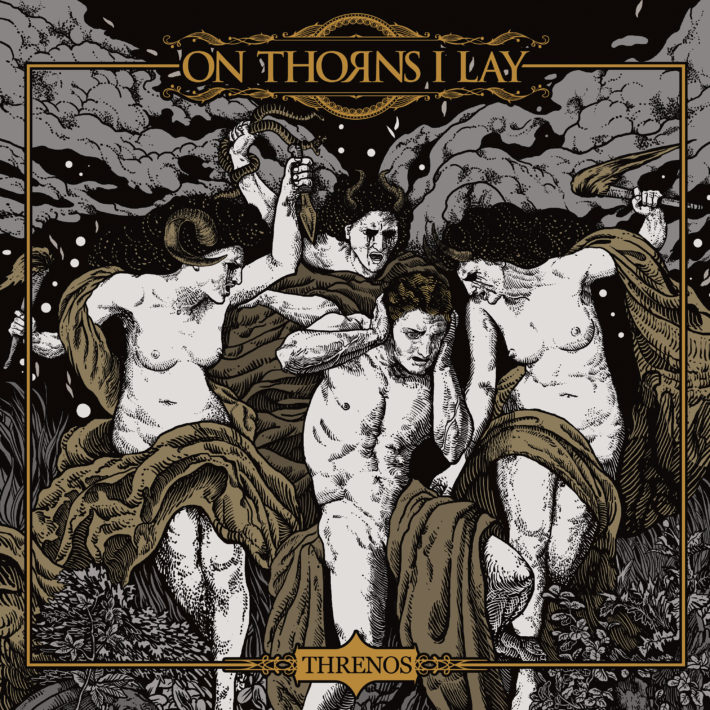 Everyone is a sucker for something. It might be cheesy horror movies, it might be bad chinese food, it might be voting for terrible politicians because of an ad on a youtube video. This goes for you and everyone you know. I’m currently a sucker for good death/doom. Enter On Thorns I Lay, with their new album Threnos. This hit a sweet spot for me, which could mean that it’s a good album, but it could also just mean that I was in the right place to listen to Threnos and would have enjoyed it no matter how boring it actually was.

Threnos is the ninth studio album by the Greek doomers On Thorns I Lay. It leans into death/doom traditions, and features mostly growling vocals that stretch on top of slow, somewhat orchestral undercurrents. Nothing ever moves fast or too slow, and although the death metal influence is clear in the music, Threnos is definitely closer to the doom edge of the genre.

There is a full sound on Threnos, and the band dwells in it well. On Thorns I Lay make it obvious that they are veterans through their unhurried songwriting that fits the mood perfectly. Slower, doomy tempos allow the lush music to fill the room without too many notes or overplayed passages. Instead, everything is more subdued, nothing is ever really drowned out or forgotten, and everything across the album’s entire spectrum hits effectively. On Thorns I Lay successfully convey a sense of resigned sorrow that stays for the entire experience, as every note sinks in for long enough to really let the clarity or the clashes of the moment ring.

There is a logical, natural progression to the sounds on Threnos. Again, On Thorns I Lay prove that they know what they’re doing when it comes to doom metal. Very little about Threnos will surprise any listener, but what is there seems to be exactly what the music needs in a given moment. The riffs, the orchestration, the choruses, everything is in its proper place. Everything feels organic, as if the music has existed for years. This is the sound of an old band, that knows exactly what they can play and is doing what they’re good at rather than trying to push their boundaries. This mostly works. Everything feels worn out and familiar, which isn’t the worst for a morose doom metal album.

This organic, natural feeling works against Threnos almost as much as it helps at times. The music has a high floor, propped up partially by the excellent song writing of the band,  but the flip side to that is this album’s low ceiling. Threnos always felt nice or contemplative, but never great. It is surely competently crafted death/doom, but it is just as surely nothing more. Nothing stands out beyond a general sense of pleasantness, which is not entirely enough to carry an album.

Threnos goes on too long. Compared to other doom metal albums, this is a relatively brief release, but there isn’t enough to justify what’s there. Any three songs could be cut from Threnos and it wouldn’t affect my enjoyment of the project at all. Each individual song works well, but every song sounds similar enough that none of them actually add anything to the overall progression. This thing might as well have been one giant song and it would be exactly the same.

Threnos is not a bad album. On Thorns I Lay should be proud of their effort. Unfortunately, they didn’t do enough to elevate Threnos to the level of excellence, but there is a lot to enjoy here. The sound is full, the riffs are good, the atmosphere is precise. I suspect that I enjoyed this a lot more than others will due to my propensity for the genre at this moment of time, but if you’re looking for good death/doom, this will soothe you for a while.

Click here to visit On Thorns I Lay’s Bandcamp