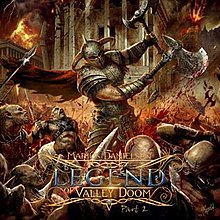 With Ayreon and Avantasia dominating the scene in the “multiple-singers-and-epic-conceptual-music” realm, it can be tough to try and compete with that. With so many factors to juggle, whether that’s balancing all the singers and their characters or trying to write good music that will fit, it’s amazing to see another to attempt such a challenge. Marius Danielsen clearly has not shied away, as he offers his second album in the same vein.

Legend of Valley Doom Part 2 picks up where Part 1 left off in the story. In typical power metal fashion, this is very much a classic fantasy story where the dark lord conquers the hero’s home, hero then begins a quest to vanquish said dark lord. It’s as cheesy as it sounds, but it is not the cheesiness that stands out on this record; rather it’s the music that is written so well.

Part 2 overshadows Part 1 with its much improved music and songwriting. My issue with Part 1 was the overabundance of over-the-top, climax-driven songs that numbed any emotion they were going for. That, and the album never seemed to flow from track to track. Danielsen seemed to take all those criticisms and used them to write a much better record. Right off the bat, after the heart-pounding “Rise of The Dark Empire,” it flows effortlessly into “Gates of Eunomia.” It’s transitions like these, from a fast and driving song to calm and gentle ballad, that show the maturity of songwriting and structure. The ballads that are on this record (yes, there are multiple) never interrupt the pace of the record and help move it along.

“Gates of Eunomia” leads directly into another ballad, “Tower of Knowledge”, but it feels distinctly different from the previous one and doesn’t drag on. Despite the incredibly cheesiness of the lyrics, the music reflects the melancholic nature of this point in the story. There are a few moments like this on the album that convey emotions incredibly well, giving this fantasy world a sense of reality. Later on the album, “Angel of Light” offers a feeling of hope but the music underneath describes the weight that these heroes have felt with all of the challenges. It’s an incredible ability not many have; to match the music with the arc of the story and not make it feel forced.

Of the wonderful musicianship on this record, the guitars really stick out. Every guitar solo is tasteful and just right, particularly in “Visions of the Light.” Not only are the solos great, the musicianship required to know whether to hold back and let other voices come through or take the lead is outstanding. “By The Dragon’s Breath”, after the intro, starts with a driving lead guitar, but it pulls back without you noticing to let the symphonic elements and singers take over. Not to mention the solos that are equally flashy and impactful.

Of all the tracks on this record, “Crystal Mountains” is one of the few that shines above the others. Sprawling over seven minutes, this track is one of the longest and also one of the heaviest. Opening with a delightfully haunting choir, it smoothly slides into a hard-hitting riff that carries a sense of doom with it. “Listen to the SILENCE” adds to the unease of the journey every time it’s belted out and reminds the listener that they are in fact walking into a mountain with unknown terrors. With its different sections, the song seems to fly by and seven minutes feels impossibly short.

In case it wasn’t obvious, I really enjoyed this album. After listening to Part 1, I was a little nervous going into this one, but I was blown away. There is a wonderful balance of ballads and epics, all connected together in a fun story. One of my only complaints with this record was that it felt a bit too long. Eight out of the twelve tracks are over six minutes long, and while they are all great material, it does make for a marathon of a listen. That being said, this is still a wonderful release for the world of power metal. Corny lyrics, blazing fast drums, symphonic elements, and over-the-top epicness, this album will not disappoint.

Tracklist:
1. King Thorgan’s Hymn
2. Rise of The Dark Empire
3. Gates of Eunomia
4. Tower of Knowledge
5. Visions of The Night
6. Crystal Mountains
7. By The Dragon’s Breath
8. Under The Silver Moon
9. Angel of Light
10. Princess Lariana’s Forest
11. Temple of The Ancient God
12. We Stand Together