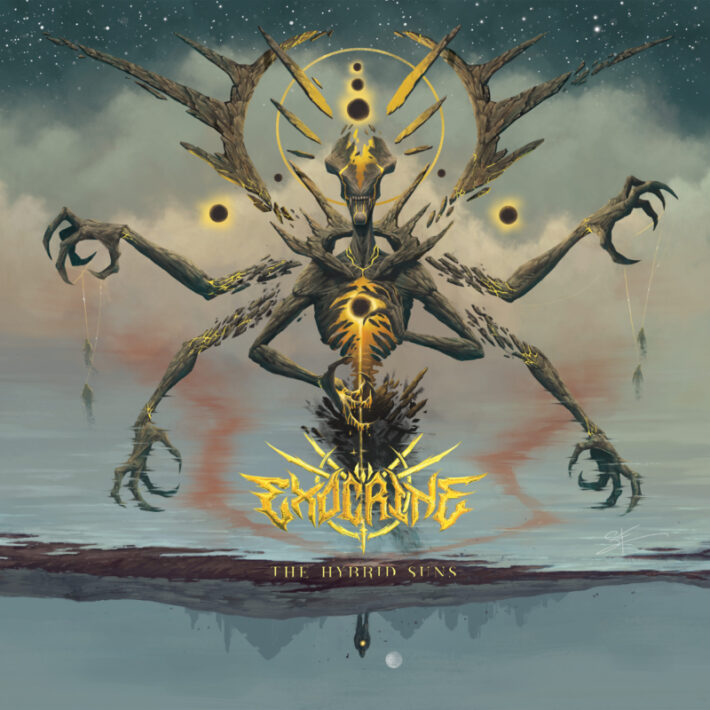 Exocrine is a French technical death metal band that was founded in 2013. It is the brainchild of guitarist Sylvain Octor-Perez, who writes all the music and even produced their most recent record. Over the course of the years, the band has been defining their sound – releasing an album every two years or so, five up to now – and their reputation has been growing steadily. Last Sunday, June 19th, they even played at Hellfest, which shows that they’ve built up quite a name for themselves.

Their latest record, The Hybrid Suns, was released last Friday, June 17th via Unique Leader Records. It’s a concept album studying the voyage between life and death, and it’s as energetic as it is technical. They’ve really taken a step further in their musical development, compared to their previous records, having the electronic aspect of their music (i.e. synthesizers and electronic percussion) play a more important role than earlier in their discography. These electronic elements give the album a modern sound, and they’ve given Octor-Perez a lot of possibilities in terms of composition: the mere presence of the synthesizers add a whole new layer to the band’s sound, and their sound design is something the band has been able to experiment with as well.

Exocrine doesn’t give the listener any time to ease into the music. Instead, the record’s opening track starts off explosively with a full foundation laid by the drums, (bass) guitars and synthesizers, over which the lead guitarist is sweep picking. This way, the listener’s attention is immediately caught and the tone is set for the rest of the record. After a short while, the vocals join in and the guitars start to play more headbangable riffs. There’s a lot of different elements to process, which is exactly what the average tech death fan is looking for. However, even those who aren’t accustomed to the genre’s sound can easily follow the main riffs and melodies upon hearing the record for the first time.

The music is extremely diverse, no eight measures are alike. Blast beats and guitar shredding get alternated by more djent-like passages with a focus on the rhythm, but whatever happens, Exocrine doesn’t lose track of the flow of the music. When the chorus starts, something new is introduced in the sound of the band: a backing choir. This adds more depth to the music, gives it an epic sound, and adds a melodic touch to the vocals. It’s not like the vocals would be monotonous without the backing choir, though. There’s different types of vocals – from guttural grunts to pig squeals and everything in between – which alternate each other, but also appear at the same time, creating intriguing layered vocals.

Although the majority of the analysis in the previous two paragraphs is about the first track of the record, the same applies to the other tracks of the record. This doesn’t mean every track is the same, on the contrary, each track has refreshing riffs, drum patterns, vocals, and other elements. The one (small) point of criticism is that many tracks have the same structure – a short intro, after which the music reaches full energy, and at about two thirds an interlude with a guitar solo – but the way this structure is worked out differs so much from track to track, that the music stays refreshing over the course of the record.

In conclusion, The Hybrid Suns is an impressive record with a myriad of different sounds, rhythms, and melodies. It’s easy to follow upon a first listen, but it’s so full of different elements to discover, that you can put it on time after time. The synthesizers and backing choir show that the band have taken a step further in their musical development, and give the album extra depth. It’s definitely recommended to check out this record, as well as to keep an eye on their future work, because if they keep evolving like they’ve done so far, they’re bound to blow us away again.