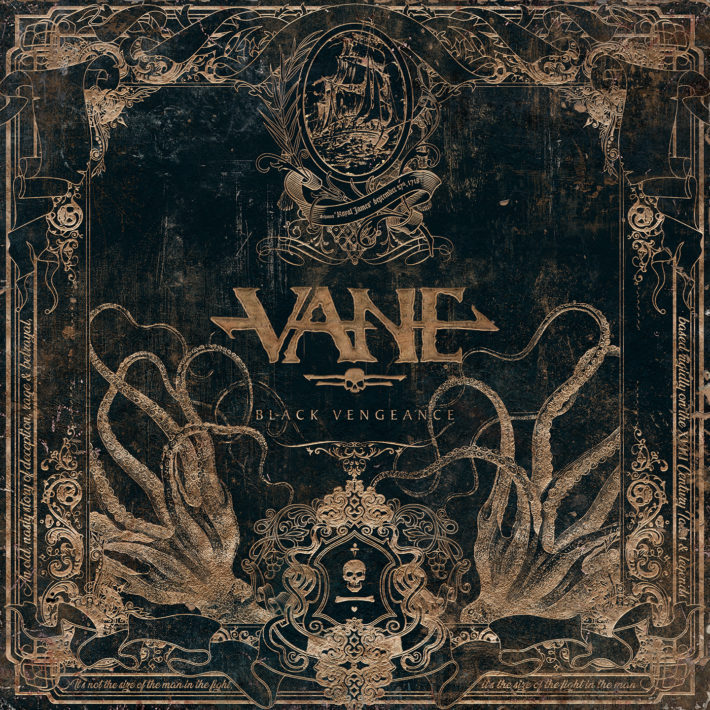 When you hear the phrase “Pirate Metal” you probably think of the gimmicky power metal outfits with drunken chants as choruses between folky, Aeolian melody breaks. It’s a novel approach to thematic metal, but it’s effective in its own shallow way. Partially expecting a similar design from Vane’s upcoming debut album, Black Vengeance, I was surprised to hear a singularly honest expression.

The band bills their new release as melodic death metal, and I have to say it’s really not all that melodic, apart from a few passages scattered throughout the record. But it is extremely heavy. The key to Vane’s serious result, despite being pirate themed, was keeping the inanity out of the music itself. The lyrics deal with piracy and the hanging of scurvy seafaring criminals and the like, and there are occasional intros and interludes with theatrical soundscapes and dramatic spoken words sections (these are, however, brief, and surprisingly compelling) but Vane has managed to avoid the pitfall of campiness.

The compositions rely far more on metal’s existing, inherent strengths than the gimmick of buccaneer’s themes, and it avoids some of melodic death metal’s occasional weaknesses as well. A genre that has birthed so many speedy, furious classics can quickly become bogged down by midtempo grinding and excessive, featureless synthesizers. Black Vengeance keeps to what works: fast, heavy riffs. They continuously play with huge and blistering energy.

And while the heaviness and intensity are there, the melodic elements are lacking. There are a handful of guitar solos, and they’re good, but not engrossing. There are dozens of satisfying riffs, but the melodies don’t come out much. Most of the musical ideas stay in the realm of dissonant tonality, where melodiousness usually draws from diatonic natural and harmonic minor arrangements. Vane uses harmonic minor and the Phrygian mode to sinister effect regularly but only in sporadic cases do true, harmonically complete melodies emerge. Part of this is because the guitar sections stay in the lower register and lead parts, besides the infrequent solos, are rarely added. This causes the “death” half of the melodic death metal sound to be the dominating force in the album, although the arrangements are very musically clear in a way that melodic metal usually is and death sometimes isn’t.

Marcin Parandyk’s vocals are excellent. He performs in an uncommon style, using very present harsh vocals that echo with depth and force. At times (best done in the opening track, “Born Again”) he uses pitched screams that roar with life and electricity, and it’s more effective than in the few cases where he leans into tonal singing, though it’s always awash with coarseness.

The real star of the record, though, is the production. The album hums with a beautiful fullness. The drums, bass, and guitar thundering in unison create a powerful heaviness that is as much felt as it is heard. The frequency and instrument balance is near perfect, and there is an enveloping sense of depth and space, with every section sounding as close or distant as it best should. It all sounds huge and alive.

As a whole, Black Vengeance rather confidently steamrolls from one track to the next, and it goes by quickly. The songs are rhythmically simple but cleverly varied. There is just enough dynamic depth to both diversify and unify the whole experience. Calm, clean sections support the lighting storms of aggression in the right places, and in some of the tracks, notably “Rise to Power,” the album’s most outstanding song, several elements of heaviness, melody, and style all come together. In a lot of ways it’s a very simple melodeath album, but it shows no symptoms of lethargy. In fact, it’s one of the better melodic death releases in the last few months.