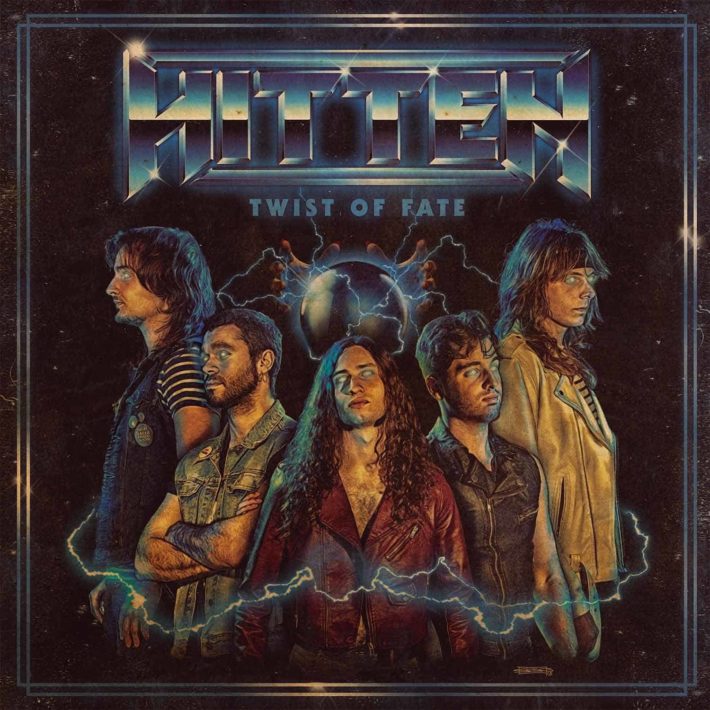 I did two spit takes while listening to Twist Of Fate, the new album by Spanish band Hitten: the first was when I realized, to the sound of wailing guitars, that 1980 was almost forty years ago, and the second was when I heard an actual harmonic sequence in the album’s title track. It was a clear sign that this was going to be more than just another would-be classic metal homage project.

Twist Of Fate is definitely a nostalgia record. To see that, it doesn’t take more than a glance at the cover art, which surges with lighting-blasted chrome and print-faded portraits of the band wearing sleeveless denim and leather jackets. But the music, especially, reaches a new level of period-revival authenticity. Guitarist Dani Meseguer credits classic 80’s heavy metal and speed bands like Saxon, Accept, and Judas Priest for the decisive influence of Hitten’s sound, and it’s all unabashedly there, but there are elements of glam metal as well, and it’s reminiscent of everything lovable about acts like Ratt and Scorpions. There are a lot of corners and branches of 80’s metal to draw from, and in its sincerity and passion, Twist Of Fate doesn’t sound like an imitation of any one band; it sounds like all of them.

However, there is a lot about the record that is unique and outstanding. 80’s heavy and glam metal inspired a generation of melodic, progressive, and power metal, and these artists pushed the music to be even faster, heavier, and more technical than it had ever been. Twist Of Fate’s songs have shades of these advancements—in a way, it’s a revisionist album. All the shine and attitude of classic heavy metal but with the sleek and powerful techniques of a more modern era, like a Porsche 944 retrofitted with the engine of a Bugatti Chiron. Because of this, Twist becomes something genuinely fresh, when normally, a record that leans so heavily into its influences would be overly novel and uninteresting, or unoriginal. It has an added depth.

Apart from this, it can be hard to pinpoint exactly why Twist Of Fate is effective, but the foundation of its success is simple: it’s just really, really good. It’s not glam, but it may be better than several of the original glam metal records, though I might get set on fire in front of an L.A. strip club for saying so. The album is well crafted and stays strong throughout its runtime. And it’s all played with the same intensity and energy that made heavy metal special in its adolescence, when it was performed by cocaine-obsessed hedonists who were also, miraculously, wild and untamed virtuoso musicians.

Hitten uses a lot of natural minor harmony in their songwriting. It’s a sound that can often foray into the territory of “cliché,” but the band plays through it with a lot of charm and sentimentality. Even the structures are a pleasant surprise—choruses and verses can be well anticipated, but the band will often interrupt them with a crafty key or tempo change, break into a new riff, or transition smoothly into an extended, energetic shred fest. Dani Meseguer and Johnny Lorca’s riffs evoke the essence Eddie Van Halen and especially Randy Rhoads, cutting and splashing with rapid fire combos of single notes and flashy chords. There’s a lot of movement in them that give the music serious momentum; I have fallen lustfully for the main riff in “Heroes,” hot DAMN. And the leads are sweet. Guitar solos abound and they’re so much more than just emotionless noodling. Each one displays great melodic contour, clever phrasing, and a nice variety of licks and techniques (and yes, plenty of speed). The performances are dripping with musicianship, and not just in the guitar section. John Synhx’s drums are fast, loud, and tight, and his snare hits like a sexy cannon, with just the right amount of punch and reverb. The bass, played by Satan, is subtle but supportive. Alexx Panza sings with dramatic zeal, exploring a broad range and exercising fantastic control and expression. He has a nice, wide vibrato that settles in nicely as he wails along. He’s really nailed the tone and style of the genre.

Twist Of Fate starts off explosively and just gets better as it goes on. In fact, the last two songs may be the best on the whole record, despite the lead-off, “Take It All,” being an absolute jam. A lot of bands make the mistake of front-loading their releases with the better songs near the beginning, and then they tend to drag badly later on. That is not the case here. Twist Of Fate is divided in half by a short instrumental guitar arrangement called (obviously) “Svccvbvs.” It’s a welcome and well-timed breather before things take off again—and they do take off. The album blazes through five more songs then ends on an energetic high and begs you to hit repeat.

It’s clear that these boys have a lot of true passion for heavy metal and that classic sound, and good writing, production, and performances have made Twist Of Fate into something that is very alive. There’s a word to describe a record like this, and that word is “banger.” It’s a very authentic speed/heavy metal experience, and it’ll blow your skin-tight leather pants right off.