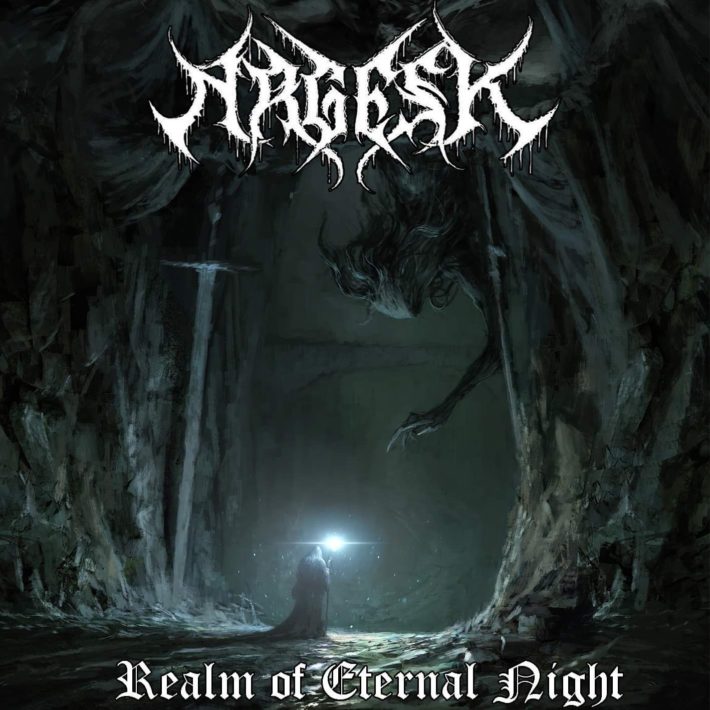 Argesk’s Realm of Eternal Night starts quietly. A pitch-black piano whispers, nothing but solitude surrounding it. You think it’s going to build or explode into a light-filled fury, but that doesn’t quite happen. For the entire opener “Spellbound by Candlelight,” only a spark of sound escapes the minds of the new British black metallers. It keeps feeling like it should build to something more, but it doesn’t. The piano sounds nice enough, and the melodies are enjoyable enough, so it’s fine. Hopefully an explosion of fury in the second track will justify the slow burn. A candle flickers in the dark, foreshadowing the supernova-sized explosion sure to come.

Then the second track, “Lord of the Boundless Void,” hits. It ends up being…fine. Boilerplate symphonic black metal, performed with competence, but nothing special. No pay off for the first track. Again, everything sounds nice enough, and the melodies are enjoyable enough. Oh,well. Maybe it’s still just laying the groundwork. The promo material described an album that contained an “overwhelming elixir of reverence and horror bound in song,” and that definitely can’t refer to this. This is probably just put here to establish the band’s sound so that they can distort it later. After all, you can’t break a rule that’s not in place. You need to have a formula before you can defy it. The next track is the title track, surely it will be better.

It’s not. You already know it’s not. Argesk are reaching so, so hard for the epic majesty that the titans of symphonic black metal can conjure that it is somewhat painful to hear them fall short. The elements are there. Sort of. There are strings, long build-ups, grandiose and catchy guitar lines. Come to think of it, though, the guitar lines never quite stick in your brain the way you’d assume they would. They’re pleasant, or at least pleasant enough, and then they’re gone, whisked out of existence. There isn’t even any smoke slinking off of the already-extinguished candle, no longer flickering in the dark.

The album never recovers, and the light has been seemingly extinguished forever. You were promised an album that “celebrates tradition while forging a new path of darkness and fire,” and while whoever wrote the promotional material for this thing did an exceptional job, the same cannot be said for those that wrote the music. Why? What went wrong?

You start to realize what’s missing on the fourth track, “Adversary.” As the chorus screams at you to renounce the ways of christ, as well as eternal life, in the most hollow and boring way possible, you realize that their established formula can never be broken because it was never really adhered to in the first place. The satanic howls of “Matt IH” are not conveying passion, nor do they seem to be using their imagery for fun or for aesthetic. The satanism present sounds like it’s only there because it’s expected to be. Same goes for the piano intro, and really everything about the music. As you look closer, you realize that what you thought was a candle was actually just a piece of paper cut-out and colored orange with a lamp behind it. Someone turns the damp fluorescent lights back on, and you leave a somewhat ordinary and bland building disappointed. You hit every red light on the way home.

As you’re driving back, you admit that it wasn’t all bad. The production was fine, the riffs, although not great, managed to satisfy you in the moment. Your memory is already fading, but the musicians seemed to play their parts well, and everything seemed slick. It just didn’t end up mattering. By the time you get home, your memory of the event has faded to black. Or rather, is still black. There was never any light in the first place.

Realm of Eternal Night could be enjoyable to others, and is a promising debut. It’s not poorly made, just somewhat artificial. If you’re somehow craving symphonic black metal after the abundance of amazing black metal that’s already come out this year, check it out. I won’t be joining you.