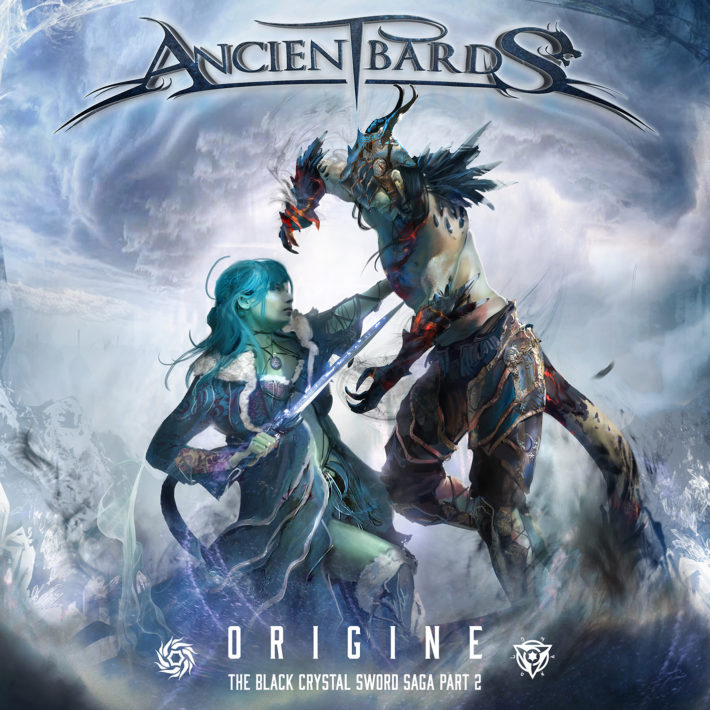 For as big of fan of symphonic metal that I am, I am ashamed I’ve missed out on Ancient Bards until this point.  The genre certainly has been oversaturated with Nightwish knock-offs and Epica look-alikes, but that doesn’t mean there aren’t those with genuine talent and originality.  Ancient Bards is one of those bands, having already put out three excellent concept albums in an overarching fantasy series entitled The Black Crystal Sword Saga.  Origine is a continuation of that, but in a new cycle of what will most likely be (I’m speculating because I don’t know for sure) another three albums.

Things start off on the right foot with perhaps one of the best intro tracks I’ve ever heard.  Narration is always an incredibly tedious element to deal with; most of the time it is overused and abused.  But the narration found on “Origine” is mixed just right with the music underscoring it. It then kicks off the rest of the album that is just flat out massive and epic.

Songs such as “Impious Dystopia” and “The House of Rejects” show off the band’s experienced hand at writing huge and fast songs.  Never has a symphony ever sounded so huge as it does on this record. Ancient Bards fully utilizes the entire range of the symphony, from the big, epic choruses of the previously mentioned songs to even a subtle oboe melody woven into the beginning of “Oscurità”.  If that wasn’t big enough, the band threw in a fully-formed choir for good measure, creating a dense wall of sound that completely envelopes you. But it’s not just the symphony and the choir that shine on this record.

Somewhat unexpectedly, the bass player makes it well known that he will not just sit back and play root notes the entire time.  Obscura-esque bass noodling can be found anywhere on the album, and a rather epic bass solo (not unlike Symphony X) appearing on “Impious Dystopia”.  There have been some similar moments on their previous albums, but it’s this album where bass is made a crucial part of the musical world that Ancient Bards are creating.  It should also not go unnoticed that the band’s ability to blend with its orchestral counterpart. The guitar solos found on this record are well done and don’t overstay their welcome, such as the one found on “The Great Divide”.  The drums bring a sense of ferocity to the music, never letting it sit and stagnate.

The track “Light” is the only ballad to be found on this album, and it is gorgeous.  It’s one of those songs that would be played on every major radio station if a famous name like Céline Dion was singing it.  I’m glad that Céline Dion isn’t singing on it, however, because vocalist Sara Squadrani knocks it out of the park. In fact, the vocals on this album are perfect.  Whether beautifully handling the ballad, or singing her heart out on my personal favorite track “Aureum Legacy”, the vocals are executed perfectly.

Ancient Bards seemed to unleash their inner Two Steps From Hell on this album.  That’s part of the reason why the intro track is so awesome. “The Hollow” really shows off this side of the band; being largely instrumental, it is perhaps some of the most exciting three minutes on the album, using the symphony to create exciting textures that move the song forward.

This album is like a fantasy novel come to life.  Not only is the music astounding, but the story is incredibly compelling.  This works because of how well Ancient Bards is able to create an emotional connection with the characters.  You can feel the father’s love for his children in “Aureum Legacy”. The son’s anger toward his father and jealousy toward his sister is made tangible in the song “Oscurità”.  The story works because of this level of emotional connection.

I love this album.  It has all the elements I love about symphonic metal (huge choruses, abundance of symphony and choir, soaring vocals, and hard-hitting metal) combined onto one album.  Ancient Bards have gotten better with every album and this one is no exception. This is without a doubt their best record yet, and I already can’t wait for the next one.  I judge an album based on its ability to make me come back and listen to it again, and I’ve listened to this one several times, with many more times to come this year. It is one hell of an album.

Cirkeln - A Song To Sorrow Review
Cryptopsy - None So Vile 25th Anniversary Review
Behemoth - I Loved You At Your Darkest Review
Ewigkeit - Starscape 2.019 Review