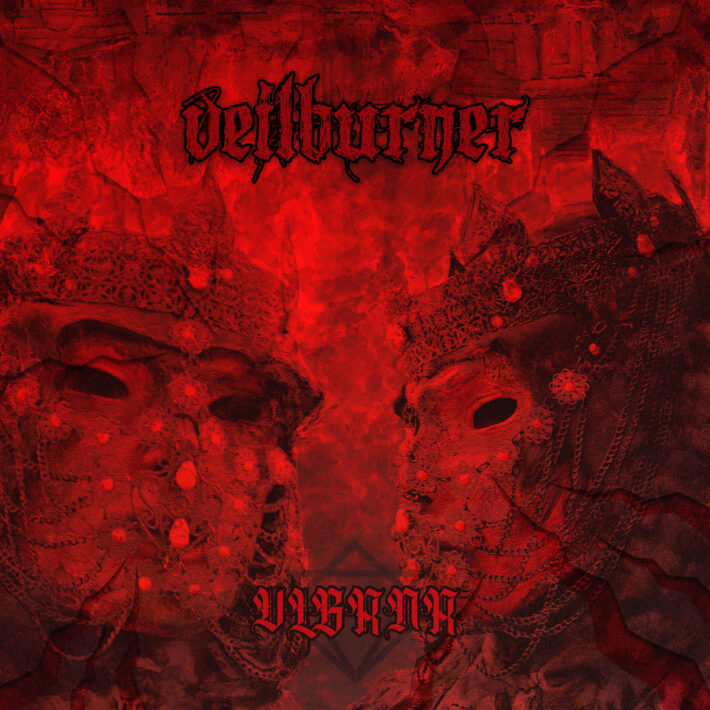 Veilburner are a weird death metal band from Pennsylvania. They’ve had their name swirled around various metal discussions for a few years now, earning a name as a group that creates interesting, pseudo-progressive music. In the past I’ve wanted to like Veilburner’s music more than I actually have. Their most recent two albums, A Sire To The Ghouls Of Lunacy and Lurkers In The Capsule Of Skull, both consisted of wild and sporadic death metal that darted around like a miniature nuclear bomb stuck in a pinball machine. Their new, much less interestingly-titled release VLBRNR, continues this sound. Unfortunately it also continues my disinterest in this band.

Even though VLBRNR doesn’t end up appealing to me, the songwriting shows up strong. Starting with the opening riff on “Vulgar Incantations” and continuing through the rest of the hour-long release, Veilburner have precisely crafted a well-thought out and captivating experience. The riffs and longer guitar lines unfold into the greater song, simultaneously providing memorably moment-to-moment melodies and creating a larger journey as well.

The vocals aren’t for me, but they don’t hurt the record too much. There is plenty of variety in these growls. Just like the guitar lines, Veilburner make the exact noises they want to build a larger sound. This results in some odd moments that don’t work, but more often it results in more vocal variance than one usually finds in death metal. Veilburner are excellent at creating big swings in atmosphere using every tool they have.

The production doesn’t fit this record. VLBRNR sounds artificial, like death metal created in a lab by aliens without ears using only the vibrations of a mosh pit for guidance. Something about the drums and bass makes my brain think of them as programmed instead of played, and this affects the listening experience of this record far more than with other bands. As a result, listening to VLBRNR feels somewhat like watching people listen to a concert rather than watching the concert listening to the concert itself. That being said, the bass is clean and present, and the production doesn’t make VLBRNR more difficult to listen to, so your mileage may vary greatly.

VLBRNR lasts a while. For a fan, the length will only increase their appreciation of the record, the band explores their space and the music doesn’t become too repetitive. But I end up getting worn down by this record. Finishing VLBRNR took effort. The individual songs can also overstay their welcome, although there isn’t anything too egregious on here. This also happened with their last two releases, so no surprises, but this is another realm in which Veilburner haven’t changed for better or worse.

None of those things kill this record for me. What finally fells VLBRNR is a lack of coherence. There are two halves to Veilburner: the death metal and the experimentation. They don’t play well together. Other experimental death metal throughout the decades, from Gorguts to Pyrrhon, use death metal to compliment their writing style. Even other groups that aren’t as crushing as those two still benefit from their melding of styles. The death metal aspects of VLBRNR actively clashes with the songwriting.

This is just what Veilburner is. Their fans will love this record, I will continue to wonder what I’m missing. VLBRNR, along with the rest of the band’s discography, simply misses me. Veilburner have a lot of upside, but this band’s style shreds both what I enjoy about death metal and the more exploratory side of music. I recommend this to any death metal fans who are looking to stray off the beaten path, but I get the picture that Veilburner just isn’t for me.