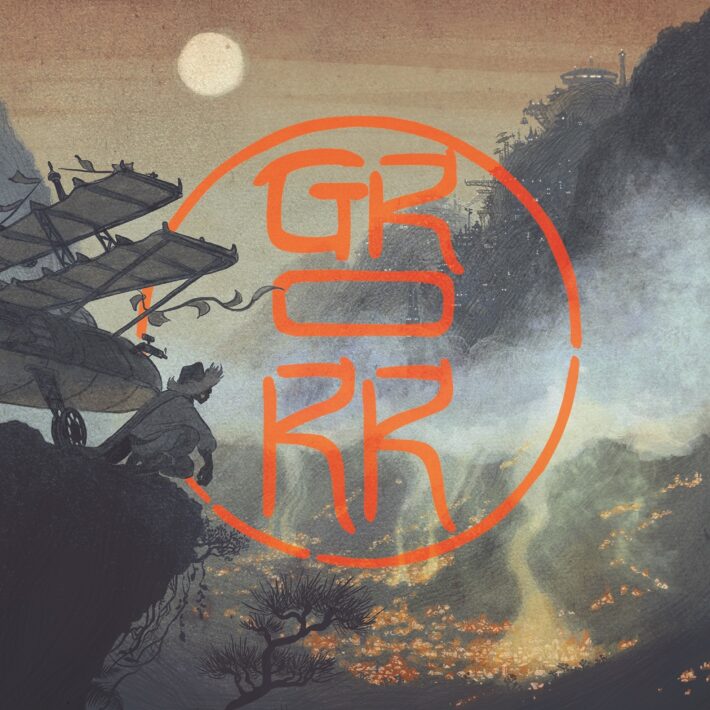 Grorr is a band from France that was founded in 2005. They mix progressive metal, math rock and symphonic soundscapes that almost sound like movie soundtracks. What stands out is their use of traditional instruments from all over the world. Ddulden’s Last Flight, which is set to be released this Friday, is the band’s fifth full-length. It’s a concept album about the journey of a hero, named Ddulden. According to the band, the album’s cover is also the opening scene: Ddulden who is “about to step into the void riding his handmade flying machine to achieve his lifelong goal: reach the peak and explore what’s beyond.”

This opening scene is perfectly translated into music. The intro, which starts with a sitar, immediately takes you to the misty mountains of the cover. More symphonic elements join in, creating a soundtrack to the story and the image. It perfectly flows into Sky High, the album’s first full song. The syncopated rhythms immediately show the ‘prog-side’ of the band. Another thing that stands out is how prominent the bass guitar is. Whereas the bass often plays a supporting role, Grorr puts it in the front, right next to the guitar. When the guitar joins in as well, it gives the music a ‘thicker’ sound, and makes sure the music really leaves an impression. The players prove to be skilled, for the riffs are complex in melody as well as rhythm. These rhythms are reinforced by the drums, which tightly accentuate them. What’s cool is that the traditional instruments aren’t just used in the intro, but they play an important role in the accompaniment of the rest of the instruments. There’s a constant flow of new melodies and new instruments that join in, keeping the listener engaged all the time.

Another interesting aspect of the music is the vocals. These are quite diverse, both within songs as well as throughout the record. From clean vocals, to high-pitched melodies, to rawer, low-pitched vocals and even throat singing, they adapt to the story and to the different soundscapes. These soundscapes change constantly throughout the album. At times it may feel a little sudden, but overall it works well. At one point, the music may almost be purely progressive metal, when all of the sudden there’s an easy-to-follow chorus, and then some strings and woodwinds may create a symphonic interlude, like on Ddulden Flies to His Fate. Especially in these interludes, the album feels like a movie soundtrack, and the band aptly paints the picture of the story they’re telling.

Despite the odd time signatures, the syncopated rhythms, and the raw guitars, the music in general is pretty laid-back. It’s never too intense, and although it’s intriguing enough to keep your attention for its complete duration, it would also work as background music to listen to while doing something else. Last Flight, however (which is the final track aside from the bonus tracks), is quite a bit heavier than the rest. It’s got a faster tempo than most of the other songs, and it’s especially heavy on the guitar, making for a powerful finale.

In conclusion, Ddulden’s Last Flight is an intriguing record on which Grorr have skillfully mixed progressive metal/rock with symphonic soundscaping. Whereas sometimes the traditional instruments stay in the background and accompany the bass, guitars, and drums, on other tracks it’s the other way around. For instance, when a simple motif on a sitar is expanded upon by the other instruments. It’s a good album that captivates you as soon as you put it on, taking you along with Ddulden’s flight through the mountains.