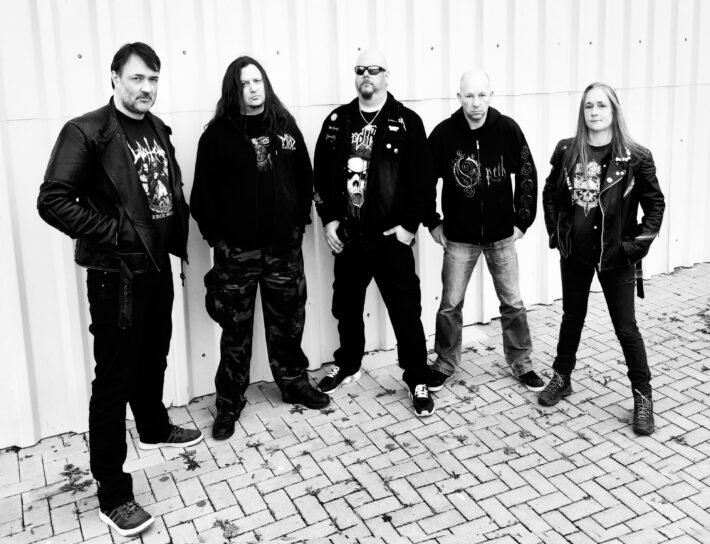 German long-time melodic thrashers Final Cry are about to release their sixth album, a captivating ode to heroic and tragic mountaineering explorations. I had a chat with profound expert of metal history Kai Wilhelm, to discuss the new album and the past and future of the band.

Hi, this is Rick! Who am I talking to, and what do you play in the band?

Hi Rick, this is Kai [Wilhelm]. I’m the vocalist of Final Cry and first of alI would like to thank you for the interest and this interview.

The main question right off the bat: why did you choose Mount Everest, and more broadly, famous and tragic mountaineering expeditions as a subject for the album?

The answer can actually only be: why not?
It is actually astonishing that the topic has not yet found any or only little attention in metal: the scenery full of cold, ice and snow and thus also the great mountain and climbing stories virtually lend themselves for a use.

They contain everything that is needed for a pathetic “hero’s tale” – struggle, comradeship, drama, triumph, suffering and death. There are already a few legends and fairy tales set in a icy landscapes in the metal universe, so we thought it was time to contrast them with the much more exciting true historical events.

Even if you don’t have a connection to alpinism, it’s hard to escape the fascination of mountains and mountain worlds; there is the majesty, mystery and inaccessibility that surrounds the rocky heights – and from the beginning, mountains and peaks have played a central role in the cultural history of mankind: they were places of worship and were considered the seats of the gods.
Even a certain Moses received his ten commandment tablets on a mountain, Mount Sinai.

The fact that the Everest of all places – even though some of the songs are about other mountains and storys – is the center of our album is certainly also due to the fact that it is the highest of all summits in the world.
Especially the dramatic race for the first ascent – and the mystery whether not before Hillary in 1953 maybe already Mallory in 1924 reached the summit, before he did not return from this expedition, make the Everest particularly interesting not only for mountaineers, but also for “outside” observers like us.

The Everest with its myths, legends and dramas is therefore clearly in the foreground of the album. Last but not least, its name lends itself to various interpretations and puns, as in the album title, and therefore it also serves as a metaphor for the urge of man to move into the wilderness, to set himself ever greater and seemingly unattainable goals and to find there freedom, peace, or even death.

Did you do any kind of research for the lyrics? Did you go mountaineering yourselves?

Yes, of course there was a lot of research. But the whole thing was a longer process and it was not explicitly aimed at the creation of an album in the beginning. It originally started out of a purely private interest.

The initial spark was certainly when Burghardt [Sonnenburg, guitarist] read the book “Into Thin Air” by Jon Krakauer a few years ago, which impressively describes the circumstances of the Everest disaster of 1996, in which several commercial expeditions wanted to bring their wealthy clients to the summit with all kinds of technical means – with devastating consequences.

Captivated by this story, Burghardt started to do further research, which is probably in his blood, because he works full-time in a museum where historical research is one of his tasks.
He quickly came across other events, myths and legends surrounding the ascents of the world’s summits, got to the bottom of them and it quickly became clear that this topic is predestined to form the cornerstone for an album concept.

Professional mountaineering is not practiced by any of us, but the fascination for it is shared by some. A few, like Sonja [Sonnenburg, bassist and keyboardist], even have a soft spot for climbing, also in nature and on smaller mountains and cliffs, and do it in their free time. But even if there are some parallels and maybe also has to do with the fascination for it – it is still something else than alpine mountaineering.

Do you think metal music would benefit from wider subject themes? Is this an “experiment” you’d want to repeat in the future?

Will metal benefit from this? Definitely. Maybe not on the subject of mountaineering in particular, but on the use of content-related concepts in any case.

What would the metal world be without the great concept albums of the genre? And each of them has enriched the thematic world in metal at the time and even opened it up for some themes in the long term. Be it Maiden’s Seventh Son Of A Seventh Son, or Savatage’s Dead Winter Dead, or all the albums that brought Norse mythology into metal, maybe even starting with Manowar’s Sign Of The Hammer.

We must not forget that in the early days of metal, depending on where you place this beginning, there was not exactly a wide range of themes, which over the years has expanded more and more and creating their own subgenres. Complete styles like Viking, Black, Occult or even Folk, Dark and Gothic Metal have basically sprung from a concept of content.

For Final Cry the whole thing is by the way not a unique experiment, because almost all of our albums are “concept” albums, whether in the narrower or broader sense.
Wolves Among Sheep [2002], was conceptually about a critical examination of Christianity and the Scriptures.
On Neptune’s Relief [2007], on the other hand, everything revolved around the conquest of the world’s oceans, from pirate legends to the so-called “Greenland trip”, which served the European whaling from the 17th to the 19th century, which includes overall also a clear criticism of the commercialization of the oceans.
On Zombique [2018], the lyrics were under the sign of various zombie, and voodoo cults; here, too, relevant literature as well as various myths and legends, but also historical persons and events were addressed, whose backgrounds can also be understood as a reckoning with colonialism.

Dedicating our albums to a thematic focus has simply developed over the years into a tradition and a unique position, which is very important for the band’s self-image. Final Cry stands for demanding, relevant, profound, sometimes also mysterious lyrics and thus basically also, if you want to see it that way, for concept albums.

Final Cry has been around for quite some time – thirty years in 2022! What do you think has been your biggest accomplishment so far?

Actually it’s even 33 years, because the basic line-up exists in this constellation since 1989. It was already in 1989 Burghardt, Eiko [Truckenbrodt, guitarist] and Sonja decided to form a band, although at that time probably none of them mastered an instrument, which did not stop them from buying or borrowing equipment and start making music with the goal to create the most blatant metal band of all time haha.

I know that in some online sources 1992 is given as the founding year, and various band names circulate as “predecessor band”. But this is not quite right, because it was and is always the same band. Only about the band name there was no agreement in the beginning, cause there was no serious need for such a name in the early days: as long as you could paint a cool logo on a wall somewhere, it served its purpose.

It wasn’t until 1992, when the band was playing more smaller gigs and seriously thinking about the next step, such as recording a demo tape, that they decided on a name. It was “Final Age” in the beginning (based on the line «Living in the final age» from the Agent Steel song Guilty As Charged), but at some point (and why, no one can remember today) before the release of the first demo in 1994, this became “Final Cry”.

As far as the big accomplishments of the band are concerned, everyone probably sees them somewhere else for themselves.
Basically, of course, every album release, and every associated step, is a highlight in the life of a band; because that is a point at which “something measurable happens”. This does not refer to sales numbers, but an album release is always a new step that leads the band to new shores.

Beside this perhaps the most striking highlight was the second place in a local band contest in 1995, because the prize was a studio recording. In a “real” studio with a professional producer, where the Stormclouds demo was created [published in 1996]. Without this demo some things would have surely developed differently, who knows – maybe we wouldn’t be here today doing this interview. But just like Stormclouds, each subsequent and following album has opened new doors and new sections for Final Cry.

From this point of view, The Ever-Rest is of course also a big accomplishment for us. On the one hand because we have with MDD for the first time a label in the back, which opens international distribution channels too, and in terms of promotion it has much more options to support us than it was possible before.
On the other hand, it is also the next step for us in terms of songwriting and arrangements. We’ve never been known for making the same record again and again, so almost every Final Cry album is different from the other, of course without being a different band. But The Ever-Rest I think is the most layered record of all. There are our classic thrash metal roots, but also there are those dark death and even black metal vibes, and at the same time epic monk, and even polyphonic power metal choirs.

It’s almost as if on The Ever-Rest all the threads the band has spun in their career come together. Our own musical roots, the classic heavy metal of the 80s and the later influences of the Scandinavian styles of the 90s unite to form a huge avalanche.

What does the future hold for the band?

Well, first of all we hope that The Ever-Rest will make a lot of metalheads happy.

Also we hope to have the opportunity to play as many shows as possible, which is unfortunately not our choice in times of the pandemic. Our goal for now is to bring the songs from the album to the stage and maybe play some festivals this year or next year. Time will tell everything else. Who knows, maybe Burghardt will read a book about an exciting topic, which will inspire him to write a new storyconcept for a next album.

Many many thanks to everyone from Final Cry for this interview! The Ever-Rest is due to be released on March 18th 2022 and you can pre-order it on Bandcamp. Follow the band on Facebook and Instagram and don’t miss any update, or visit their website here!