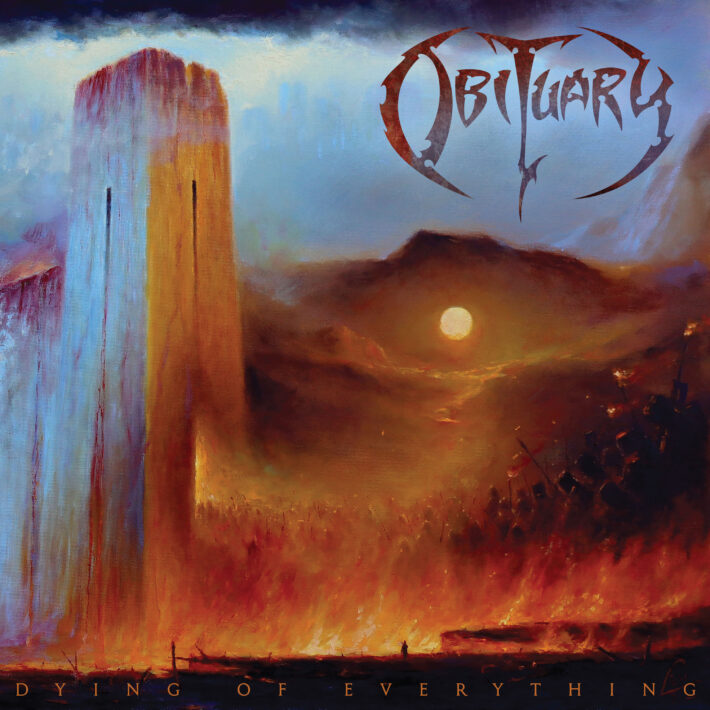 2022 was a year of old guy comebacks and success stories. Autopsy, Megadeth, Immolation, Blut Aus Nord, Psycroptic, and Satan, among others, released albums of various high quality. Obituary look to start the new year off on the same foot with their eleventh full-length album, Dying Of Everything.

If you don’t know them, Obituary are one of the ancient giants of death metal. Their 1990 release Cause Of Death remains an album that you can’t avoid if you dive deep enough into death metal, and they’ve been chugging along with some minor interruptions since. I wouldn’t consider it fair to describe their sound in comparison to other death metal bands; other bands sound like them. Regardless, Obituary plays an older style of death metal that still explores it’s base as an off-shoot of thrash metal, rather than a full genre that’s collapsed into its own off-shoots.

The core of death metal throughout all of its different variance has always been the riffs. Obituary deliver on this count. The band casts aside all temptations towards extravagance, and instead focus almost entirely on massive, straight-forward guitar lines. These guys are death metal legends for a reason, and they certainly know what they’re doing. The riffs on Dying Of Everything hold the album up and provide continuous enjoyment no matter how many times I listened to this thing.

The rest of the music, not as much. While Obituary’s riffs aged to be distinguished and elegant, the vocals have aged to feel out of time and awkward. On older Obituary releases, the vocals were part of the charm. Late 80s/early 90s Florida death metal had vocals that sounded more like a mix of hardcore screaming and thrash vocals than the guttural bellows that would later evolve, and Obituary has not changed that approach. With modern production, this just ends up sounding off, like walking through a city and seeing someone riding a horse in plate armor.

Other than that, the bass does a good job of filling out the bottom end of the sound and the drums support with aggressive fills and dutiful blast beats. Neither really stand out, but the album keeps chugging along all the same. Obituary are experienced enough at this by this point, they know they don’t need to play something wild and crazy to create an effective atmosphere.

Outside of the excellent riffs, there is nothing special and nothing unexpected on Dying Of Everything. Obituary have made simple, fun death metal that’s straight down the middle. Listen to the opening minutes of “War,” then look me in the eye and say that you don’t love life. A slow build up, followed by a bone-simple, yet devastating riff, followed by Obituary basking in their heaviness and grandeur.

Of course, then there’s the subsequent minutes of “War,” which don’t go as well. I didn’t listen to Dying Of Everything as much as I thought I would. While the riffs are excellent and supported well by the rest of the band’s sound, they tend to stretch out single ideas farther than they should on this record. The result is an album that drags by the middle and lasts longer than it should. While I enjoy Dying Of Everything, I tend to want to get bored and wander off before the album ends.

It’s Obituary. You aren’t getting any surprises. Solid death metal that’s aged and weary at this point. The bad news is that this is closer in quality to Megadeth’s new album than to Autopsy’s new album. The good news is that I enjoyed the hell out of Dying Of Everything despite the record’s weaker aspects. If you’re at all interested in old school death metal, here’s a good album for you. If you’re looking for the newest, cutting-edge innovations in extreme music, this might not satisfy you.