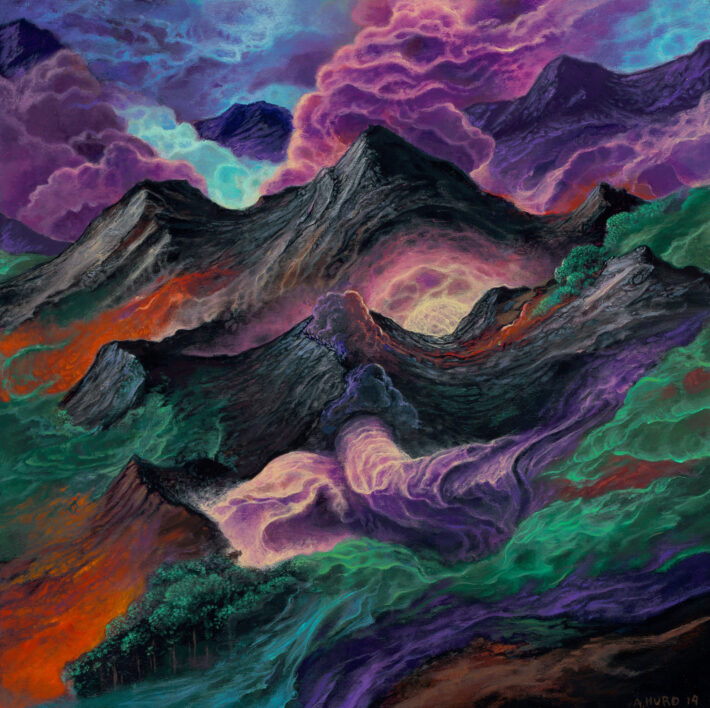 To get Noltem, you start with your atmospheric black metal stalwarts. Your Mare Cognitums, your Spectral Lores, your Panopticons. You then blend with equal parts of melodic black metal: Dissection, Dawn, and the like. On top, you sprinkle your choice of Moonsorrow or Agalloch, depending on the track and your mood that day. You bake all of this just long enough to make it hefty, and there you have it. One intriguing blakc metal band coming right up.

Noltem are a melodic and atmospheric black metal band from the US. They apparently came out with a demo in 2005, promptly did nothing for ten years, released another short EP in 2015, vanished for another six years, and now arrive fully-formed with their debut full-length release Illusions In The Wake. I haven’t listened to their earlier works, so I don’t know how Noltem evolved. Illusions In The Wake sounds much more like a sixteen year project than a debut release.

Noltem doesn’t take tentative footsteps. Illusions In The Wake twists tightly around its melodies, never letting the listener get too far away from what works for the album. For a record with atmospheric roots, the tracks maintain a level of passion. Even the mellow moments don’t wallow. The gleam of a veteran band shades Illusions In The Wake, and it feels much more like a comfortable old shirt than a flashy new thing or a just-painfully-birthed monster.

That begs the question: Who will find comfort in Illusions In The Wake? Not those who worship at Euronymous’s altar. Nor those who have left behind metal for the aesthetics of post-metal. And most importantly, not those who look for progressive experimentation. Noltem wrote some long tunes, but none break through the edge of the world like experiments of more wild musicians do. Noltem will be an old friend upon first listen, but only to fans of the more straightforward and melodic flavors of black metal.

Those melodies, though. Everyone who enjoys melodic black metal should give this a listen immediately. These tracks have been swirling around my head so much since I first listened to Illusions In The Wake that it feels like I’ve listened to this twice as much as I actually have. The atmosphere never gets too thick, and the tracks never get too far off track. Melodic throughlines make Noltem worth listening to at the worst of times.

Said worst of times occur in the second half of every track. The record as a whole is only forty minutes, but I wish that every single song had been cut in half. Despite the astounding focusing power of Noltem’s riffs, I found my eyes and ears wandering after too short of a time. Either this group needed to take their songwriting in some more bizarre directions, or they needed to make some of the false endings that occur in the middle of their tracks true and call it a day. I liked all of the songs, but I wish that Noltem didn’t make so much of them.

Illusions In The Wake also doesn’t have an edge to it. This shouldn’t shock most listeners of atmospheric black metal, but it bears mentioning. I switched back and forth between this and Mare Cognitum’s Solar Paroxysm to figure out what was missing, and although it would be unfair to compare the two releases directly, it did help me find the needed ingredient. Illusions In The Wake felt too thin at times, as if an instrument went missing. I don’t think I’ve ever said this about a record before, but this atmospheric black metal album needed more atmosphere. The band nailed the melodic aspect of their sound, but it could have inhabited a richer world.