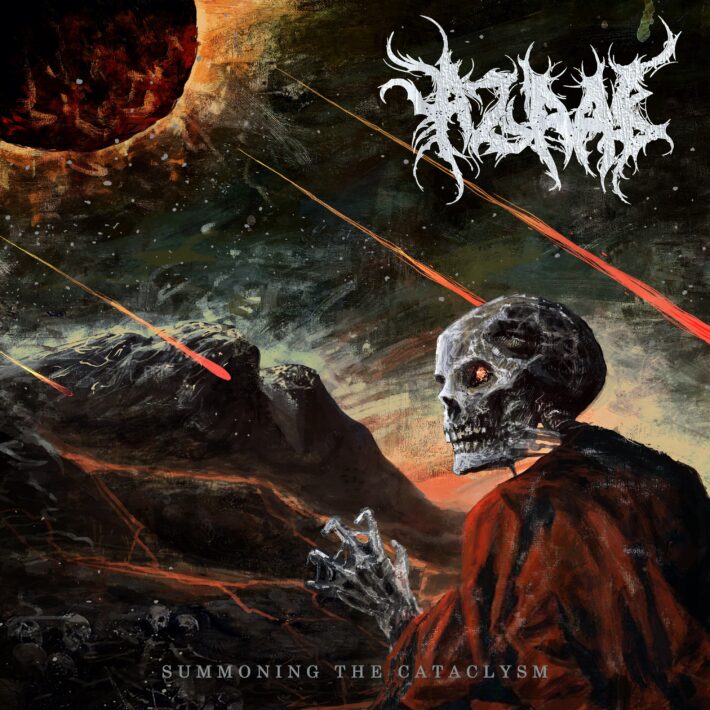 In my last review, I mentioned how much I love being able to find great metal in weird places. Fittingly, let me introduce Azaab, a death metal band from Islamabad, Pakistan. Their name means “calamity”, “torment”, or “divine punishment” in Arabic. In trying to get a gauge of what the metal scene is like in Pakistan, I found that the Almighty Metal Archives lists only 57 total bands from the country. According to an article* from April 2021, the metal scene in Pakistan is still very small, underground, and largely DIY, making Summoning the Cataclysm all the more impressive.

The band consists of established musicians from the Islamabad metal scene, the core of whom have known each other and played together for years. The creative force behind the band is lead guitarist Shahab Khan, who wrote a stockpile of material for this record. They enlisted Indonesian drummer Adhytia Perkasa from brutal death metal band SiksaKubur for session drums, and his destructive drumming style helps keep Azaab firmly grounded in brutality.

The centerpiece of Summoning the Cataclysm is the guitar work. Shahab writes swirling guitar solos and aggressive tremolo riffs to accompany brutal drumming capable of blasting your face off. Much of this album is a guitar showcase in the best way. The rhythm guitar tone is crushing, and along with the awesome bass they create a solid ground for the lead shredding to stand on. The lead tone can be a bit modern for my taste, but it’s not offensive. Shahab Khan’s writing is diverse, creating both intense technical parts and soaring melodic ideas, packing each song full of riffs.

Tech-death can be very hit-or-miss for me. But you’ll notice I didn’t label Azaab a tech-death band, and for good reason. A frequent complaint of mine about “technical” death metal is that often the guitars can feel like they’ve foregone melody for self-indulgent virtuosity, but Azaab manage to have their cake and eat it too. Even the most chaotic riffs feel reined in and deliberate, while sweeping solos don’t overstay their welcome. Verse riffs jump out at the listener, but never sacrifice a headbang-able groove, which lets the ideas flow smoothly from one to the next.

Azaab also utilize guest solos to add to the shredding climax of their best tracks. “The Infernal Citadel” features a guest part from Philippe Tougas of First Fragment, and the groovy “When Worlds Collide” centers on a solo from Bobby Koelble, who played guitar on a small underground album called Symbolic by Death. (You may have heard of it.)

Saad Latif’s vocals are characteristically old-school death metal, and their prominence in the mix also helps to keep the band sounding aggressive and brutal. My immediate thought was that he sounds exactly like Glen Benton. If you know me then you already know how I feel about Deicide, but in this case Saad’s vocals aren’t a detriment. I would have hoped for more variation, but he occasionally layers lows and highs to great effect. He mostly sits at a mid-pitch growl, which can grow a bit dull over time, but this allows the guitars to take the spotlight.

On the back of impressive riff writing, Azaab make a name for themselves with Summoning the Cataclysm. They’ve differentiated themselves in a way that lets them transcend being just “that death metal band from Pakistan”, and instead are a welcome addition to the world of death metal. Azaab don’t reinvent the wheel, but instead present a fresh and well-crafted collection of tunes certainly worth your time.