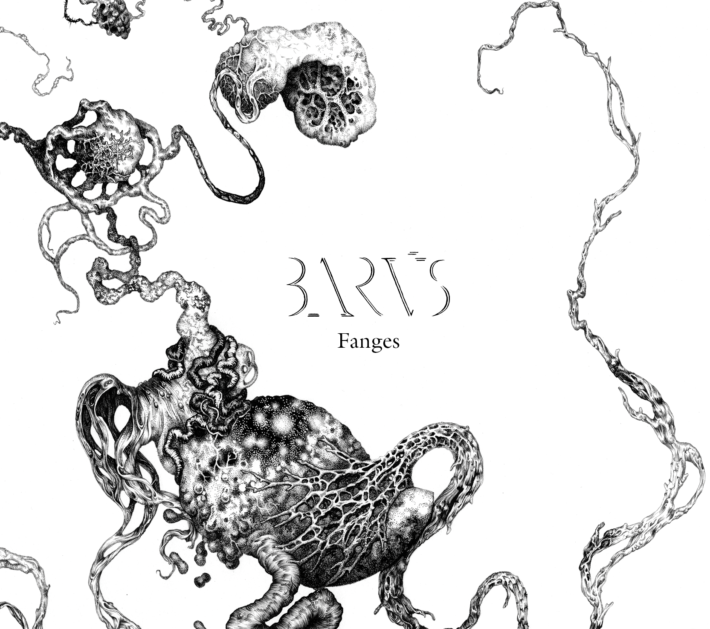 About three years ago, French progressive death metal band, Barús, released their debut full-length, called Drowned. It was an impressive record with a number of intricate songs, on which progressive riffs and complex rhythms alternated with groovy, more straight-forward death metal. This Friday, December 31st, Barús returns with their follow-up: an EP named Fanges. The EP consists of two monstrous tracks that are nearly twenty and fifteen minutes long, respectively, on which the band shows that they’ve kept developing themselves musically.

The first track, titled the same as the EP, came into being during the lockdown in early 2020. It’s the more experimental of the two, as it’s slower to build up and contains more improvised elements. The track starts with a few minutes of seemingly loose notes. As more riffs are added, though, the music/melodies get more and more coherent, until the drums rhythmically contextualize the guitars. Bit by bit, the melodies get expanded upon, and harmonic layers are added, gradually painting the musical picture of the piece. After this first passage, there’s a quiet interlude in which a mellow bass line and clean guitars lay the foundation for spoken word. The relaxation doesn’t last very long though, for dissonant droning sounds, which get progressively more distorted, create an unsettling vibe, and prepare the listener for a more straight-forward, headbangable passage. This passage is closer to the death metal sound Barús have put themselves on the map with. The drums are energetic, the guitars dissonant and distorted, and the vocals are expressive, alternating between grunting, spoken word, and something that comes closer to yelling.

Though the sound from Drowned is still recognizable, the energetic passages on this track tend more towards a doomy sound with industrial vibes, as opposed to the more straight-forward death metal sound of the previous record. The overall energy on this song is lower than that of their previous record, but its strength is in the musical story that’s narrated. Barús have clearly intended to do something different, which shows bravery as well as craftsmanship: they don’t play it safe by exactly recreating the sound that their fans have gotten to love, but instead they’re true to their musical authenticity by experimenting and continuing their musical development.

The next track, “Châssis de Chair” was written about a year later, and was recorded live in the band’s rehearsal space. This gives the track a different vibe than the previous one, a vibe that’s closer to that of their earlier albums. The track starts explosively, with powerful drums, distorted guitars, and agonized grunts. The energy doesn’t stay at this level for fifteen minutes though, for after the first passage, the band moves into a quiet interlude with a calm drum pattern and some minimalistic guitar riffs. The band once again succeeds in building up the tension by adding more and more layers, until the music is back at full energy. They do this various times throughout the piece, and whereas the subchapters on “Fanges” succeed each other more fluently, the changes in atmosphere and intensity are more sudden on “Châssis de Chair”. The different musical themes are put together in such a way, though, that it creates a lot of diversity, without sacrificing coherence throughout the piece. This is partly brought about by the instrumentation, which is thought out well. All instruments reinforce each other, but they also give each other space at times to bring certain elements into prominence.

In short, Fanges is an impressive follow-up to Barús’ strong debut record, Drowned. The band has kept developing their sound over the last three years, and they were not afraid to try something different on this release. It takes a bit of an effort to digest the pieces, but for those willing to do so, it’s definitely worth it. The EP’s first track is the more experimental of the two, and the second one sounds more like their previous work, while still containing new elements. So if you like your progressive death metal with a lot of other influences, you should definitely check out Fanges.