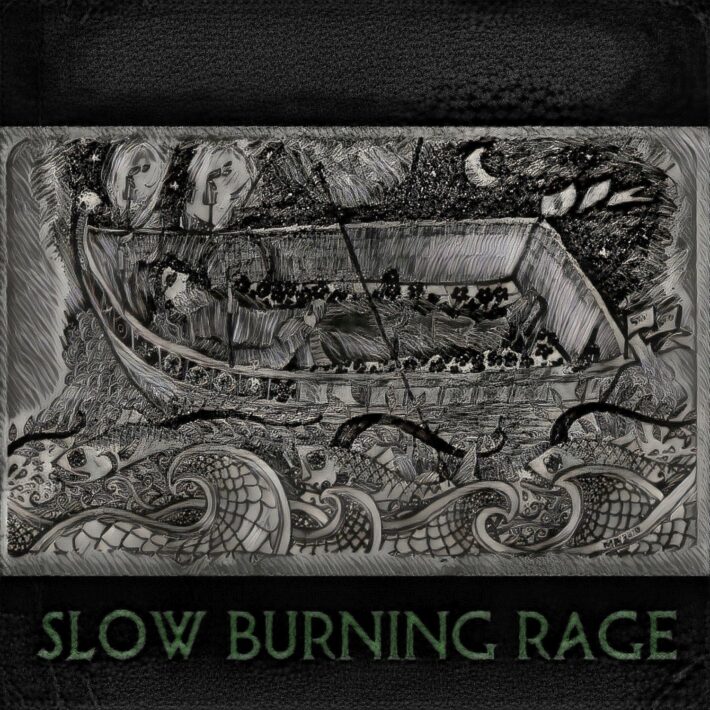 Slow Burning Rage starts with a fast and fiery explosion of free-jazz-esque saxophone. Aside from being a good first impression, opener “Agonal Grasp” sets the listener’s expectations for the rest of the record: This will not be a typical release. A hectic drumbeat then enters the scene and attempts to drown out the sax with the aid of some cacophonous electronics. The song doesn’t really do anything or go anywhere, but I never care. Not all music needs a destination. This opening track promises a wild and furious album.

That promise is immediately broken. The second track opens with some heavy tom drum rhythms after a moment’s pause, which lead into some catchy bass melodies that sound like they come from a completely different record than the first track’s blazing sax. The sound is quite nice, but again, the track doesn’t really go anywhere. There’s a final riff that I guess serves as the climax of the song before a long lingering closing note and yelp, but otherwise this song sounds perfectly happy existing for its own purpose. Again, not necessarily bad. And that main melody is catchy. I found myself humming it quite often throughout the day, without remembering where it was from.

Experimentation is the life-blood of Slow Burning Rage. The band has no fear to go wherever they think the music should take them. Quiet ambient passage? Sure. laid-back melodic moments? Lay them on. Near-metal rambunctiousness? Throw it in. It’s rare to hear an album with this much happening in this amount of time. Slow Burning Rage shows a complete disregard for genres or conventions, and the result is joyous.

However, this record felt like the build-up half of a larger, better record. I kept waiting for something more to happen. For all of the variety and crazy moments, Slow Burning Rage ended up sticking in my mind as a relaxed ambient/electronic record with some jazzy moments. While this isn’t the end of the world, it does feel disappointing. Slow Burning Rage could have been more. The talent’s there, the passion’s there, the willingness is there. But the record feels incomplete. For how many styles Slow Burning Rage visits, it doesn’t stay with any for as long as I want.

I didn’t hate Slow Burning Rage. My expectations, however, were out of whack. Slow Burning Rage could have been a wild and crazy journey through gloriously mis-matched genres of music, with the tension of the incompatible moments driving the record towards greatness. Instead it’s more of a sedentary moment. Kicked-back, looking through varied scenery, but not interacting with it. Maybe I would appreciate this record more if I had correctly set my expectations before I listened to it for the first time.

Slow Burning Rage is an intriguing record, and one I will remember. But the style didn’t work for me. I like crazy free jazz, but then this record dips into more sludgy sounds. I like sludge metal, but then the ambient moments come along. However, there are definitely people who will like this a lot more than I’d do. I’d recommend this to anyone looking into the weirder side of music.