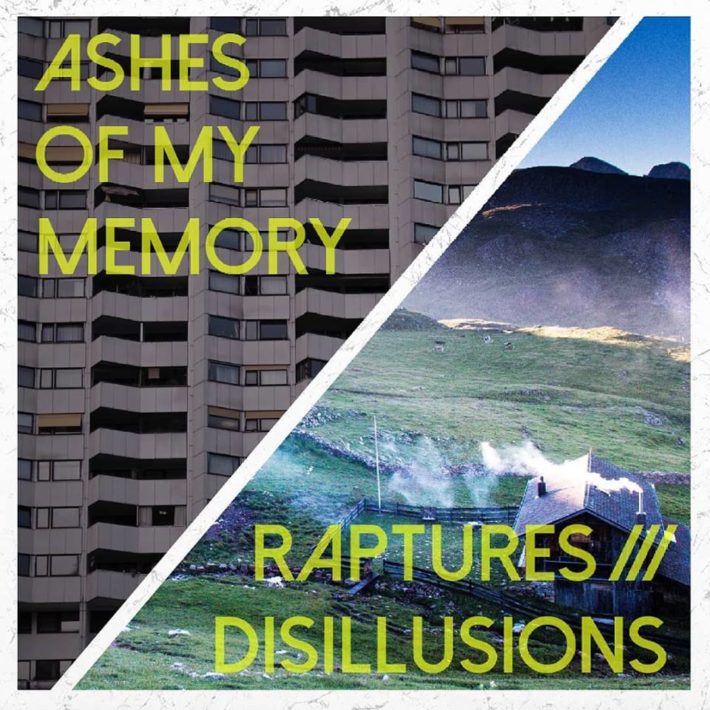 One of the benefits of the ubiquity of the internet and ease of recording technology has been an influx of new bands with all sorts of different approaches to existing genres, especially metal. Twenty or even ten years ago, it would have been difficult–almost impossible–for a metal band from northern Italy to release a self-produced debut that would be heard in the United States, regardless of how talented they were. Fortunately for those who have an insatiable thirst for new music, the current status quo allows the discovery and enjoyment of artists we might not heard of otherwise–artists like Ashes Of My Memory. The South Tyrol quartet’s debut EP is short but sweet, and an example of why it’s a privilege to be able to hear music from so many creators in so many places.

Raptures /// Disillusions is just two songs, which is not enough to describe the band’s identity, but those two songs are both over 8 minutes long. In fact, they’re almost the same length, which is a part of the EP’s most impressive achievement: a fully-developed sense of symmetry, and of balance. The two tracks are distinct and surely stand out from each other; the elements that share semblance are arranged in a way that completes the equity of a two-song composition and reflects the themes and ideas behind the pieces. In the band’s own words, “‘The Cycle’ expresses the strife for an imagined, yet inaccessible state of rapture…’The Decline’ stands for the disillusionment of the persona who is thrown back into the nihilism of the modern world.” It’s a rise and fall, and Ashes Of My Memory illustrate it not just in the lyrics, but in the composition itself. “The Cycle” periodically swings back to a powerful, driving chorus decorated by long, harmonized clean vocal lines over a VI-VII-I chord progression, ending on a resolving major tonic chord, instead of the regular minor. The major chord mixed in to the song builds a sense of intrigue and possibility, and it’s also an adventurous use of harmony. In the second song, “The Decline,” the same VI-VII shift occurs, but this time accompanied by guitar melody rather than vocal, and now resolving to the darker natural minor, reflecting the disillusionment of the decline itself. The EP is full of clever reflections and twists on arrangement and motive from the first song to the second, and the meticulous organization is truly progressive.

There are some interesting stylistic blends present here–the band has generally opted for tonal riffs rather than discordant ones, and there’s no heaviness lost. Periodic forays into post-rock-esque clean sections break up the dynamics, and there are colorful leads that appear to create some clear melody after longer rhythmic passages. Ashes Of My Memory are at their best on this EP when they’re playing faster, with more energy and movement in the instrumentation. The sections that drag tend to rely on sustained chords and longer, slower, drawn-out riffs–sometimes over quick, energetic drum patterns, and sometimes over momentumless, trudging grooves. When the band comes together to play high-pace, intense riffs at full tempo, it satisfies.

Self-produced debuts regularly suffer from deficiencies that are well-documented, but Raptures /// Disillusions sounds better than many of them. The EP was recorded and mixed at Sound Revolt Studio in Terlan and it’s a tight, hard-hitting production, although it runs very dry at times and lacks atmosphere. And while there’s not enough sonic depth, the performances are precise and clean, and they demonstrate a strong musical capacity.

It’s clear that Raptures /// Disillusions is a good piece of music. It’s sprinkled with brilliance and it has purpose, even if it sounds like the band is still developing their sound and identity, and it’s too early to tell what it will be. But at the core of this release are heaviness and creativity, and those are good signs for an emerging group. It’s a fine work, one whose greatest weakness is that it’s too short. Hopefully next time Ashes Of My Memory release music, there will be more of it.

Tracklist:
1. The Cycle
2. The Decline