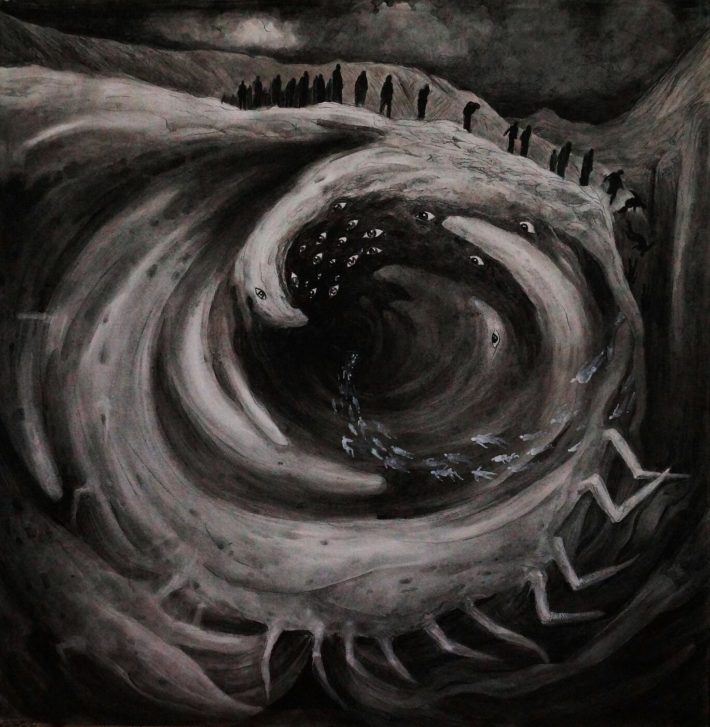 If there’s one thing we learned from bands like Septic Flesh and Rotting Christ, it’s that the Greek definitely know their way in death and black metal. However, whereas these two bands each have their own energetic and intense sound, Burial Hordes is something completely different from their fellow countrymen. With their new album, they’ve created a sinister, distressful, and misanthropic masterpiece that, without a doubt, deserves a place on the big stage.

One of the first things that stands out when listening to the album is the sound, which is intensely ominous, sinister and evil, achieved by dissonance in the music, a lot of variation in the drums and a deep, guttural voice. Not only in the drums, but also in the other instruments there’s a lot of variation over the course of the whole album, changing the feel of the music. Even so, it’s all very coherent, making it an experience that’s hard to forget.

Like mentioned before, the vocals consist of deep, raw, guttural grunts. It really reinforces the negativity and ferocity of an album whose title is Greek for “Eternal Death”. In Erkenntnis, for example, the parts where Cthonos (Burial Hordes’ singer) joins in with his powerful grunts show quite some resemblance with the intensity of Behemoth’s later works. Talking about intensity, the drums are able to build up and sustain the tension very well. Nuctemeron (the band’s drummer) doesn’t just use fast drum beats to support the intensity of the music, but there are also parts where he plays a slower drum ‘base’ which he fills with hi-hats and cymbals, making it seem more relaxed. For instance in Death is Omnipotent, overall a very intense song, he starts with a kind of slow drum beat, but builds up to a faster, more black metal-like beat.

The album starts off with Human Condition, a complex and diverse song, expressing the general nihilistic and negative feel of the album and setting the tone for the rest of it. It’s divided into three parts: isolation, meaninglessness and mortality. What connects them is the shrill guitar riff that’s alternating between two adjacent notes, creating dissonance and uneasiness throughout the whole song. Isolation consists of a heavy riff, a powerful drum beat and Cthonos’ deep vocals. About halfway through the song, when Meaninglessness starts, another riff is introduced that, for its part, creates friction with the continuous riff. In Mortality, the only thing that’s left from the previous riff is the bass guitar, leaving relatively large silences between notes, really emphasizing the hopelessness of mortality.

After an awesome black/death metal experience full of intensity and variety, the album ends with a 16 minute long song (From Synthesis to Aposynthesis) which is, like the first one, also divided into three parts. Synthesis, the first part, starts with two guitar riffs, creating quite some dissonance. When Cthonos starts grunting, it turns into a full-fledged black metal song, full of energy. After around four minutes, it’s time for the second part: Destruktion of Alethia. It’s quite a sudden change because whereas the first part ends with a relaxed drum beat, the second part immediately starts with the drums and guitars pounding at a high speed, making it really sound like Alethia (a Greek philosophical concept that’s roughly translated to ‘disclosure’ or ‘truth’) is being destroyed. The transition into the third part, Aposynthesis, is as sudden as the first one, but in reverse. From the powerful and aggressive ‘Destruktion’, it suddenly becomes more relaxed, with just the guitar playing some arpeggio’s. However, the music gets back its power soon enough, when the rest of the instruments join in. The tension keeps rising, until, all of the sudden, the song seems to decompose. All instruments stop playing, and after a few moments of (relatively) relaxed music, there’s just the drums with the guitars playing at the first beat, slowing down more and more, until the aposynthesis is complete.

In conclusion, ΘΑΝΑΤΟΣ ΑΙΩΝΙΟΣ is a tremendous album that’s diverse, yet coherent and keeps the listener hooked until the very end. Listening to the album is an experience that won’t be forgotten quickly, and the more often one puts it on, the more riffs, beats and (dis)harmonies can be discovered. While the band’s impressum is “Destroying hope since 2001”, they keep destroying hope in 2018!

Tracklist:
1. Human Condition
2. Thrownness and Fallenness of Being
3. Lurk In The Shadows
4. Erkenntnis
5. Death Is Omnipotent
6. From Synthesis to Aposynthesis