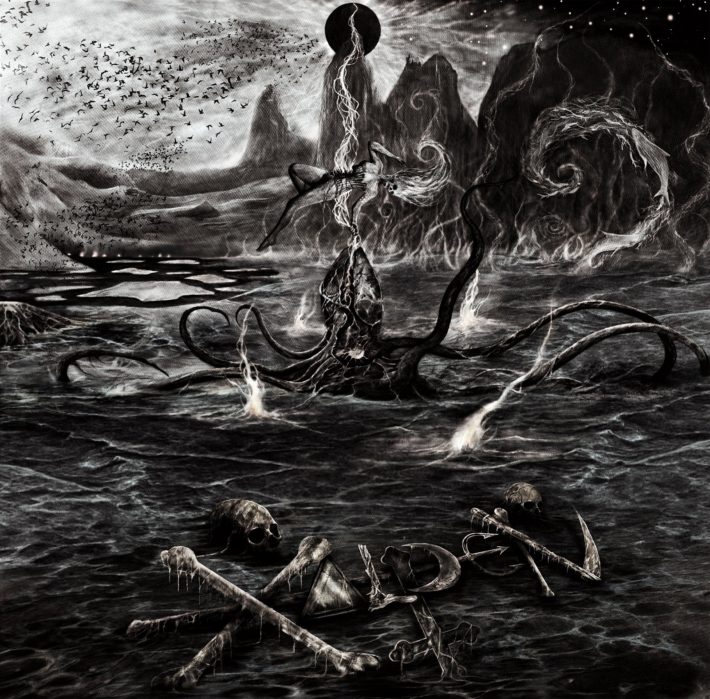 “Our work is a memorial to the past times and tradition of the ancestors, forgotten by many. Our art is an offering and sacrifice for the hungry gods of the underworld.”

This, among other things, is what the masterminds behind Xalpen have to say about their new mini-LP, Wowk Otrr. And to be honest, it’s quite a sound description. The whole album is written in such a way that it’s like an ancient ritual, especially with the double voices, evil laughs and atmospheric soundscapes. It’s so dark, intense and overwhelming that it’s definitely a sacrifice listening to, offering your happiness to the hungry gods of the underworld. Even so (or especially because of that), I’d recommend anyone to listen to this album at least once, for it’s an experience that’ll leave you feeling reborn.

What is it exactly that makes it so ritualistic? First of all, one of the most obvious aspects is the language. It seems like an ancient, tribal language which really strengthens the ritualistic feel of the album. Another one of the key factors is the voices, that are different from the general black metal sound. It so happens that there’s not one, but two singers in the band. One of them has deep, guttural grunts and the other one has a higher voice. The higher voice has the upper hand, but supported by the deep voice it makes for a feeling as if there’s a group of people chanting (while, in effect, there’s just two). Something else about the vocals is the evil laughs that appear throughout the album. These suggest that the band members are really performing a ritual that develops over time.

In the more atmospheric parts of the album, the bass guitar plays an important role. After an intro that consists of some twenty seconds of static, on Kay’taw hawrr sho’on palakaw-msh (A Cold Rain Under the Cloudless Sky), the bass guitar is the instrument to start off the album. It plays a sinister melody that, together with some screeching guitar notes, makes for an ominous intro that will soon burst into a full-fledged black metal song. On the later songs, there’s a lot of atmospheric background noises that, together with moans of agony and ritualistic chants, suggest that Xalpen’s “drink of Death and no food for the worldly ego” that they call Wowk Otrr is almost complete.

In general, the guitars have a pretty straight-forward black metal sound, but there’s some riffs, like in Xosh Kassek (Chant to Hosh), where they bend the notes in a way that they are just out of tune, creating an unsettling feeling of dissonance that adds to the sacrifice that is Wowk Otrr.

The album’s structure is interesting, because as the ritual progresses, every song seems to have a longer, more atmospheric intro. Whereas the first few songs are almost entirely classic black metal songs, the last few songs on the album are more and more atmospheric. Wowk Otrr (Oculus Australis), for example, starts with one minute of atmospheric soundscapes and ritualistic chants, after which it’s accompanied by a sinister sounding (bass) guitar, without proceeding into a classic black metal song (like the other ones). In Sèyta (The Barn Owl) they’ve completely separated themselves from their original sound, ending the ritual with a piano suite that proves they’re not just skilled in making black metal, but also in writing music on other instruments.

In conclusion, Wowk Otrr is a great album that really carries the ancestral, ritualistic tradition that Xalpen wanted to express in their music. The structure, going from the original black metal sound to more and more atmospheric songs, really makes it seem that the album decomposes into “absolute nothingness”. The drums and the overall guitar sound aren’t too interesting, but Wowk Otrr has a lot of other ingenious aspects that do make it an album that’s worth listening to. Even though it’s a mini LP, it’s so powerful and intense that it feels like more than an hour of music has been compressed into just over 24 minutes. So sit back, put on the album, and let yourself be consumed by, sacrificed to, and reborn by the hungry gods of the underworld!