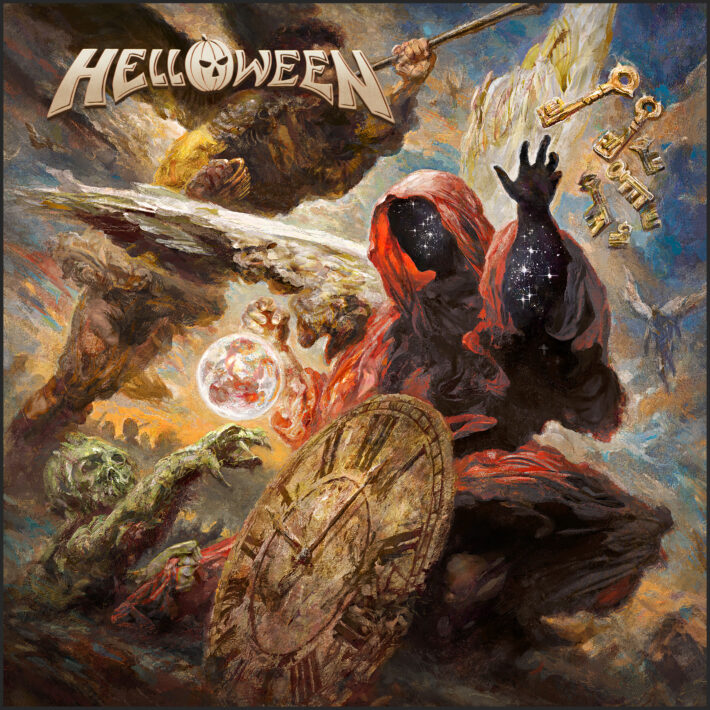 Reunion albums. Fans always seem to need to hold their breath. Will they hear Brave New World, or will the band decide that Ilum Divinum Insanus is a good idea? No one really knows what the reunion will do to the legacy of the band. Nothing to do about it other than dive in and hope for the best.

Helloween are one of the giants of power metal, and are as much a part of the genre’s DNA as any other band. As with any band of their age, they’ve had their ups and downs, but I thought that My God-Given Right, 2015’s predecessor to Helloween’s new self-titled album, had a good enough sound. Since that release, founding member Kai Hansen, a legend in his own right, has rejoined Helloween after decades apart. My expectations going into this were relatively high.

If you’ve heard Helloween at all, you know what to expect from their self-titled album. This record pelts the listener with uplifting, harmonized choruses and riffs that sound straight out of the 80s. These choruses won’t disappoint any reasonable fan. Helloween didn’t waste their time chasing trends of any sort, this record sounds like a bunch of old guys having fun with what they know. Despite the band’s age and their proclivity for metal ripped straight from 1986, Helloween contains an impressive amount of energy. Between soaring vocals and impressive solos, Helloween have only managed to only sound their age in the good way.

Helloween just plain know how to write great tunes. They hooked me in and held me in place for longer than I expected it to. The songs mostly maintain their excitement and keep the listener fist-pumping for a long, long time. Individual tracks stretch the realm of reason, and the album as a whole lasts for a gigantic sixty-five minutes, but despite all of this I never grew even the slightest bit tired of Helloween. It never bogs down, it never starts to wear thin. If you are at all interested in Helloween, you should stop reading now and put this record on. You’ll need the extra time to listen to this album, and you’ll have so much fun doing so that the problem I have with this record won’t really impact you at all. At least for the first few times you put the record on.

Helloween suffer from the Illmatic curse. For those of you who don’t know, Illmatic was the debut album of Nas, one of New York’s most celebrated rappers. That album achieved absolute critical acclaim, is frequently considered the best rap album of all time, and cast a shadow over ever subsequent album he’s made due to none of them being quite as good. Keeper of the Seven Keys is on the short list of best power metal albums ever, if you look at it as a whole. If you split it into part one and part two, it’s on the short list twice. I never, ever expected Helloween to equal Keeper of the Seven Keys, and it would have been blatantly unfair to do so. However, the similarities can’t be avoided. In a void, Helloween is a great album. On a bad day, it’s the dollar-store version of this band’s opus from decades ago.

The bigger problem with Helloween takes longer to reveal itself. This band’s tendency towards spectacle has always been a strength, but it plasters over some of the frankly uninteresting moments that Helloween contains. The choruses are universally delightful. The verses less so. Helloween are full of excellent writers, and plenty of softer, less bombastic moments stick out. To Helloween’s credit, they make it easy to skip over the lesser passages, and everything goes through the ears smoothly. How little I cared about this while listening to Helloween is a testament to their songwriting, but acceptable filler is still filler, and the problem crept up as I listened to Helloween more and more. It didn’t ruin the album for me, but it did prevent it from being an upper-echelon release.

Helloween have released a record worthy of being a self-titled record. They’ve avoided most of the typical pitfalls of a band of their age and stature, and I’ve enjoyed every listen of this record. If you’ve ever enjoyed a Helloween album, listen to this. You’ll find more of what you like.