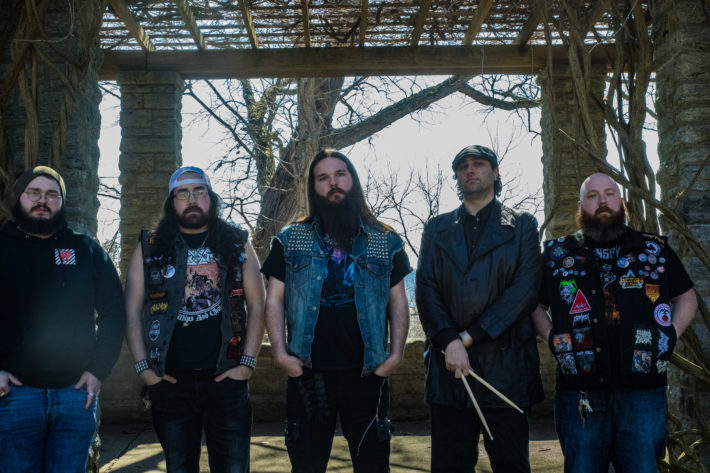 Solar Flare is power metal quintet from Cincinnati, set to release its self-titled debut on May 23rd; I had a chat with their singer, so here are his answers.

Hello, this is Rick! Who am I talking with? What’s your role in the band?

It took Solar Flare six years, as it’s stated on Facebook, to release its debut album; can you briefly walk us through the band’s history, tell us what has happened during these years?

Thank you for asking to keep it brief. The band was started by me, my friend Jake who was guitar player at the time, and our former drummer. We picked up another guitarist who didn’t work out in the long run, and three different bass players that all left due to either creative differences or life stuff being too busy for them.
After a bunch of shows and attempts at an EP, Jake left because he was starting a family; he was replaced by our buddy Garian, whom we were in a band with previously. The other guitarist was fired and replaced by Mark Greene, whom had just left his former band Split the Abyss. We picked up our best and most solid bassist Cody Bowling, who has been a beast in our low end. During the recording process our drummer Jeff left to pursue another band so we picked up Jordan “The Meek Greek” Cavalaris, whom was freshly out of a touring punk band that ended up being on a permanent hiatus.
We then started really putting our hearts, souls, blood, and iron into forging our debut album. Which we spent a year or more making sure our production was solid before releasing to all of you lovely people!

As a band, what would you like to achieve? What does it mean to be a successful artist to you?

Part of me wants to say “I already am” to some degree. I’m not famous or have a massive income; what I do have is art that I made with good friends of mine, and amazingly people enjoy it! To me that’s the greatest reward. It’s only our first album, but people are really digging it so far! I’d say that’s successful.

What part of being a musician do you enjoy the most? Playing live, recording, writing songs, answering to interviews, etc.

All of it. It’s part of the ride, and experience. Even as often as I’ve answered the, “how’d the band get the name” question. It doesn’t matter to me: I’m doing what I love and that’s the best part.

I’d define your music as power metal, although with a old-school, NWOBHM twist. What influences led you to develop this style? What artists do you look up to the most?

There’s honestly a lot of things I attribute it to. I’ve been influenced by several bands: Iron Maiden, Judas Priest, Blind Guardian, Queen, etc.
But that’s not the whole picture: having an opera teacher growing up and a modern rock teacher now has given me many new things to pull from, to create more of our own stamp on our genre or direction. In tandem with my bandmates’ approach to their instruments is truly what makes us special.

Were you all involved in writing songs, or did you have one or more “dedicated” writers?

I’d say we all work together. My mates flesh out the music mostly while I work alongside them, putting together the vocal melodies and most of the albums lyrics. We collaborated together on a few songs to hammer any kinks or lyrics.

What are you all doing while touring is suspended? You announced a release show on May 23rd, same day as the release of your self-titled album. Do you still intend to carry on with that, or have you got a hidden trump card?

Unfortunately we have to postpone the release show for now. But that’s fine, it gives us plenty of time to make the “Post-Quarantine Solar Flare released their album extravaganza” show of the year!
At least I think it’ll be a fun production with some crazy stuff we’ve got planned on stage; it would be foolish to miss if ya can make it!

As usual, thanks to these musicians for their time! If you don’t want to miss any of the band’s announcements – understandable – you can follow Solar Flare on Facebook, Instagram and Twitter, and you can find their music on Bandcamp.