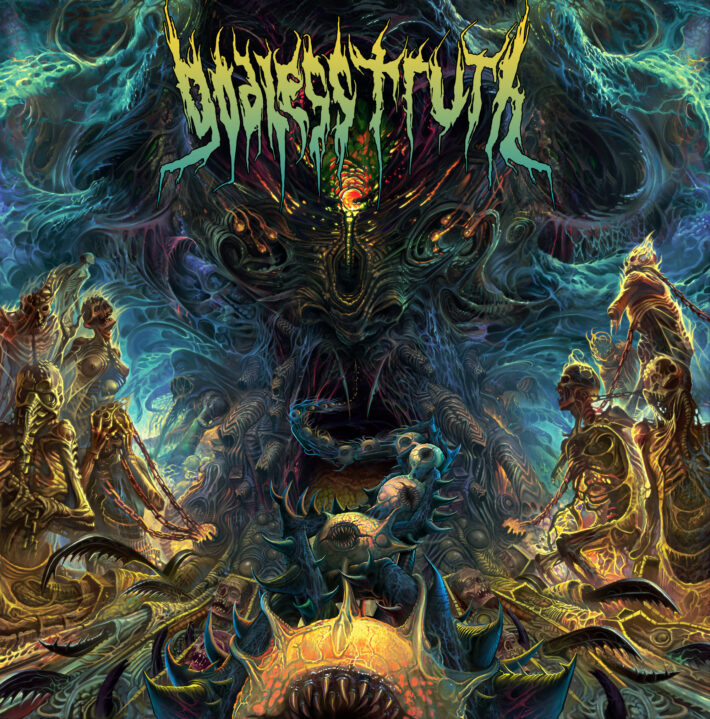 Godless Truth are a Czech technical death metal band with an alluring history. Their new self-titled release is their fifth full-length record since the band’s founding in 1994. During these 28 years, the founder has kicked everyone else out of the band, promoted the manager to vocalist, and seen the group go on a four-year hiatus. Godless Truth is the group’s first full-length release since 2004, and features guest appearances by members of Obscura and Psycroptic.

Godless Truth play within the clean style of technical death metal, similar to….well, Obscura and Psycroptic, but with a different vocal style than either. The band’s writing style reminds me of Necrophagist wearing a polo shirt, and the marketing material emphasizes the no-frills aspect of the music’s sound. Godless Truth do sound bare-bones and stripped-down within the confines genre. Instead of dazzling the listener, their path to success will be well-written riffs, song structures that emphasize heart-pounding and head-banging over musical exploration, and the frantic heaviness that only death metal can provide.

This album does effectively bridge the gap between the inherent chaos of technical death metal and a desire for simple and memorable riffs and choruses. The riffs, while providing sufficient quantities of wankery for tech death, stay within the realm of catchy, and the vocals seem designed for an audience to growl along at times. Godless Truth succeeded at creating a “panache and grit” style of death metal that holds onto the older roots of their sound without abandoning the last three decades of sound.

The guitar solos remind me that death metal can be fun. Solos in “The Decision” and “Bred In Greed” specifically stand out as highlights of the album, and prove that the group can play wild sounds when they want. The contrast between these solos and the repeating riffs that return to their bass note as often as possible highlights the strengths of Godless Truth’s songwriting approach – chaos when needed, restraint when needed, both complementing the other.

The album’s structure could have been better. There are two useless interludes within the first three tracks, and while I enjoyed the song sandwiched in between, that’s still a slow start. Neither the introduction nor the third track add anything meaningful to the record, either. For a band playing a “no-frills” style, this sure seems like an unnecessary frill.

I do question the marketing’s dismissal of the more ridiculous sections of technical death metal in the context of Godless Truth. Is this record truly less ridiculous than the legion of unnamed bands playing this stuff with superficial flamboyance? How does Godless Truth’s flamboyance come across as less superficial? No, Godless Truth isn’t Archspire or Braindrill. But this is still technical death metal. While Godless Truth has made serious art here, the flipside of the no-frills approach is that it also feels safe at times. I’d have preferred a record that was a little more out there, even if the attempts don’t completely land. Some of those frills that are missing can be quite nice, and the riffs don’t quite make up the difference.

Godless Truth is a good one. While this did feel like a boiler-plate tech death record at times, I thoroughly enjoyed the high energy approach. This record doesn’t break into the stratosphere like some of the more excellent tech death releases from the past few years, but it does stand on its own as a solid record worthy of your time. I recommend this to anyone looking for more technical death metal and for anyone else who is still holding out foolish hope that the new Necrophagist record will somehow turn out to be real.