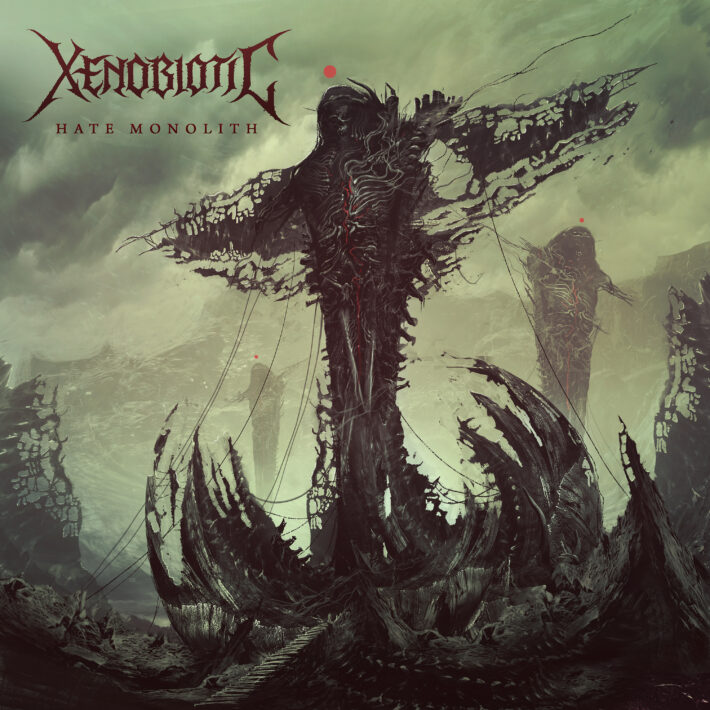 EPs live in a treacherous world. Sometimes you get two songs, sometimes you get over an hour of exploration. Sometimes a band will simply only have enough cohesive material that they deem worthy of release to fill up four or five songs. Sometimes a band will take some songs that didn’t make the cut for their last album, add a couple live tracks and a cover of their favorite Metallica track to tide over fans while they work on their next big release. On Hate Monolith, at least for the new material, Xenobiotic appear to have written new material specifically for this release. Mostly. The live tracks are not included in this review.

Xenobiotic are a technical deathcore band from Australia signed to Unique Leader Records with a heavy focus on atmosphere, and they sound exactly how you’d expect a band of that description to sound. Their 2020 release Mordrake was a dark and furious, intriguing record with a lot of upside, which was a surprise as the band’s previous 2018 release Prometheus was none of those things. What made Mordrake unique was the atmospheric elements. Xenobiotic can play fairly standard aggressive deathcore, and can do so with all of the performatic wizardry expected of a band with the word “technical” in their genre tags. As a backdrop to that, Xenobiotic added ambient themes that lingered on sustaining, dissonant tones. This ambience created ethereal tension, and was a good counterweight to the band’s brand of aggressive deathcore.

Hate Monolith retains this approach, but to a much lesser degree. Ambience was a core element of Mordrake, whereas on Hate Monolith it instead becomes something that they just happen to do in the background sometime. This torpedoes the uniqueness of the band’s sound, but is not a death blow. Xenobiotic are still supremely talented and their writing does not depend on gimmicks or microstyles to work.

This release is relentless. From the beginning on through, Hate Monolith is non-stop aggression. If this was a full-length release, I would quickly grow tired and bored. As an EP, Hate Monolith instead simply sounds like Xenobiotic exploring that extreme of their sound. There are a few shimmering guitar passages that provide a slight balance such as the outro of “The Wretched Strive” and “Nether”, but they never last too long. For twenty minutes, this aggression works just fine.

Xenobiotic’s ability to write riffs has improved. While I thought Mordrake sounded great, the riffs slid out of my mind like water. Some of these songs have catchy moments. With Hate Monolith’s lessened focus on atmosphere comes a greater focus on melodic lines, and the band shows their competence with this variety of style.

In terms of performances, the drumming sounds a little too mechanical when in a groove, but proves foundational in providing spice with excellent fills and a solid variety of beats. The guitars sound generic when doing their stuttering background riffs, but they are played with passion and good, intentional tone. The solo in “Pathos” works especially well. Vocals on Hate Monolith are entertaining, there are a few eyebrow-raising choices in the first track but even those are done well. This record’s production doesn’t do the bass any favors, but it seems to create good depth to the guitar sound. Xenobiotic would sound a lot worse with less bass. I hope they make it more prominent in future releases, as that could add to the band’s interesting approach to deathcore.

I don’t tend to judge EPs too harshly no matter what, but every downside of these releases grows more important due to the short length. Hate Monolith is exciting and has no bad songs. However, the elements of Xenobiotic’s sound that pushed that album over the top are missing, and Hate Monolith feels more like a generic deathcore release. By a band like Xenobiotic this is enough to result in a satisfying experience. Fans of this band and of deathcore in general will have a great time with Hate Monolith, and all others will not have their hearts changed. If you haven’t heard the band yet, I’d recommend starting with Mordrake. If you have, enjoy this snack before the next full meal.

Dead to a Dying World - Elegy Review
Deadbird - III: The Forest Within The Tree Review
Rituals of the Dead Hand - With Hoof and Horn Review
Aetherian - The Untamed Wilderness Review