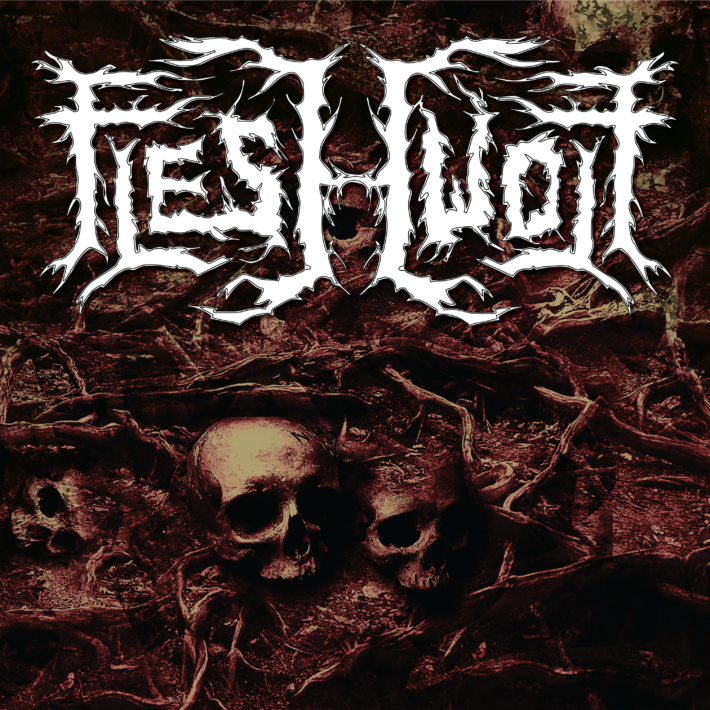 There is a common yearning among large portions of the metal world for more grime. More nasty, primal, low-fi, dirty trash to headbang to. In fact, this desire is so strong that bands like Darkthrone have been purposefully making their music more muddy to try to tap into this demand for decades. The assumption behind this desire is that the more an album sounds like it was recorded in some person’s basement, the less commercially driven, and therefore more honest and passionate, it will be. Fleshwolf’s debut self-titled album is as honest as it gets. Sometimes people should be careful what they wish for.

Fleshwolf is a death metal album that almost slots into the sound of cavernous death metal, but doesn’t quite descend all the way to that level. The primary focus on Fleshwolf is the riffs, as can be expected on any death metal album. Everything else falls into the background. Because this is an independently-produced debut album out of an underground one-man death metal band, don’t expect too much in the way of extraneous sounds. You’ll get your riffs, and you’ll like them. That is, you’ll like them when you can hear them.

I’ve complained about the production perhaps more than it deserves. Fleshwolf is at least listenable, if tinny at times, and I suspect that some of the grime present is an intentional aesthetic choice. Where the production really dings this album is in the vocals. They sometimes get buried. This is, again, probably an intentional move to keep the guitars and the almighty riffs the primary focus of the album, but it regularly backfired as I ended up ignoring the guitars to try to figure out what was going on in the rest of the sound. Outside of this issue, the vocals aren’t bad. They did a satisfactory job as a supporting instrument.

To repeat, the riffs are the primary focus of Fleshwolf. This cannot be overstated. This release lives and dies by how interesting the guitar vibrations can get. Unfortunately, there is more dying than I’d like across the length of the album. When the guitars get into a groove, Fleshwolf can be quite pleasing, but there are too many times when the riffs are too boring to hold me. Every song goes through these highs and lows, and the lows feel too stagnating to be worth sticking out at times. Occasionally (such as at the beginning of “Trench”), I am uncertain if the rhythm guitar was supposed to sound like it does, or if the guitarist was accidently swinging his notes at times, or if the production was just blipping out. After not too long, the lead guitar kicks into an excellent sounding syncopation and I temporarily forget about this issue, but the effect of these moments over the course of the album is cumulative.

Fleshwolf captures the appeal of the garage band. There is a reason that so many bands and so many labels across genres (not just in metal) do their best to strip down their music and to appear underground. Yes, there are problems with various parts of Fleshwolf that spawn from the independent production. But the honesty expressed here cannot be faked.

Fleshwolf feels like a glass half-empty/glass half-full type of album. On the one hand, some of the more boring moments can be a drag to get through, the production doesn’t do this album any favors, and the one of the only real positives going for this thing is the high-quality riffs, which are only present in bits and pieces. On the other hand, this is clearly a labor of love, when the riffs are on, they’re on, and everything comes together to form an almost archetypal death metal release. There are a lot of problems tarnishing Fleshwolf, but none of them change that it was ultimately an enjoyable experience for me. That doesn’t make the album great, but it could make it worth a listen.