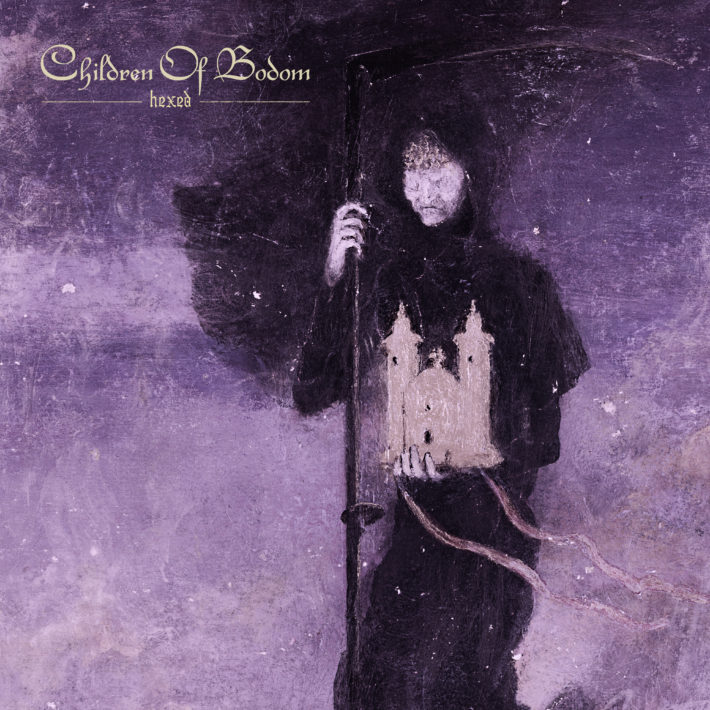 For any band, recording and releasing ten studio albums is an accomplishment–Children of Bodom has been at it for over twenty years now, and their career has taken a clear but divisive arc. Musically, it can be divided almost cleanly in half; they rose to fame with the style they realized on their first five albums, one of blisteringly fast guitar, melodic keys, and ambitious, harmonically constructed compositions. Signs of their newer sound started to show as early as 2003’s Hate Crew Deathroll and increased much further in 2005’s Are You Dead Yet? The five albums since, including Hexed, have all shared a similar approach, focusing more on riffs, usually with discordant constructions and unstable tonal centers. Whether you like one or the other or both, Children of Bodom’s commitment to heaviness and high-speed energy is one thing that’s remained constant over the years. Hexed is very much at home in the latter half of COB’s discography, and fans should know that this is in no way a “return to roots” for the band–it is, however, a decent metal album, and probably the best of the second half of the Bodom catalogue.

Everything in Children of Bodom runs, creatively, through frontman Alexi Laiho–he writes almost all of the music and lyrics, plays lead guitars, and performs vocals. His work as a young shredder twenty years ago earned him (rightfully) industry status as a guitar hero. Laiho has a lot of intrinsic strengths as a musician, and Hexed is most effective when it plays to those strengths. In their youth, Alexi and his friend/bandmate, keyboardist Janne Wirman, were passionate fans of the 1984 film Amadeus, based loosely on the life of the eponymous Mozart–the 1999 album Hatebreeder opened with a clip from the film and contained adaptations of several Mozart passages that appeared in it. It was appropriate. Laiho was, in many ways, similar to the young Wolfgang: ambitious, unique, wildly talented, but also reckless, irreverent, hedonistic, and as likely to be found raising Hell as composing. That album was a masterpiece, an impossible blend of complimentary styles, including NWOBHM, classical, and even black metal, all processed through unrestrained virtuosity and savage energy. Laiho’s natural aptitude for harmony and melody were splashed all over it. Not only is that what makes Children of Bodom’s music great, it’s what sets it apart from all other metal. Over the years their material has manifested Laiho’s distinct musical voice in various ways–what’s interesting is that although his inherent talent for harmonic music will seemingly vanish at times, it always reappears again. The variables are how often and for how long, because everything in between does little to separate Children of Bodom from the pack. The best thing about Hexed is that almost every song features at least one moment of harmonic coherence–and each is thrilling and deeply satisfying. The bad thing about Hexed is that these moments can be fleeting and infrequent, and they’re separated by interchangeable, low-open string riffs and confusing, frustrating chord progressions. Consequently, Laiho’s genius struggles to fully manifest itself.

It’s hard to attribute this to anything other than complacency–what Hexed lacks is ambition, and a little bit of arrogance. Children of Bodom have shown us that they’re capable of pushing the envelope with how fast, how melodic, how technical, how musically functional each song could be. Without that drive, a lot of the material on Hexed is still good, but it’s not quite special. It’s saturated with riffs that are angry, brutal and punchy but sometimes inconsequential. Half of the choruses are drab and lacking of exuberance. They play like a very talented band that has already done what they set out to and are now simply passing the time. Too many of the musical passages on the album wander randomly, following perplexing chord changes that imply no tonal center and therefore deny the listener of a sense of tension and resolution. Even occasional melodic fills and nicely-shaped phrases will occur completely out of key from their context, so the effect they would normally have is diminished. As a result, Laiho begins to resemble Mozart less and Salieri, his woeful antagonist, more.

Fortunately, this is not always the case, and when it comes to crafting impactful music, Hexed is a vast improvement over its predecessor, 2015’s I Worship Chaos, and probably the previous few records as well. There are many redeeming moments where Laiho’s genius gets to shine. The opening track, “This Road,” has a rousing energy and beautiful melodic pre-chorus riff. “Under Grass and Clover” uses enjoyable diatonic harmony throughout. The title track features an absolutely delicious melody with guitars and keyboard playing in unison, loaded front to back with intense, melodic content. “Glass Houses” and “Soon Departed” feature plenty of compelling material as well. But the star of the show is “Platitudes and Barren Words,” a forceful and hard-hitting track that features the album’s finest musical statement: a gorgeous key melody that opens the piece and recurs as the song’s chorus material. The sequence works because it has strong tonality and is harmonically stable as well as driving and energetic. It’s the same idea that makes the end of the main riff in “Knuckleduster” so effective, as the keyboards and guitars dance together and climb towards a powerful climax. Those moments of triumphant melody and musical completion are the epitome of what makes COB unique and interesting. If such moments made up the bulk of the musical content in Hexed, it would be a masterpiece, but when used sparingly, they simply embellish an otherwise decent metal album.

Everything else works. Laiho’s vocals are as strong as ever; he has a style of harsh vocals that you really don’t hear in any other band. The production is top-notch and as a result the record is sonically robust, with powerful drums, thick, crunchy guitars, and glassy keys all woven together in tight balance. The keyboard and guitar solos are tasteful and impressive. Even the bass gets significant focus and it really brings a depth and heaviness to the riffs. The cover art and visual design are probably Children Of Bodom’s best ever, as well. All the ingredients for a truly outstanding album are here, which makes it all the more tragic that there’s mediocre content corrupting it, but it is the band’s best release in almost 15 years, and that’s impressive for a group with such an extensive discography. It also shows that Children Of Bodom still have plenty left in the tank, and that they remain sovereigns of melodic death metal.

Tracklist:
1. This Road
2. Under Grass and Clover
3. Glass Houses
4. Hecate’s Nightmare
5. Kick in the Spleen
6. Platitudes and Barren Words
7. Hexed
8. Relapse (The Nature of My Crime)
9. Say Never Look Back
10. Soon Departed
11. Knuckleduster