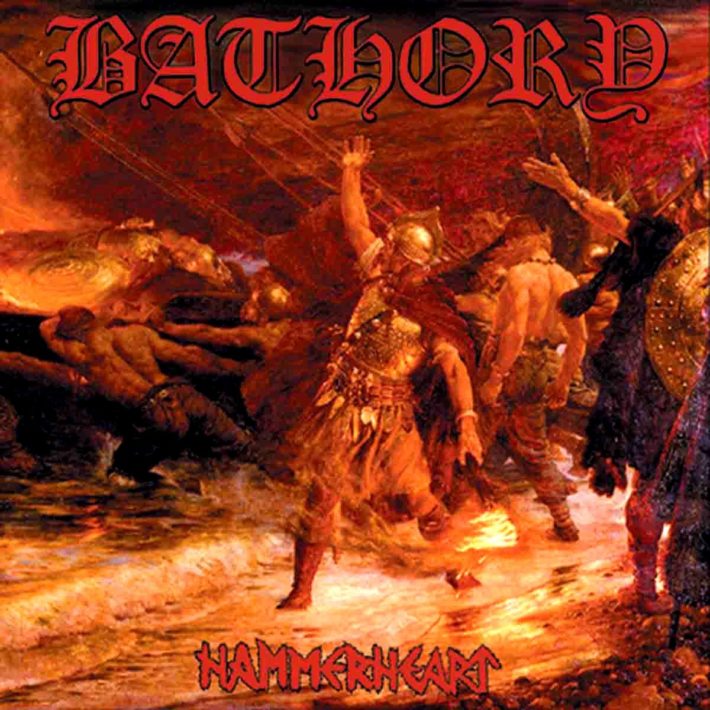 Tomas Forsberg, also known as Quorthon, was a rare figure in metal’s history. With early Bathory albums, including their self-titled debut and Under the Sign of the Black Mark, the band defined black metal, and paved the road for everything that would come after, from Emperor to Deafheaven. Yes, Venom’s Black Metal album that Quorthon obviously enjoyed immensely came first, but the music of Venom was so different from what black metal would become that it is not even recognizable as the same genre. Bathory was one of the bands that really kicked off the genre in a familiar way: low, crude production, evil rasps, extreme anti-commercialism. Black metal is Quorthon’s spawn as much as it is anyone’s. But then Quorthon got bored and decided to screw around with his band’s sound. Bathory’s fifth album, Hammerheart, released took their own child and combined it with the young genre of folk metal. Very few people have as much of a hand in creating one genre as Quorthon did. He managed it for two.

Hammerheart wears its black metal roots on its sleeves. You can almost see the glint of the sun off of the tin can it was apparently recorded in, and Quorthon often sounds like he has never sung before in his life. Quorthon’s snarling energy often forms a direct line back to the garage that he recorded their self-titled debut in. For a few fleeting riffs, it can feel as if you’ve been transported to rawer, younger days again, only they’ve been transported back with you and have taken improved songwriting skills with them. Bathory and Under the Sign of the Black Mark, for all their influence and acclaim, had their share of flaws that have trickled down to the genre they spearheaded. Hammerheart manages to make itself a much better starting point.

Despite the similarities to its older brothers, no one will ever mistake Hammerheart for an early black metal album. The anger and sense of evil are missing. There is no sense of the primordial on Hammerheart. Instead, the guitar riffs slow down, and Quorthon’s vocals are given background harmonies to help give shape to his admittedly strained yelps. There isn’t really anything fast or aggressive anywhere on Hammerheart outside of the occasional guitar solo such as the one featured on opener “Shores in Flames.” This isn’t to say that there’s nothing technically impressive about Hammerheart, just that Quorthon and friends make it all sound easy and effortless (well, except for the vocals) to such a degree that everything feels comfortable.

Here is where a complaint about Quorthon’s singing not being up to the task would typically go, but screw it, it works here. The yells that go beyond their breaking point give the upper end of Hammerheart some earnesty. Quorthon often sounds like he’s your drunk uncle, singing the same old tune that he’s sung at every family gathering since you were three. It fits the old and earthen feeling given here perfectly. As stated, the primordial evil of black metal has been abandoned for Hammerheart. Instead, this feels as if it belongs to an ancient tradition, as if it is a celebration of the hopes of humanity. There is still something old on Hammerheart, something that reminisces and pontificates on the origins of all of our music. Some of the trappings of the genre have drifted away. This isn’t an album made to sound like a classically trained musician spent years crafting their perfect gem, nor is it made to sound like an unholy archival stolen from satan’s blasphemous library, but it is rather made to sound like something dragged into existence by years of people who had never seen a written musical note. Yes, Quorthon’s singing is off at times. That’s the point. Hammerheart wouldn’t be as good as it is if everything was perfect.

It takes a lot to be improved by your faults. But that’s at the core of Hammerheart’s celebration. It’s easy to see why an entire genre of imitation spawned from this record. Very few albums have had the influence that Bathory found here, and very few that did still sound this damn good.