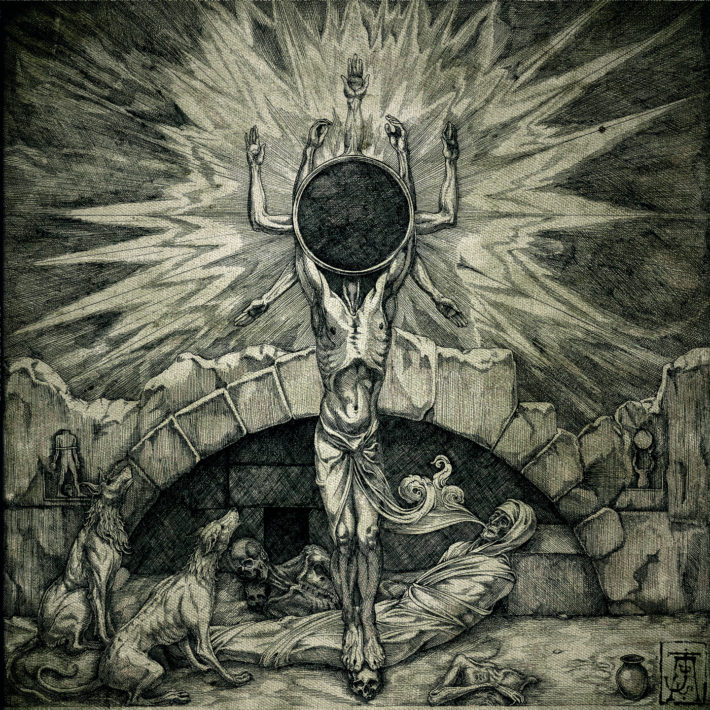 Deep Purple’s The House of Blue Light has always confounded me. Half the songs are incredible, and the other half are terrible. There are absolutely no mediocre songs on that album. How the hell do you process an album like that? How does an album like that even get made (outside of all of the drugs and the band members hating each other)? Tragediens Trone, the first full length release from the band of the same name, makes me fall into a similar pit of despair. Here, the quality of the release doesn’t vary much from song to song, but rather from instrument to instrument. The strengths of Tragediens Trone are quite impressive, but the weaknesses unfortunately outshine them at times.

The strengths of Tragediens Trone deserve their day. Skard, the lead singer and original member of the band, has vocals that stand out as the clear peak of the album, as his powerful howls carry the music well beyond where it should go. There isn’t really a lot of emotional or tonal variety to Skard’s roars, but nevertheless the power, authority, and emotiveness of his vocals never get boring. He seems to have complete control over everything he sings. It takes a lot for black metal vocals to stand out given the nature of the genre, but Skard nails it.

The tone of the guitars are also excellent. Tragediens Trone heavily leans on dissonance in its rhythm guitars to create an atmosphere and to allow for semi-continual resolutions from the dissonant to more open sounds, and the overall sound of the guitar helps this work better than it could have worked. Everything about the guitars sounds very intentional and even somewhat crisp through muddy production.

In fact, the atmosphere and production of Tragediens Trone are also excellent. Often, black metal bands will ape the intentionally terrible production of Darkthrone and others either out of incompetence or because they only know that it works for Darkthrone, and not why it works. Here, the somewhat less than perfect production helps evoke the exact atmosphere that Tragediens Trone were going for: This album feels like a relic from an ancient, desolate temple. It feels grandiose, unknowable, and distant. The vocals contribute to this, as do the guitar tone and the production. My first time through, I thought that this was an excellent album.

Unfortunately, the good times don’t last forever. If you’re only going to listen to Tragediens Trone as background music, it will sound excellent. But as the fog of their atmospheric intentions lifts, the flaws in the album start revealing themselves.

Tragediens Trone attempts to have some variety in the sounds present, but they don’t really succeed. There are quiet piano sections, chants, and pretty much whatever you can think of in terms of black metal tropes. What isn’t there, unfortunately, is interesting variety in their sound. All of the interludes sound either awkward or boring. None of the changes to their typical sound that Tragediens Trone attempted really lands as well as they needed to in order to salvage this album.

The songwriting gets really rough in places. I mentioned that this album heavily leans on dissonance earlier. Well, it does it too much. The progression from a dissonance, claustrophic chord to an open one is used repeatedly throughout the album, always in the same way and for the same purpose. I don’t know if Tragediens Trone actually used the same chords or not, but it certainly seems like they did. This doesn’t result in a hypnotic, trance-like masterpiece like it does on Dopesmoker or other overly simplistic albums that are still great. Instead, it makes it sound like the band didn’t have enough ideas for a full album.

The vocals and atmosphere don’t quite give Tragediens Trone the bump it needs to be a good album. If you set this on and forget about it as you do other things, you’ll probably enjoy it due to the excellent evocations the album delivers. But as anything other than background noise this is another black metal album on a pile of black metal albums that can’t quite climb to the top.