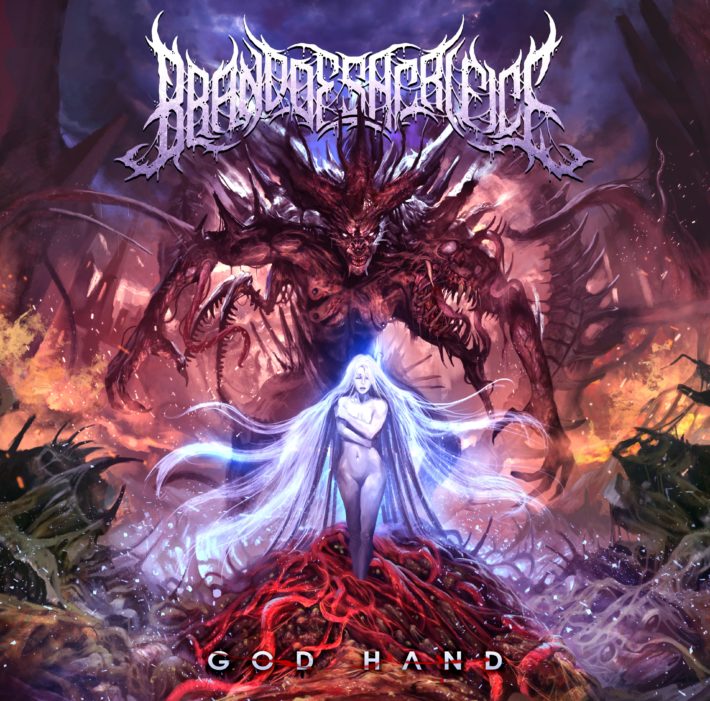 Sometimes, I put on a song from a genre that I normally don’t really listen to and I get so captivated by it that I can’t turn it off. Brand of Sacrifice is one of the bands whose music has this effect on me. Although there are some exceptions, I normally don’t really listen to a lot of tech death/slam, but when I got the chance to review this band’s first full-length record Godhand, I couldn’t help but take the opportunity. Godhand is Brand of Sacrifice’s second release, after their first EP, named The Interstice.

The first thing that stood out to me upon listening to the record was its diversity. There’s quite some bands in the genre that get monotonous after a few songs, but Godhand kept my attention throughout the whole record. In every song, there’s different elements that stand out. Some songs contain interludes, but there are also full songs that function as interludes. Some might say that 26 minutes is a bit short for a full-length album, but it actually functions really well with the energy level. It’s such an intense record that it shouldn’t have been much longer, because otherwise, it would’ve lost its intensity.

The first song kind of fades in, after which the band immediately shows their skill in playing their instruments. It quickly becomes clear that not only the drummer, but also the rest of the band has a great sense of rhythm, for they’re playing more than just some basic power chords. There’s also already a wide range of vocal styles to be heard, from deep, guttural death growls to high, shrieking pig squeals. All in all, the first song introduces the listener to the intensity that’ll be waiting for him/her. Divinity starts with choral sounds in the background and has quite some electronic riffs that play a well-composed duet with the guitars, alternating between the two. There’s quite some breaks that make the music even more dynamic. Instead of the energy level sinking after a few songs, it stays at the initial level throughout the first half of the record, something that, among other things, is accomplished by the variety in instrument sounds and vocal styles.

Hill of Swords is one of the songs that function as an interlude. It’s almost like a film score, with brass instruments, strings, synths and drums. After a while, there’s even a piano to be heard and about halfway, a choir appears to be announcing some kind of impending doom. It could be the soundtrack to a movie where someone is chased by a predator of some sort. The name of the next song, Claw Marks, actually might confirm this theory. The eighth song of the record, After Image, is the other ‘interlude’-song. It’s got ambiental synths, piano and strings that play something that sounds almost peaceful. It’s like when you play a fantasy video game and you encounter some sort of secret shrine, hidden in a cave filled with beautiful nature (for the Skyrim players around here, something like Eldergleam Sanctuary).

However, if you thought you were staying in this beautiful place, you’re quickly proven wrong, because in Beast of Darkness, the aggression of the first half of the record abruptly comes back, reminding you that you’re still listening to a tech death/slam album. This track, together with the last one, God Hand, make for an intense finale to the record. Near the end of the last song, the tempo diminishes bit by bit, but instead of also getting softer, it’s like the intensity of those many blast beats gets concentrated in the few beats that are left. The fade-in at the start of the record and the fade-out at the end could imply that you’ve only witnessed half an hour of something that lasts a lifetime.

In short, Godhand is a well-composed, intense record, full of variety and energy. It’s got a wide range of instruments and vocal styles, and the interludes between the songs make it even more dynamic than it already is. It immediately convinced me, someone who doesn’t listen to a lot of music from this genre, and I’m sure it will have this effect on many others. Everyone should give it a spin, for it’s got a lot to offer!