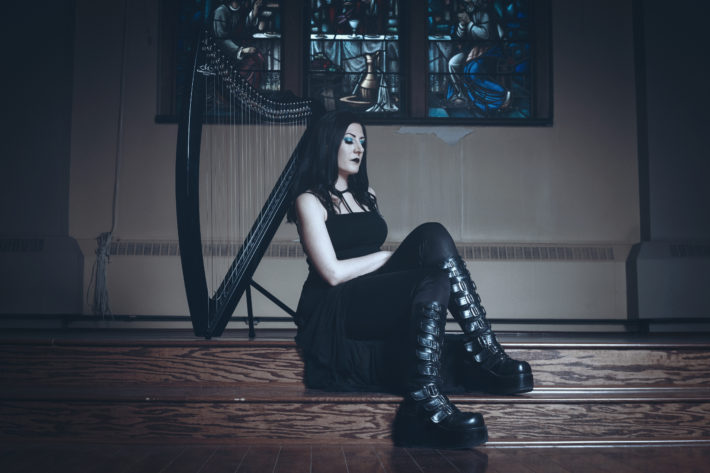 Good morning Lindsay! How are you today? Are you excited for your new album?

Hey!! I’m fantastic thanks! And yes I am! The response so far has been really great.

The album, “Martyr”, is co-written with former Evanescence drummer Rocky Gray; you have previously expressed your appreciation for the band many times too. How did the idea of working with him in particular started?

Rocky contacted me on the new year of 2016 and we got chatting. Turns we were big fans of one another. A few days after the initial conversation he asked me if I wanted to start working on music together. After a minor fan-girl freak out on my end, we got straight to it.
Every song creation was such a smooth process. We were mainly on the same page on a lot of ideas and creative directions. Guitar and drums are not my forte so he completed me in that department. After we completed the cover of The Cure’s “Lullaby” within the first month we got onto other original compositions right away. By the beginning of 2017 we already had seventeen songs to work with and a few got cut, but they could be used for future releases!

Your record features a song with Xenoyr, the singer from Ne Obvliscaris and also co-creator, alsongside you, of classical/black metal band Antiqva. Said song, “See the Light”, is arguibly the most ‘metal’ song on the album, with a strong industrial-like riff and melodeath chorus complete with growls.
Did you write the song with Xenoyr in mind? How did you and Rocky decided on including a song so different from all the others into the album?

I absolutely heard Xen’s voice in it the minute I started writing the lyrics for the chorus. The demo of his song was something that was not used for We are The Fallen (Rocky’s other band with former members of Evanescence) so I decided to give it a shot. It may be here [the] heaviest track on the album, but it be silly not to include it.

“Martyr” ends with “Lullaby” a cover of the 1989 Cure classic.
The Cure are, obviously, the staple of gothic rock. Why did you choose to end the album with a cover song, and why this song in particular?

Rocky asked me about doing a cover and it was top of my list after being recommended by my drummer Scott. Once I mentioned it, Rocky got straight to creating it and I was really blown away on how amazing it turned out. Of course we’re both really big fans and I think it was also something people were expecting in the new school sound.

On your website, you stated that you like to study astrology, to sketch, to go looking for old churches and graveyard — and how you cook yummy vegan meals! What was your daily routine while writing the album? Did you really went visiting old churches?

Well, I mean, I filmed the music video for Savior in one!
Currently my daily life is just hectic around releasing the album from home and doing these last few gigs with Cradle of Filth. I barely have the time to chill out and do what I want anymore. But I plan to get back to the music in November and December so there is that!

You are a classical trained musician, who not only sings but plays the piano, guitar, bass, harp, and other instruments too; as in Cradle of Filth, your work here has clearly roots in classical music but it definively has a gothic, heavy rock soul. Why did you decide to expriment with this one genre? Who would you say were the classical composers whom influenced you the most on this record?

I think my love of classical music is more shining through on my side project Antiqva right now. With working with Rocky and creating Martyr this is the music I’ve always wanted to make and the music that I’ve been a fan of for a very long time.

You have always been rather restless as a musician, appearing in numerous feature with different artists (noticibly this year on Belzebubs’s debut album “Pantheon of the Nightside Gods”) and taking part in different bands. This time though it’s something totally different, as this is your very own solo album. Is this the start of something, of a definite solo career? Or a ‘once-in-a-lifetime’ project, an experiment?

I’m already gathering songs to work on my next solo album. It’s what I enjoy and live doing the most and now that I have a great team and band in place how can we not keep going?! The future is open to anything and I’m excited to see where it goes.

The album is self-released. Of course today, self-producing music is easier, with enough time, dedication, and a bit of equipment. Still, it’s an interesting choice; why did you two, famous and well-published musicians, chose to self-produce the album, instead of going through a record label, even an underground, indepentent one?

Well we did have Tyler Williams at Monolithic Production there with us to help us produce the album. I honestly got sick of people not getting back to me and making me wait around for 4 months so I took matters into my own hands and with the right research and planning these days it isn’t hard to become your own little independent mini record label.

And finally, perhaps not a very original question, but I think this is on everyone’s mind: will you perform this album live, perhaps with Rocky? This year’s Cradle of Filth tour is almost finished — will you get back on the road?

We’ve asked Rocky to come join us on stage, but he’s such a homebody these days working on his film scores. We are working on plans to do some shows during the time Cradle isn’t touring. All info can be found at www.lindsayschoolcraft.com when we post it.