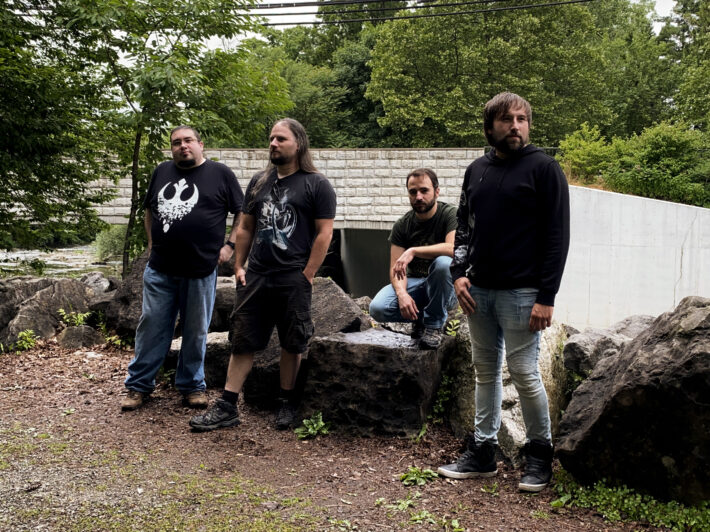 Buffalo, NY-based quartet The Last Reign have released their sophomore album a little more than a month ago. I talked to the band about the peculiar way the album was supported, 90s melodeath and other interesting matters…

Hello, this is Rick. Who am I talking to, and what’s your role in the band?

This is Bran Platter. Founder, guitarist and primary songwriter.

For this album, you collaborated with author Michael Marlinski, who wrote the sci-fi book “Evolution of a Decaying Race”. Had this been planned from the start? Was the album written before or after the book?

Mike was the original vocalist of the band and left back in 2017. Prior to that, we were working together on the concept album and the idea of releasing a companion novel. After some time had passed and I put together a new line-up in 2019, we revisited the idea and it finally came to fruition.

And speaking of this… “lyrics or music first?” is an age-old question, yet I think it becomes more relevant when talking about a concept album, where those two aspects truly walk hand-in-hand. So, how did you coordinate writing the lyrics and the music? Did the whole band do the writing together, or did you have dedicated writers and composers?

As a songwriter, I’ve always found a balance of both. Sometimes the music comes first and other times the lyrics do. In this situation, the concept evolved between Mike and myself simultaneously; while I took on the musical duties, he took on the majority of the lyrics. One aspect that was new to me was writing songs in succession. it was a great learning experience.

The album covers most of the chapters in the book, but there are a few remaining where we could revisit. Possibly in the form of an EP finishing the story. I doubt we would go beyond that.

You launched (and completed) a Kickstarter campaign to support the band and further stages of album production. Do you think this will be a common reality for independent bands? Was crowdfunding a useful tool for you, as an “aid” to more traditional ways of support, such as Bandcamp?

Truth is, Bandcamp is great, but unless you’re a relatively big band, you don’t get sales like you would from playing shows which aren’t an option right now or for the foreseeable future. Kickstarter was definitely useful. We really used it as a pre-order mechanism for Evolution merchandise. It was an excellent way to gauge which items our fans wanted so we could order accordingly. It also took a ton of pressure off of what would have otherwise been a substantial personal investment from the four of us.

You said you wanted to honor the Melodic Death Metal movement of the late ’90; how do you create a balance between honoring the past, and shaping the present? How much do you think melodeath has evolved and changed in more than 20 years?

It’s certainly a difficult thing and although the album has been generally well received, some notes have been that we’re not pushing the boundaries enough. I can certainly see their point, but that’s not what we are going for. The Melodic Death Metal from the 90s was it’s own thing and is very different today. I still enjoy some modern melodic death metal bands, but it’s not the same. I just wanted to pay homage by giving the world an album that would hopefully fill some of that void.

Many thanks to Brian for this interview! “Evolution” was released on September 18th and can be found of the band’s Bandcamp page. And don’t forget to follow The Last Reign on their Facebook, Instagram profiles!