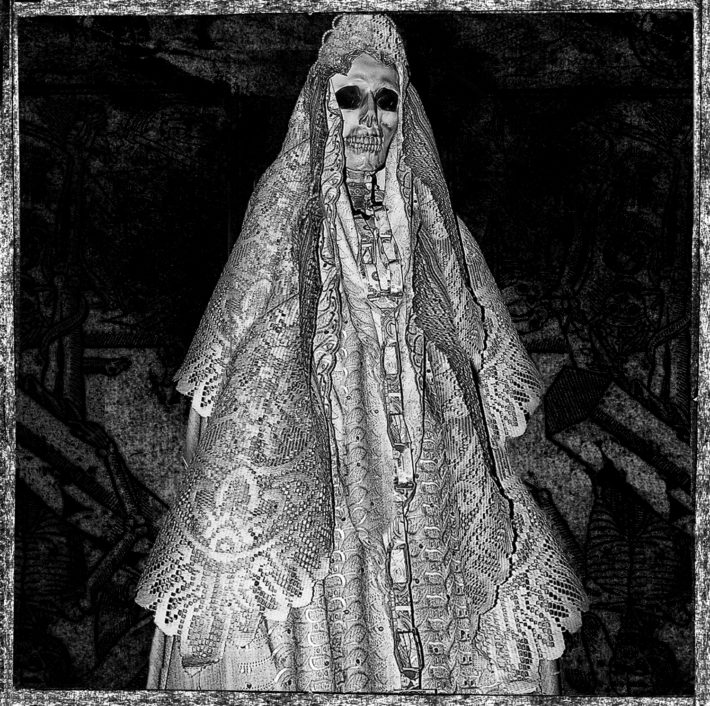 If you know the name Maurice de Jong, or his stage name ‘Mories’, you probably know about his numerous projects and the huge amount of albums he releases each year. To give an idea, he’s released 52 full-lengths, EP’s, and splits since 2006 under his main project Gnaw Their Tongues, and apart from that, he’s got about 23 other active side projects. You’d think that with so many releases and projects, his music would have to be uninspired or repetitive, except it’s everything but. Each project has a different sound, ranging from avant-garde experimental noise, to dungeon synth, to black metal in every possible form. Mories covers all the darkest corners of the musical spectrum.

One of these projects is Dodenbezweerder (Dutch for Necromancer). It’s a relatively new project (the first demo was released last year), in which he works together with a drummer known as SvdAA. This is their first full-length, called Vrees de toorn van de wezens verscholen achter majestueuze vleugels (Dutch for Fear the Wrath of the Creatures Hidden Behind Majestic Wings) and it’s  On their Facebook page, they describe their music as “Necromantic improvisational Black Doom,” and honestly, it’s quite a good description. The album has a uniquely eerie atmosphere. The guitars have almost lost what makes them sound like guitars, there’s disturbing vocals that could belong to both the necromancer as well as the familiar that’s being conjured, and it’s got synth-like sounds that create an otherworldly atmosphere.

The album starts with a seemingly simple drum beat over which noisy, distorted guitars and synths quickly join in. The mood has immediately been set for the rest of the album: from the first moment you know it’s going to be intense and uncomfortable. After a while, Mories’ recognizable screams are heard in the distance. Apart from these distant screeches, there’s also some deeper vocals that sound a lot less far away (in terms of volume and reverb). In the context of this record, these deeper vocals might be the necromancer’s, and the more distant, higher-pitched vocals might belong to the dead that are being conjured. During the more tranquil interludes, you can hear an ever-present, dissonant ambient sound that makes even the relatively quiet passages very uncomfortable. The record, in general, feels really claustrophobic. This can especially be heard on songs like Als het vuur van mijn toorn is ontstoken zal het branden tot in het diepste dodenrijk. The track starts with a few cymbal hits, after which the full instrumentation comes in and the music immediately sounds kind of suppressed. It gives a feeling as if the music isn’t fully present in our world, but instead floats somewhere between the world of the living and that of the dead.

As opposed to the rest of the album, Opgeslokt door de ontzielde leegte, the third track on the album, has almost a consoling feeling. Here, the ambient synth has a prominent role, and gives the track an ethereal sound. Sound-wise, the song is kind of similar to one of Mories’ other projects, called Golden Ashes (if you don’t know it, check it out, it’s a synth-heavy mix between black metal and drone, with a surprisingly pleasant atmosphere). However, the consolation that could be found in this song is quickly disturbed by the next song, which immediately brings back the dissonance and distortion that we know from the first two tracks. On songs like Zalf de voeten van het hoofdeloze lichaam, you can really hear how the tension is built up. It starts with a dissonant soundscape like the rest of the record, but if you listen carefully there’s also a subtle high-pitched lead that gradually ascends, thus increasing the tension without you knowing exactly how it happens. The album’s final track, Haat in het aangezicht van de verscheurde zielen, starts with an intro that’s similar to the first song, except this one sounds way more compressed and claustrophobic, both implying a cyclic aspect to the album as well as a narrative development over the course of the record.

Overall, Vrees de toorn van de wezens verscholen achter majestueuze vleugels is something you rather experience than listen to. At first glance, the soundscapes could be daunting and difficult to digest, but the different aspects of the music invite you to put it on again and again. While there are aspects that are similar to Mories’ other projects, Dodenbezweerder has its own sound, only enriching his ever-expanding discography with another, in my opinion very successful project. I highly recommend you give it a spin, for experiencing this record is not really pleasant, yet very intriguing.