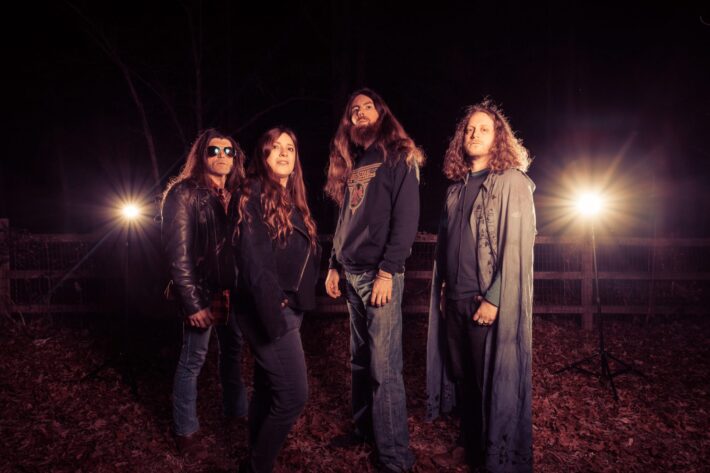 They describe themselves as outer space heavy metal. Born out of a mutual love for heavy riffs, retro synths and a hundred more musical elements, Book Of Wyrms are a quartet from Richmond and they have just released “Occult New Age”, their fascinating third album.

Hello there, this is Rick. Who am I talking with? What do you play in the band?

Jay: This is Jay, or Jake if you prefer. I play bass. On the couch to my left is Sarah, who sings and plays various synths.
Sarah: Hello, Rick! What he said is true.

Let’s start with a bit of history – I understand you’ve been through a few lineup changes, including a shift from two to one guitar: what prompted you to make this change? Is it much different to record as a quartet?

Jay: Yeah that’s definitely part of being in a band, and I think it’s actually something to be expected if your band is together more than a year or two. People’s lives change and they realize they want to do different stuff. Our guitarist Ben left around the time we recorded the last album, “Remythologizer”. He apparently didn’t like the rushing around and stress of touring, and I’m sure he’s happier now. There aren’t that many people out there who dig spending days at a time in a smelly van and wolfing down peanut butter crackers in bad weather.

It was definitely a different recording experience. For one thing, COVID was doing its shit, so at practice we were masked up and we didn’t hang out much during tracking. We also didn’t get to tour the new material, which I’d grown used to. It was sort of like running with your eyes closed – nobody but the band had seen or heard these tracks, so you’re just hoping people react positively but the insecure artist in me was convinced that nobody would dig any of it, since I hadn’t seen crowd reactions. Everything is a little easier with one guitarist, in terms of making things fit and everyone getting their moments, but it was more challenging in terms of everyone needing to step up their sound and their playing. The best result was that it forced us to embrace minimalism, like asking ourselves if a particular song really needed one more layer. So there’s less flash maybe, but everything is more elegant and logical.

Now about the album itself, I haven’t had the pleasure to read the lyrics – walk me through them: what are their themes, how are they connected to the album title?

Sarah: The album begins with “Meteoric Dagger,” a sort of metaphor for finding your purpose in life and how it can mean everything. It can make life make sense. “Colossal Yield,” the next track, is about a plant that “just keeps on growing.” That first line is what I thought of initially as the guys started playing this tune. The plant starts devouring, molecularly, the flora and fauna surrounding it and perhaps gains sentience.
“Hollergoblin” is the next song with vocals, and it came about after Jay and I got lost driving in the mountains one time. The roads kept getting smaller, but the GPS told us this was the right way. Eventually the road just kind of stopped and there was a cliff below, the holler. I don’t think I’ve ever turned a car around so fast. We definitely shouldn’t have been where we were and could feel eyes watching us. Then we watched this Amazon Prime special called “Hellier” and when they mentioned “hollergoblins”, a spark was lit.

“Keinehora” is a Yiddish saying that means “no evil eye.” There are many different spellings and it’s kind of a difficult term to find consistent information about. It’s almost like knocking on wood when you say something like, “I’m going to have a great trip tomorrow” so as not to “jinx” the trip. But it also refers to when one is boasting about anything, because that thing could be taken away tomorrow. I did a lot of research on this and the lyrics are a lot of ways I found to ward off the evil eye. Some of the rituals are cool as shit, some not so much.
“Speedball Sorcerer” is about bees and the way they communicate as a hive with “chaos magic.” We just liked the way it sounded and it worked because Jay had been reading about bees in The Hearing Trumpet by Lenora Carrington.
“Weatherworker” title came from the Ursula LeGuin book “The Wizard of Earthsea”. I wanted to write something about someone who could control the weather, and so I read Ancient Meteorology to read about patterns in nature throughout time that signal changes in weather. The book included excerpts from Plato and Pliny and really stoked the brain fire. “Dracula Practice” is about a squirrel who dangles from our bird feeder, always practicing his Dracula moves.
The album title “Occult New Age” sort of references the weird time we’re living in as well as being a follow-up to our debut album Sci-Fi/Fantasy, named after a section of a bookstore.

Aubrionlilly is a song that has fascinated me; it obviously stands out from the rest of the tracklist and it is very different, yet it’s perfectly connected to the other songs. Why did you decide to include it, and how was it written?

Jay: That was all Kyle. On the last record, I’d done a little atmospheric interlude, and we really liked how it breaks up the mood of the album. Sabbath did that a lot – they’d bring the album down with something chill and instrumental. It just makes the heavy songs stand out but it also kind of buys you some time before the listener gets burned out on big loud riffs. Like some sorbet between courses, I guess. So anyway, we knew we needed something like that and Kyle said he had an acoustic song. He never showed it to us or got any input from us. We just trusted that it would be cool, and so he put it down during his overdubs and we never even heard it until it was done. It was perfect and did exactly what we wanted it to do for the album’s pacing.

Just like on your previous works, here you display a very defined and curated sound; how was it crafted? What were you aiming for when you decided to go for it?

Jay: I’ve always wanted to do something a little different, and to incorporate some of the influences I love that come from outside metal. So there’s clean tremolo guitars, sine wave synths, spacey string pads, and acoustic guitar mixed into the sound. Heaviness is important, but it has to be interesting, and layered. What you’re hearing is the prog, funk, and psychedelic influences shining through, and maybe some of my years of experience working in studios and recording my own shit. The vibe we try to create is weird and interesting, without getting too slick or obnoxious. Everything we do is towards a goal of an epic and riveting listening experience, and for me that’s always meant pulling from a diverse group of sounds. Hopefully there’s a balance to it, where the cool little flavors show up but don’t take over.

Speaking about sound, many new bands lately have been using a somewhat 70s-inspired sound; do you think it’s a choice that’ll become more and more widespread? Is the return on this sound a kind of “occult new age”?

Jay: Hopefully some of our non-70s influences shine through – 80s metal, 60s psych and soul, and Soundgarden and the Melvins. We try to let all the influences bubble up unintentionally, sort of a random sampling of the shit that moves us.

I think the biggest offenders of the 70s retro cliché are taking a lazy shortcut – grabbing a few superficial sounds because it helps them market themselves. But some of them also think Black Sabbath only played slow riffs in blues scales, so of course they’re gonna bum everyone out.

I don’t know if that aesthetic is going to get more widespread than it has, because there’s already a sense of backlash to some of it. Most of the artists I find truly inspiring happened to come from the 70s – Hawkwind, Sabbath, Judas Priest and UFO, WAR, Band of Gypsys, Funkadelic, Yes and ELP, and ZZ Top. I’m going to like what I like and the band is going to sound how it sounds, and there will be years where that’s cool and interesting, and there will be years where some people think it’s cliché. Those people are full of shit, because good music stays good and bad music stays bad, and it really shouldn’t matter what year it is when you’re listening.

Sarah: I think the 70s sounds are a classic that weren’t given true respect in their day and for decades after. My history of rock classes in college always skimmed over the 70s saying that people relied more on technology than actual musical talent, which I believe was supremely short sighted. To gloss over the 70s was a mistake so we are going back to do it over right. But now that the 1990s grunge and hip hop have happened, you can’t ignore those influences and more. Anyway, I think that we’re all embracing that synthesizers are more than a fad.

You are now on your third album – something that’s often regarded as a band’s most important one. Did you ever think you’d come this far?

Jay: I never really think very far ahead – I’m usually problem-solving whatever’s right in front of me, whether it’s getting a record finished or getting a tour booked. On top of that, I always think I’ve got terminal writer’s block and I’ll never write another good riff again. So no, I honestly never did think I’d be here.

Sarah: I had no idea we would still be a band this many years later. We are really lucky. There are so many factors that work against forming a band, from life changes to scheduling multiple adults to appear in the same place at the same time, personality conflicts, chemistry, and more. We have all worked really hard but are also lucky.

What would you say is your next move as a band? What comes next for Book Of Wyrms?

Jay: I want to play a bunch of fucking shows! I’m starting to write again, but I just miss being onstage, and even just joking around in the van and searching new towns for pizza and comic books.

Sarah: We are hoping that we can start playing shows again this fall. I think the band is planning on attending (not playing!) Dokken with George Lynch and Lita Ford in July at the local Harley Davidson. We want to make a video perhaps. Get some new shirts printed with new album art. We can’t wait for our vinyl to be pressed and sent hopefully this summer. Thank you for asking us these questions and taking the time to write us up.

Thanks a lot to everyone from Book Of Wyrms for this interview! “Occult New Age” was released on May 7th and you can check it out on Bandcamp; and while you’re at it, you can also follow the band on Facebook, Instagram and Twitter.