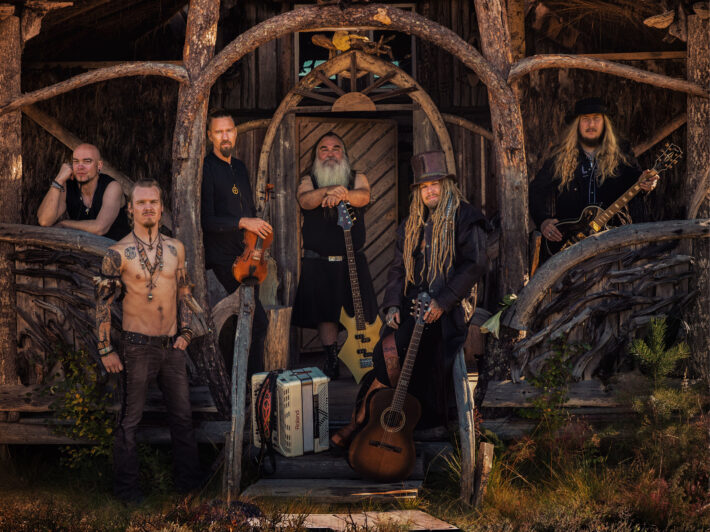 Folk metal superstars Korpiklaani are back at full strenght with their upcoming album “Jylhä”! In preparation for this release, I had the pleasure to have a chat with their guitarist Cane.

Hello, this is Rick. How are you today?

Hi, I’m Cane. I’m doing good! Hope you are fine as well. We are having a real winter here in Finland for a change. I mean there is half a meter of snow everywhere. That’s rare nowadays.

How was the atmosphere in the studio while working on this new album? Did you manage to meet and play together or was it recorded during lockdown, socially distanced?

Atmosphere was great once again. Restrictions didn’t bother almost at all. We couldn’t use the studio originally booked, but that was the only thing we had to change. Album recordings were already planned before the lockdown, but it gave us a lot more time to work with the pre-production because no shows were played. We recorded all the instruments in Jonne’s home studio once before the real recordings, which is unusual for us. So all the arrangements were clear and it was easy to continue from there.

You returned to producer Janne Saska, who had already worked with you on “Kulkija”. What made you want to work with him again?

We really liked Janne’s work and methods last time, so we wanted to feel that again. That’s very simple. And again I can say it was a right choice. It is really easy to work with him as he understands what we are looking for. We also used his studio in Hämeenlinna, which was nice as it is not that far from us.

You’ve released more explosive songs such as “Niemi”, and lighter ones like “Sanaton maa”, so “Jylhä” definitely won’t be found lacking diversity; overall, how’d you say the album sounds like? I’m extremely intrigued.

I think the diversity comes from the fact that we don’t limit ourselves much when writing music. I remember Jonne telling us that this will be our heaviest album ever when he started writing songs after Kulkija. Well, maybe it’s not the heaviest but it may have the heaviest parts. Our albums are always the bunch of latest songs written. Different emotions generate different kinds of songs as we don’t want to force them in a certain form.

Among the singles already released, “Niemi” really caught my attention because it tells of the Lake Bodom murders (which notoriously inspired another Finnish band, Children of Bodom); what prompted you to tackle this story? It’s kind of unusual for the band, usually more focused on Finnish folklore and alcohol!

There are few old Finnish murder stories in the album lyrics this time because Tuomas Keskimäki, our lyricist, was into the topic at the time. He was reading old books and other material related to these things. Bodom murders was just one among the others. But what a coincidence that our song telling the story is released at the same time Alexi (Laiho, 1979-2020) passed away.

You did a streaming show back in August to present your vodka, how did it go? Do you think streaming shows are here to stay, even after this pandemic?

Technically good. It looked super, we had fun and the vodka was launched. I personally don’t like to watch stream shows and don’t think they’re going to be here more than they were before.

Speaking of shows, in what ways has the lack of touring affected your plans after the release of “Jylhä”? Korpiklaani always had a strong live presence, something that was perfectly captured in the recent “Niemi” videoclip.

Touring is obviously the best way to promote the new album and that is not happening now. There is not much more you can do. Nonetheless we wanted to do something different and decided to release five full budget music videos from all the singles. We had the same actor in all the videos and the story continues through the whole saga. Only the one for “Niemi” was just an old school playing video without the actors.

Would a drive-in gig work for you?

I think any kind of gig would work for me now.

Nowadays there are more and more bands from different corners of the world heavily incorporating folk elements into their music (such as The Hu or Alien Weaponry), and you are regarded as folk metal superstars – do you think your music has helped to pave the way for these bands?

I don’t want to take too much credit but of course. Someone has to be the first. Think how much more open-minded people are nowadays than sixty years ago for example. People are more going back to their roots. It’s not anymore looking for an American or British sound to get heard.

And finally, Korpiklaani has been around for almost 20 years now, are you planning on something special for this anniversary?
Thank you for this interview!

Nothing planned yet, we have still two more years to go. I think we might come up with something special when the time comes. Thank You! Hope to see you all soon! Stay safe and healthy!

Thanks again to Cane and all the guys from Korpiklaani for their time! “Jylhä” will be out on February 5th 2021; in the meantime, check out the band’s official Twitter, Facebook, and Instagram pages!